Not carrying weapons, following fixed routes and entering Delhi with tractors sans trolleys, were among the several conditions set by farmer leaders and police that were violated by participants of the tractor parade in New Delhi on Tuesday. 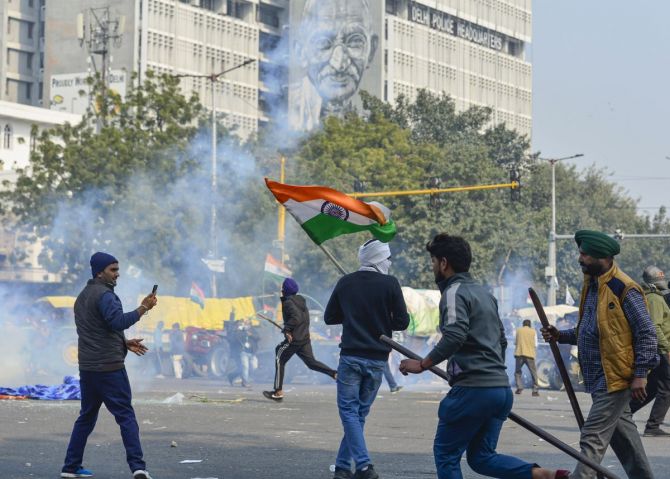 IMAGE: Protesting farmers clash with the police during their tractor march on Republic Day, in New Delhi, on Tuesday. Photograph: Ravi Choudhary/PTI Photo

The condition that more than five people will not be seated in tractors was also not followed during the march which turned violent with people opposing the Centre's new agri laws and police clashing at several places of the city.

Leaders of farmer unions had on Sunday outlined conditions for the tractor parade in Delhi.

They had appealed to the participants of the tractor rally on Republic Day to maintain peace and asked them not to carry weapons, drink alcohol, carry banners with inciting messages.

Protestors were asked to specifically follow three routes originating from the Singhu, Tikri and Ghazipur border points of the national capital.

The conditions were agreed upon by union leaders after meetings with the Delhi Police.

It was also decided that the tractor rally will start after the Republic Day ceremony concludes, but a section of farmers started it before the scheduled time.

Some farmers from the Singhu and the Ghazipur borders deviated from the fixed routes and headed towards Delhi.

The farmers removed barriers as they pushed ahead and clashed with police personnel who tried to stop them.

At many places they were seen carrying sticks, swords and other sharp-edged weapons and chasing away policemen.

The farmers who drove from the Ghazipur border to ITO and later reached Red Fort clashed with police and were seen hitting policemen with sticks.

Some protesters near Akshardham were also seen carrying swords and chasing policemen.

As police tried to control the mob of protesters firing tear gas shells, it retaliated with stone pelting and damaged many vehicles, including buses and police vehicles.

The Samyukt Kisan Morcha called off the tractor parade by farmers on Tuesday and appealed to participants to immediately return to their respective protest sites.

'We have called off the farmers' Republic Day parade with immediate effect and appealed to all participants to immediately return back to their respective protest sites,' the farmers' union body said in a statement.

Earlier on Tuesday, the Kisan Morcha disassociated itself from those who indulged in violence during the tractor parade, and alleged that some 'antisocial elements' infiltrated their otherwise peaceful movement. 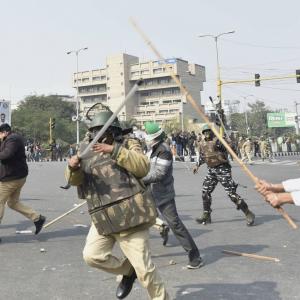