Deviating from the designated route for the proposed tractor parade, a section of protesting farmers entered the Red Fort on Tuesday and hoisted flags from some domes of the iconic monument in the national capital. Pushed back by the police from the ITO in Central Delhi, a section of the protesting farmers drove their tractors to Red Fort complex.

The crowd swelled at the monument as some protesting farmers and 'Nihangs' (traditional Sikh warriors) were seen entering the Red Fort and hoisting a flag from the staff from which prime minister unfurls the tricolour on Independence Day. The saffron flag hoisted by protesters from a staff at the iconic Red Fort on Tuesday was the  'Nishan Sahib', a symbol of Sikh religion seen at all gurdwara complexes.

The 'Nishan Sahib' is a triangular flag that is sacred to Sikhs. The emblem on the flag comprises of 'Khanda', a two-edged sword, Chakra, a disc, and two iirpans that cross each other at the handles.

The other flag appeared to be of a farmers' union. 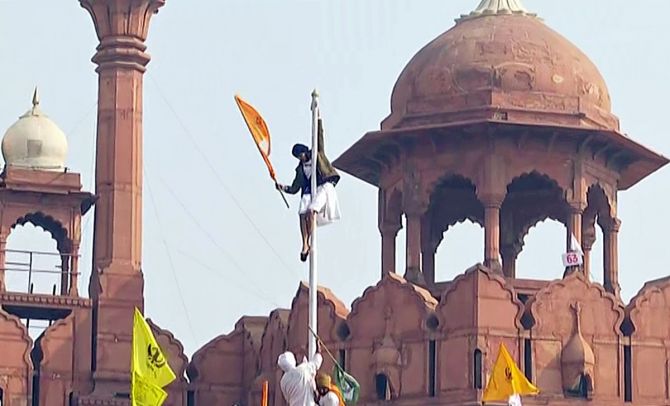 Protesting farmers hoist a flag from the ramparts of the Red Fort on 72nd Republic Day, in New Delhi. Photograph: ANI Photo 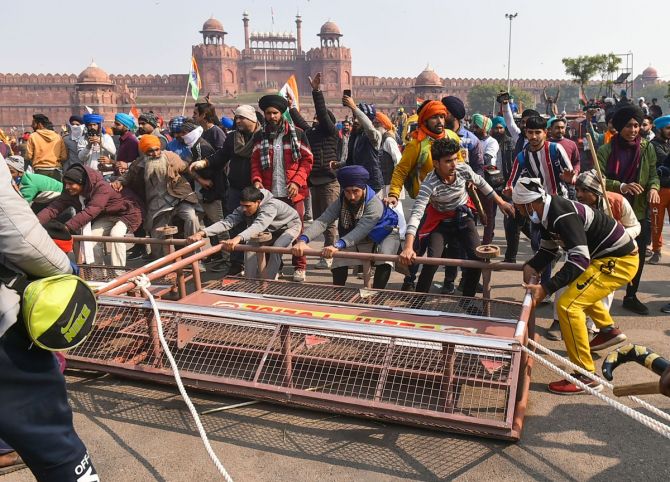