Everything can't be bought: Priyanka to BJP on Karnataka

Hours after the fall of the Congress-Janata Dal-Secular government in Karnataka, Congress general secretary Priyanka Gandhi Vadra tweeted that the Bharatiya Janata Party would discover one day that "everything cannot be bought". After multiple exits over the past two weeks, the HD Kumraswamy-led coalition lost a test of strength in the assembly, managing only 99 votes compared to the BJP's 105.

She wrote on the micro-blogging website, "One day the BJP will discover that everything cannot be bought, everyone cannot be bullied and every lie is eventually exposed.

"Until then I suppose, the citizens of our country will have to endure their unbridled corruption, the systematic dismantling of insitutions that protect the people’s interests and the weakening of a democracy that took decades of toil and sacrifice to build."

The BJP's BS Yeddyurappa is set to become Karnataka chief minister for the fourth time. Twenty lawmakers did not attend the floor test in the 225-member Karnataka assembly. Among them were 16 rebels who firmly refused to back down on their resignations.

The Congress has accused the BJP of carrying out "one of the most heinous" horse-trading the country has ever seen and said it will hold nationwide protests against the "immoral political destabilisation". 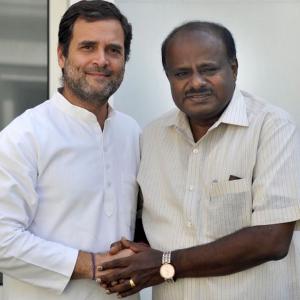