News
Business
Movies
Sports
Cricket
Get Ahead
Money Tips
Shopping
Sign in  |  Create a Rediffmail account
Rediff.com  » News » Even if it takes 100 months, will stand with farmers: Priyanka Gandhi

Even if it takes 100 months, will stand with farmers: Priyanka Gandhi

"Let alone 100 days, even if it takes 100 months I will stand in support of the farmers," Congress leader Priyanka Gandhi Vadra said on Sunday as she slammed the government over the three Central farm laws accusing it of "insulting" the tillers. 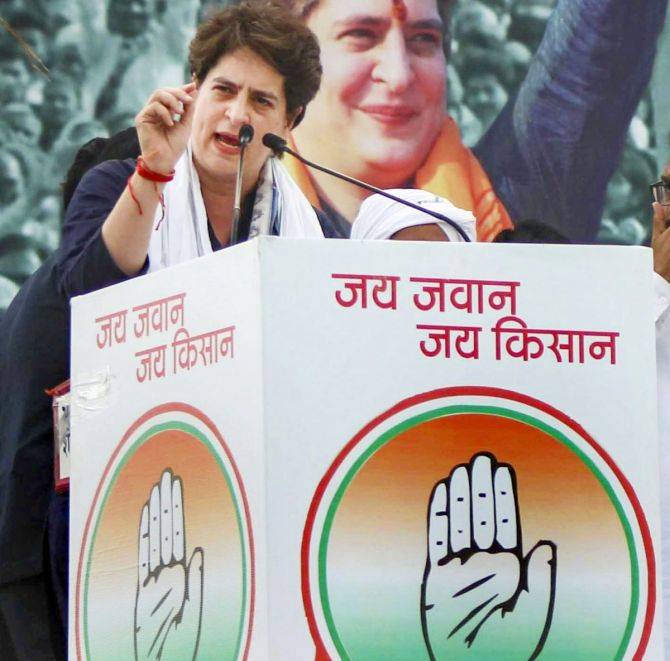 The Congress general secretary in-charge of Uttar Pradesh has been holding 'kisan panchayats' in western parts of the state recently and has been attacking the government over a range of issues from farm laws to rise in price of cooking gas, petrol and diesel.

"The farmers have been struggling for 100 days. More than 200 farmers have been martyred. It was the responsibility of the government to go to the farmers and talk to them," she said in a tweet in hindi and shared pictures of her addressing a large gathering at the 'kisan panchayat' in Meerut on Sunday.

"The BJP government made fun of the martyrdom of the farmers, insulted the farmers," she alleged.

Priyanka Gandhi urged people to stand with the farmers' struggle and to take the movement to the villages.

As the farmers' protest against the Centre's new farm laws completed 100 days, the Congress on Saturday had said the period was a "black chapter" in India's democracy for the treatment meted out to the protesters and also marked 100 days of the ruling BJP's "arrogance".

Farmers, mostly from Punjab, Haryana and western Uttar Pradesh, have been camping at several Delhi border points, including Tikri, Singhu and Ghazipur, since November 28, demanding a complete repeal of the three farm laws and a legal guarantee on the minimum support price (MSP) for their crops.

The government has denied allegations that it was trying to put an end to the MSP and the mandi system. Prime Minister Narendra Modi has also assured farmers that the MSP would continue.

Farmer leaders have already made it clear that they would not settle for anything less than the repeal of the farm laws.