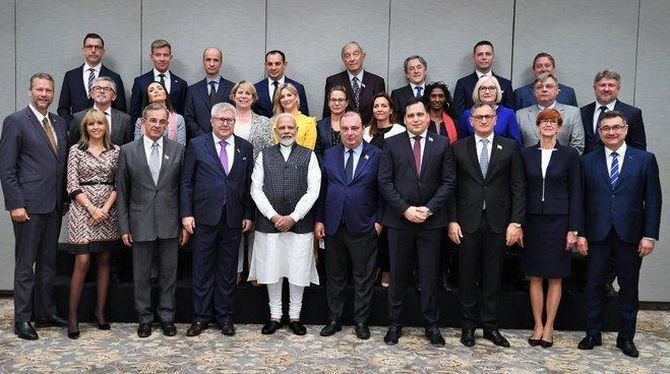 In the first visit by a foreign delegation to Kashmir after the abrogation of Article 370, a group of 27 European lawmakers will travel there on Tuesday, a major diplomatic outreach by the government to counter Pakistan's narrative on the situation in the valley and to give them a 'clear view' of India's development and governance priorities.

Ahead of their two-day Kashmir visit, these Members of European Parliamentarians (MEPs) also met Prime Minister Narendra Modi, who categorically told them that an urgent action was needed against those supporting and sponsoring terrorism and asserted that there should be zero tolerance for terrorism.

The visit will provide them with a better understanding of the cultural and religious diversity of the regions of Jammu, Kashmir and Ladakh, Modi said and hoped that it will also give them a 'clear view' of the development and governance priorities in the region, according to an official release.

National Security Advisor Ajit Doval on Monday briefed these MEPs on cross-border terrorism emanating from Pakistan, constitutional changes made in the status of Jammu and Kashmir with the revocation of Article 370 and the situation in the Valley.

After the briefing, Doval hosted a lunch for the European lawmakers.

owever, the initiative was strongly criticised by opposition parties with the Congress attacking the government, saying while it is allowing MEPs to visit J&K but preventing Indian leaders from doing so which was an insult to India's democracy and 'ultimate disrespect' to its sovereignty.

Former chief minister Mehbooba Mufti, who is in detention, tweeted, 'Hope they get a chance to speak to the people, local media, doctors and civil society members. The iron curtain between Kashmir & the world needs to be lifted and GOI must be held accountable for pushing J&K into turmoil' while questioning Centre's decision not to allow United States senators.

Criticising the outreach, Bharatiya Janata Party MP Subramanian Swamy tweeted, 'I am surprised that the MEA has arranged for European Union MPs, in their private capacity (not EU's official delegation), to visit Kashmir area of J&K. This is a perversion of our national policy. I urge the government cancel this visit because it is immoral.'

This is the first visit by a foreign delegation to the valley after the government abrogated Article 370 in August and comes barely weeks after the European Parliament plenary debate on the situation in Kashmir, during which High Representative/Vice-President expressed concern over the situation there.

"We remain concerned about the situation on the ground, with its restrictions on fundamental freedoms. It is crucial that freedom of movement and means of communication are fully restored as well as access to all essential services.

However, officials in New Delhi feel the visit will provide an opportunity to these lawmakers to 'see things for themselves' instead of falling prey to Pakistan's 'false narrative'.

As per sources, the delegation will meet J&K administration officials and locals in the valley. During the two-day visit, they are also likely to call on the Governor and interact with the media.

"It (abrogation of Article 370) is India's internal matter as Kashmir is its part. It is the prerogative of Indian government to take internal decisions. We are with India on this," Zdechovsky told PTI.

In his article in the European Parliament's monthly newspaper last month, Zdechovsky said the abrogation of Article 370 will help in rooting out several terrorist organisations operating in Kashmir.

"Following the article I received many hate mails from Pakistan," he said.

Advocating an approach of dialogue, Pollak said, "Both India and Pakistan should talk to avoid escalation in the region."

Another lawmaker said the briefing by Doval was very 'informative' and gave a perspective on the entire issue.

Congress spokesperson Anand Sharma said the party would raise issue in Parliament as, he added, the government decision violates the collective privileges of Indian MPs.

His party colleague Jairam Ramesh tweeted, 'When Indian political leaders have been prevented from meeting the people of J&K, what possessed the great chest-beating champion of nationalism to allow European politicians to visit J&K. This is an outright insult to India's own Parliament and our democracy.'

The visit is also expected to take some heat off the government, which is being criticised by some foreign leaders, including certain US lawmakers, for imposition of restrictions in the valley as well as not for allowing international organisations to travel there.

Last week, a US Congressional panel questioned state department officials on the situation in Kashmir with some lawmakers expressing concern over the situation.

As many as six US lawmakers -- David Cicilline, Dina Titus, Andy Levin, Susan Wild, Chrissy Houlahan, and James McGovern -- also wrote a letter to Indian Ambassador to the US Harsh Vardhan Shringla, claiming that the picture portrayed by India in the valley is different from the one being told to them by their constituents.

'We believe true transparency can only be achieved when journalists and members of Congress are allowed free access to the region. We encourage India to open Jammu and Kashmir to both domestic and foreign journalists, and other international visitors, in the interest of open media and increased communication,' they said in the letter.