'Collateral damage during operations needs to be avoided.'
'Such an objective can be achieved more easily should stone throwers not gear up to en masse oppose security forces.'
'With the conditions being quite sensitive at this stage, the death of one of these boys could easily serve the terrorists in instigating violence,' notes Brigadier S K Chatterji (retd).
Illustration: Dominic Xavier/Rediff.com 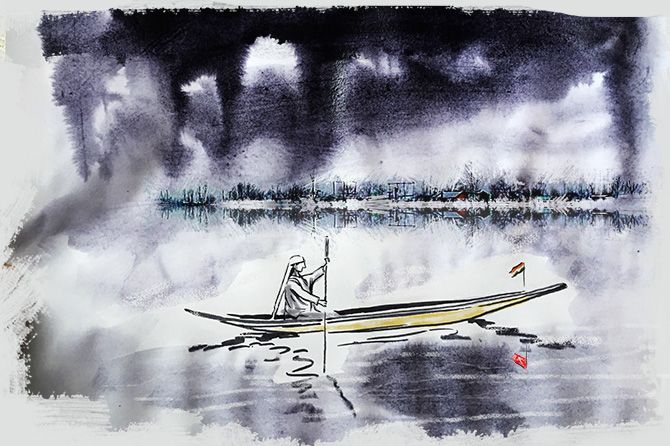 So far, the fallouts of revoking Article 370 have barely been violent in the Kashmir valley.

The additional 46,000 police personnel inducted to ensure peace as Jammu and Kashmir transited from being a state to a union territory is undoubtedly the predominant stabilising factor.

There is a requirement to assess how things have moved in the last month or so after the historical step was taken.

In the past one month not a single bullet has been fired in the valley.

There have been localised protests and demonstrations; these have been handled without applying force as may be termed as disproportionate.

All essential services have been maintained.

There are no reports of breakdown in power or water supply.

Most telephone exchanges and landlines were restored.

Schools are functional and government offices have opened since August 16, 2019.

Haj pilgrims are being facilitated.

The produce of Kashmiri orchards are being transported to their destinations.

Mobile phones are fully functional in Jammu and Ladakh.

In the valley, cellular connectivity is yet to be restored.

While it is possible to say that the stability being witnessed in the valley is primarily due to the additional security forces inducted, it is essential to understand certain basic aspects of handling insurgencies.

Either you have more boots on ground or you use heavier firepower is the axiomatic truth, globally.

Those additional forces provide the boots on ground that can keep fingers away from triggers on both sides: The security forces and the terrorists.

Let's take a look at the way our neighbouring nations have responded to insurgencies.

The Sri Lankans used the complete resources of the nation to eliminate the Liberation Tigers of Tamil Eelam.

Their tank tracks crushed the backbone of the LTTE.

All essential elements of its army, navy, air force and police forces were deployed to wipe out the LTTE.

The Pakistani methodology in the areas bordering Afghanistan is another story.

They have used their air power, followed by artillery. Finally, foot soldiers arrived on the scene, perhaps just to count the dead.

In their case, they did not want the terrorist groups to be eliminated in most cases, but only made subservient enough to follow the dictates of the Inter Services Intelligence agency.

In J&K, Indians have so far used only the rifle wielding foot soldier.

Using air power hasn't even occurred to Indian planners; artillery has been a taboo; only the rifle has been used with soldiers and policemen having to answer for every bullet fired.

That remains the reason for additional deployment of forces in J&K.

It also needs also be reiterated that J&K is not an insurgency. but a proxy war waged by Pakistan. Hence, the resources, funding, training and logistics of the insurgents, is both quantitatively and qualitatively superior.

There is a need to continue with the enhanced deployment of forces, to disallow the terrorists from coercing the population into displays of mass protests.

However, certain priority areas need to be addressed immediately.

Amongst the priority areas requiring focussed endeavours is the radicalisation of the younger generation.

There are enough preachers in the shrines who whip up passions that ultimately manifests on the streets.

Every religious shrine, irrespective of faith, needs to spread a message of tolerance in a multi-cultural and multi-religious society like ours.

It's a dictum applicable globally, irrespective of faiths, beliefs and practices.

Similarly, de-radicalisation of misguided youth needs to be pursued.

We have notched adequate success in de-radicalisation in the past.

Operations to neutralise terrorists must maintain their tempo.

Relentless operations to eliminate the leadership of these tanjims, need due prioritisation.

Simultaneously, the fence along the Line of Control requires upgradation.

The exercise is already on, however, it needs to be expedited.

Technology needs to be utilised to make the fence a more formidable deterrent.

The fact that a hugely lethal car bomb could be put-together and used against a CRPF convoy to cause 40 deaths throws up a lot of questions regarding the efficacy of our intelligence grid in the valley.

Surely, the vehicle was not loaded with explosives and driven across the LoC.

It was prepared for the task in the valley.

The explosives also were sourced somewhere!

Insurgency operations, if they have to be surgical, need to be intelligence based.

At Pulwama, we failed on multiple fronts and paid for it with 40 lives.

Terrorist financing and money laundering needs to be curbed.

The National Investigation Agency has already framed charge sheets against a few separatist leaders, their relatives and partners.

Nothing in J&K moves without money; not even a stone-thrower.

The over ground workers provide assistance to the terrorist groups because they get paid.

To choke fund flows is an absolute mandate.

The rampant corruption in government offices has to be tackled.

J&K has received 10 per cent of all central grants given to states during the period 2000 to 2016, with only one per cent of the Indian population.

However, the seepage of funds has been proportionate to the receipts.

Since the time of the Modi government coming to power, there has been a steep decline in major scams at Delhi.

Thus, a model is available with the government to replicate in the valley.

It will be futile to pour funds without ensuring these are actually spent on the projects that they are meant for.

Collateral damage during operations needs to be avoided, especially at this stage.

Such an objective can be achieved more easily should stone throwers not gear up to en masse oppose security forces.

With the conditions being quite sensitive at this stage, the death of one of these boys could easily serve the terrorists in instigating violence.

Kashmir requires capital inflows to diversify its economy beyond tourism.

The Mukesh Ambani-led Reliance Group has expressed willingness to invest in J&K.

The Trident group has promised to invest Rs 1,000 crores.

Similarly, a large number of business houses have expressed interest in investment in both Kashmir and Ladakh.

However, to be prudent, major investments will be possible only when J&K holds out the promise of stability in the long run.

Given a job, young people would want to lead a normal life.

The early materialisation of private sector investments, building on J&K's potential as a tourist destination, filling up vacancies in government departments, greater recruitment in the armed forces and police organisations, financial support to small scale industries and the like are required for the long ride to normalcy.

In J&K we have witnessed repeated ups and downs.

We used our security forces to get the situation to near normalcy repeatedly, only for the opportunity to be squandered by our politicians.

We are at a different crossroad today.

The politicians have a far bigger role to play.

It's time our politicians keep our territorial integrity in mind when they get to the streets to woo their constituencies.

A beginning perhaps has been made.

The representatives welcomed the government's initiatives revoking provisions of Article 370 and 35A.

A substantial percentage of residents of J&K harbour hopes of their children getting better education, acquiring skill sets and stepping into professional careers that promise growth.

However, many political bigwigs and often encountered panellists of New Delhi's televised debates, have displayed poor discretion so far.