The United States is not taking at face value Pakistan's actions against terrorists outfits, including the arrest of Mumbai attack mastermind Hafiz Saeed, and will ensure that these steps are made "irreversible and sustainable" and not just "window dressing", the White House has said ahead of Prime Minister Imran Khan's first meeting with President Donald Trump. 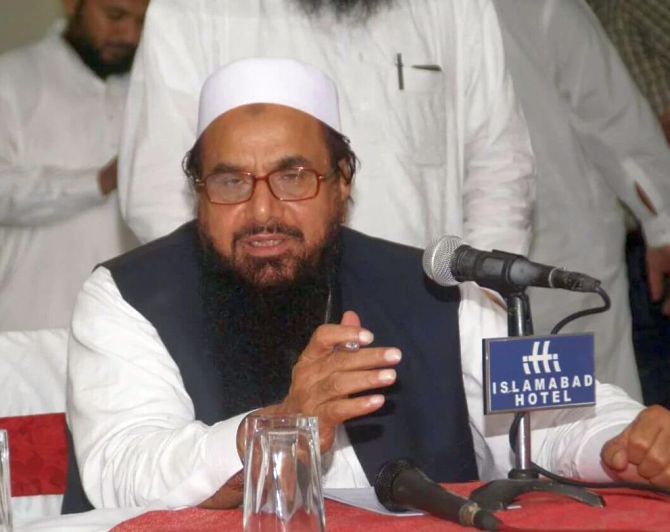 A senior Trump administration official explained that by extending the invitation to Prime Minister Khan to visit the White House, the US wants to send a message to Pakistan that the "door is open to repairing relations" and building an enduring partnership if Islamabad "changes its policies" with regard to terrorists and militants.

Relations between Pakistan and the US have been turbulent since Trump took office in 2017, with the president repeatedly singling out Islamabad for failing to rein in extremists and being an unfaithful partner in the fight against terrorism.

Khan, the 66-year-old cricketer-turned politician, is scheduled to meet Trump at his Oval Office on Monday, the first by a Pakistani leader in nearly four years, the last one being that of Nawaz Sharif in October 2015.

The Trump administration is preparing to give him a warm welcome which includes a traditional welcome at the White House, one-on-one meeting at the Oval Office and a working luncheon in the presence of several of the president's Cabinet colleagues and leaders from the Pentagon.

The senior administration official ruled out lifting suspension of security aid to Pakistan unless it sees sustained, decisive and irreversible action against terrorist and militant groups.

"As you know, we suspended security assistance to Pakistan in January 2018. And as of now, there's no change to that policy," the official said in response to a question.

"By and large that security assistance is still suspended. We will consider changing that suspension on certain items if Pakistan meets our security concerns both in Afghanistan, and with regard to some of the externally focus groups like Lashkar-e-Taiba and Jaish-e-Mohammed. But as of now, there was no change to that suspension and security systems," the official, requesting anonymity, said.

Given the history of Pakistani cooperation with these unhelpful groups, the US is "not under any illusion". The initial steps that have been taken thus far, the administration is not taking them at face value, the official said.

"We are monitoring the situation. We will wait and see if the steps are made irreversible and sustainable," the official said, adding that the Trump administration has "not made a final evaluation" on whether that's the case.

"We've seen this happen in the past. And we have been looking for sustained and concrete steps, not just window dressing," the official said when asked about the arrest of Jamaat-ud-Dawa chief Hafiz Saeed.

Saeed, a UN-designated terrorist was arrested on Wednesday -- the seventh time since December 2001, when he was nabbed in the immediate aftermath of the terrorist attack on the Indian Parliament.

"Let me reassure you, we are clear eyed about the history here. We're under no illusions about the support that we could see from Pakistan's military intelligence services to these groups. So we will look for concrete action," the official said when asked about the actions that Pakistan has taken against terrorist group and if the US believes in them.

"I noticed that Pakistan has taken some initial steps such as pledging to seize assets of some of these terrorist groups. And, of course, they put under arrest Hafiz Muhammed Saeed, the leader of Lashkar-e-Taiba which is responsible for the 2008 Mumbai terrorist attacks," said the official.

But the official quickly noted that this was the seventh time that Saeed was arrested since 2001.

"That is why we are very clear eyed and realistic when you see him arrested as he has been arrested and released in the past. So we would like to see that Pakistan takes sustained action in actually prosecuting these people," the official said.

Saeed-led JuD is believed to be the front organisation for the Lashkar-e-Taiba which is responsible for carrying out the 2008 Mumbai attacks that killed 166 people, including several American nationals.

"Quite frankly, the previous arrest of Hafiz Muhammed Saeed hasn't made a difference and the LeT has been has been able to operate. So we're monitoring the situation," said the senior administration official as reporters asked questions on the links between Pakistani intelligence services and terrorist groups.

The US "remains concerned" about terrorist groups that continue to operate in Pakistan, such as Jaish-e-Mohammed, Lashkar-e-Taiba, and the Haqqani network.

"We do have concerns about link between these groups and Pakistan intelligence services in military. That's no secret," the official said.

The official said the purpose of Khan's visit is also to press for concrete cooperation from Pakistan to advance the Afghanistan peace process.

From the US perspective, the President will be most interested in encouraging Pakistan to assist in the Afghanistan peace process.

"We're hoping that the discussions are productive," the official said.

Prime Minister Khan's visit is an opportunity to incentivise Pakistan to use the full leverage and influence on the Taliban to advance the peace process in war-torn Afghanistan.

"We are calling on Pakistan for assistance in moving the peace process forward," the official said.