Congress on Monday accused Gujarat Chief Minister Narendra Modi of dragging the name of Ahmed Patel into the campaign for the Gujarat assembly polls because he "wanted to play the communal card".

Modi has said during his campaign that Congress wants to make Ahmed Patel, the political secretary to Congress chief Sonia Gandhi, the chief minister of the state.

"They never had the issue of development in 2002 and 2007 (elections). Everyone knows what issues they fought on. In 2012, they do not have any issue which can divide the society or stoke passions. So now history repeats itself in 2012 -- they are trying to rake up Ahmed Mian Patel (issue)," Congress poll committee chairman Shankersingh Vaghela said.

As Patel is a Muslim from Gujarat, Modi was trying to polarise voters using his name, Vaghela said.

"This is disgraceful," he said.

"The political secretary to Congress president, who suggests names of several chief ministers in other states, holds a high office. Will he ever be interested in Gujarat," Vaghela said, alleging that Modi's remarks came from his "mental perversion".

"During its misrule of 17 years, BJP has (often) made hollow promises. It has lost the moral right to seek votes," Vaghela said.

"It has not even fulfilled five per cent of the promises made in the manifestos of the past three assembly elections," he said.

"Women and children do not feel safe in this (BJP) rule. The public is seeking accountability now," the Congress leader said.

Vaghela also said that the Modi government was "neck-deep in corruption".

"Modi has two faces, one in 3D mask and another in reality," Vaghela said, taking a dig at the 3D telecast of Modi's campaign speeches.

Congress also released a booklet, titled 'Why the BJP government should not continue in Gandhinagar', which is a 17-point 'chargesheet' highlighting the party's "failures" on various fronts like law and order, affordable housing, health, etc.
The booklet is compiled from answers to questions asked in the assembly and information sought under the Right to Information Act.

"A virtual picture of Gujarat is being shown to the entire country. In reality, Modi fears going amidst the public and that's why he is addressing gatherings through 3D sessions," state Congress chief Arjun Modhwadia said on this occasion. 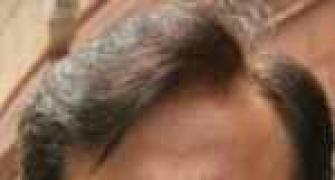 Ahmed Patel's response to Modi: I never aspired to be CM 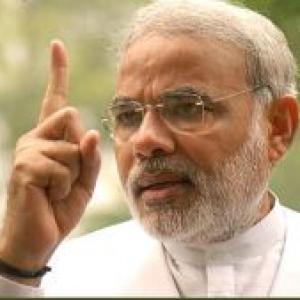 Cong has failed in Guj as opposition, says Modi

Kejriwal holds rally at Roha; hits out at Maha govt