Residents of northeast Delhi felt hardship to run daily errands as they reported running out of food, milk, medicines and other essential items.

With medical shops, grocery stores and other establishments selling essential items downing shutters, people in the region are waging a grim battle for survival.

The locals in Brijpuri and Gokalpuri areas of northeast Delhi said they did not get milk for three days.

Ankit Tyagi, a resident of Brijpuri, said he and his family survived on bread and Maggi on Monday and Tuesday.

"There was no traffic movement in our area due to which we did not get milk on these two days, which has made the situation difficult for children. We survived on bread and Maggi," he said.

Though the situation in the area is under control, people are still worried for their safety.

"The children are not going to schools and police are claiming that the situation is under control, but it is not. We cannot sleep in the night. This is for the first time we are facing this kind of a situation here," Yogesh Thakur, another resident, said.

Shops and pharmacies remained closed in the interior pockets of areas like Maujpur, Jafrabad and Yamuna Vihar, while pieces of bricks, glass shards and other remnants of the riots were cleared off the main roads.

Some stray incidents of violence and arson were reported from Yamuna Vihar, near Bhajanpura and Maujpur, with locals saying a car was partially burnt around 4 am on Thursday by three to four miscreants in B Block.

"One of the miscreants was holding a bucket in his hand. They started pouring some liquid on three vehicles. One of the vehicles caught fire. We raised an alarm after which they fled away," a local told PTI, saying groups of people in the neighbourhood are staying up all night to keep a watch on the miscreants.

Another local said he had gone to Karkardooma court for a hearing in a case and procured food supplies and medicines from there while returning home.

"Shops and pharmacies in my area remained closed today also. I am a diabetes patient and had run out of medicines because of the violent situation here. I had my medicine today after three days," Faisal said.

The death toll in the city's worst riots climbed to 38 on Thursday as the violence ebbed, but did not subside completely and thousands of people began picking up the pieces of their shattered lives and livelihoods. 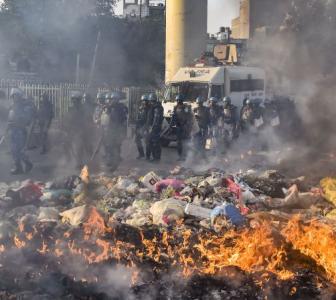