Kanhaiya Kumar described the chargesheet as "politically motivated" and questioned its timing. 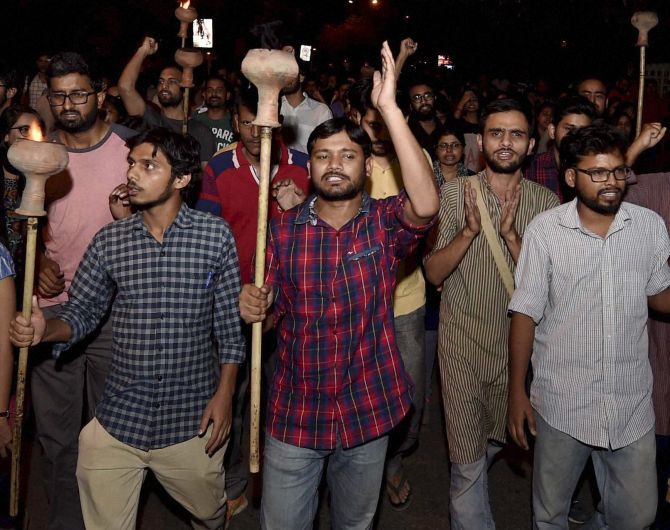 Nearly three years after former Jawaharlal Nehru University student leader Kanhaiya Kumar and 9 others were accused of raising anti-India slogans, the Delhi police on Monday charged them with sedition.

Kumar described the chargesheet as "politically motivated" and questioned its timing, just months ahead of the Lok Sabha polls.

It will be left to the CMM whether or not to take cognisance of the chargesheet in what is known as the JNU sedition case.

The maximum punishment for sedition is life term.

The police claimed it has video clips to prove the offence which has been corroborated by the statements of the witnesses and that Kumar was leading a procession and allegedly supported seditious slogans raised on the JNU campus in February 2016.

Kumar, who faced allegations that he had incited the mob to shout anti-India slogans, said the chargesheet was a "diversionary ploy by the Modi government to hide its all-round failures".

"The chargesheet is politically motivated. However, we want the charges to be framed and a speedy trial in the case so that the truth comes out. We also want to see the videos that have been placed on record as evidence by the police," he said.

The accused were named in the chargesheet for allegedly shouting anti-India slogans during an event on the university's campus on February 9, 2016, to commemorate the hanging of Parliament-attack mastermind Afzal Guru.

The other seven accused chargesheeted in the case are Kashmiri students Aquib Hussain, Mujeeb Hussain, Muneeb Hussain, Umar Gul, Rayeea Rassol, Bashir Bhat and Basharat, some of them were then studying in the JNU, the Aligarh Muslim University and the Jamia Millia Islamia.

As many as 36 others, including Communist Party of India leader D Raja's daughter Aprajita, Shehla Rashid (then vice-JNUSU president), Rama Naga, Ashutosh Kumar and Banojyotsna Lahiri, all former students of the JNU, have been named in column 12 of the chargesheet due to insufficient evidence against them, police sources said.

The 10 accused have been chargesheeted on the basis of electronic evidence, including CCTV footage and mobile footage, and documentary evidence, which include statements of students and security guards.

In the chargesheet, police claimed that all the footage were genuine and the presence of students belonging to Kashmir was also established through mobile clips and videos.

It claimed that the Kashmiri students had masks on during the procession, but did not cover their faces while returning. This showed their involvement, police said.

The final report by the police claimed that no permission was granted to organise the event and every member was a part of an unlawful assembly.

When informed about the lack of permission to hold the event, the accused persons started arguing and fighting, it said.

A case was registered on February 11, 2016 under sections 124A and 120B of the IPC against unidentified persons at the Vasant Kunj (North) police station, following complaints from Bharatiya Janata Party MP Maheish Girri and the Akhil Bharatiya Vidyarthi Parishad, the student wing of the Rashtriya Swayamsevak Sangh.

The event in 2016 had taken place despite the university administration cancelling the permission, following a complaint from the ABVP, which had termed it as "anti-national".

"I have not received any summons or information from the court. But if it is true, then we are thankful to the police and Modi that finally after three years, when it is time is for him and his government to go, the chargesheet has been filed. But what is pertinent is the timing of the chargesheet--just ahead of the Lok Sabha polls. It is evident that there is a political motive behind this. The motive is that the Modi government has been a failure in all aspects, it has not been able to fulfil even a single promise, so it is playing all its cards to divert the attention," Kumar later told reporters.

He said the Modi government, just as all its other promises, was "not serious" and using the issue now as a political tool.

Khalid, who addressed a student gathering at St. Joseph's College in Bengaluru on the "role of youth in safeguarding the Constitution", said, "We reject the allegations. The move to file the chargesheet three years after the alleged incident is an attempt to divert the attention (of the people) right before (parliamentary) elections. We will fight it out in court."

"We congratulate the Delhi Police, the home ministry and the government for waking up from their deep slumber three years after 9 Feb 2016, and barely three months before the general elections 2019 and filing a chargesheet against us," Khalid and Bhattacharya said in a joint statement.

Following is the chronology of events of the sedition case in which the Delhi police Monday filed a chargesheet against former JNUSU president Kanhaiya Kumar and others:

Feb 10: JNU administration orders a "disciplinary" inquiry into the event.

Feb 17: Another scuffle in Patiala House Court as men dressed in lawyers' robes allegedly beat up scribes and students ahead of hearing in Kanhaiya's case.

Jan 14, 2019: Police files chargesheet against Kanhaiya, Umar and Anirban and others under offences of sedition, rioting, criminal conspiracy. 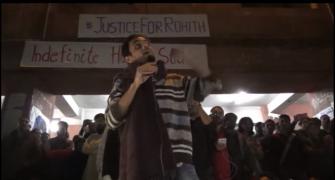 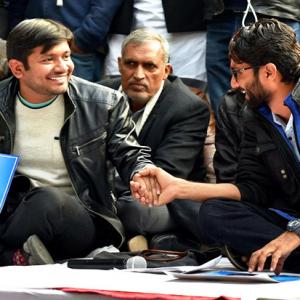