The outcome of the fifth round of sero-prevalence survey in the national capital has indicated that Delhi population could be heading towards attaining herd immunity against coronavirus infection, sources said on Monday. The survey has found that in one district, 50-60 per cent of the sampled population has developed antibodies to COVID-19, they said.

For the survey, which ended a few days ago, samples of over 25,000 people from various districts across the city were collected, the sources said.

Delhi's population is over two crore, spread across 11 districts.

"In one district, the sero-prevalence rate is between 50-60 per cent, indicating a large number of people have developed antibodies, so we can say the city is moving towards attaining herd immunity," a source said without disclosing the name of the district.

Experts say herd immunity is said to have been developed in a population segment if 50-60 per cent of those are found to have the presence of antibodies in a sero-prevalence survey.

Herd immunity implies that in any set of people in a community, after becoming affected by the virus, a lot many of them become immune to it, on account of antibodies developed in response to it. And, hence, such people become a protective layer between the infected person and unaffected people, thereby breaking the chain of viral transmission.

This is the fifth such exercise that was conducted here, but the Delhi government has not given any official version on it.

The first sero-prevalence, done from June 27-July 10 by the Delhi government in association with the National Centre for Disease Control, had used 21,387 samples and found that around 23 per cent of the people surveyed had an exposure to the novel coronavirus.

The exercise in August showed 29.1 per cent people had antibodies. Also, 79 of 257 people who had tested COVID-19 positive and then recovered, and were part of the sero-prevalence survey done in the first week of August, however, did not have the antibodies against the virus, according to a report released later.

In the survey in September and October, the figures stood at 25.1 per cent and 25.5 per cent in October.

The exercises were undertaken for a comprehensive assessment of the COVID-19 situation in Delhi and to formulate strategies based on its findings.

Health Minister Satyendar Jain recently said the pandemic situation in the city is now under control.

Delhi recorded 148 fresh COVID-19 cases on Monday, the lowest in nine months, even as the positivity rate stood at 0.31 per cent.

This is also the the fourth time, the number of daily cases has stood below the 200-mark in January.

The infection tally in the city rose to 6.34 lakh and the death toll mounted to 10,813 with five new fatalities, authorities said on Monday. 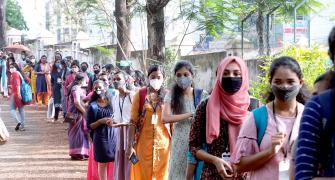