Dalit who was beaten, forced to drink urine dies Activists of some Dalit outfits, social organisations and the Bahujan Samaj Party sat on a protest in Sangrur district of Punjab on Sunday, a day after a 37-year-old Dalit man died after being mercilessly thrashed and forced to drink urine earlier this month.

The protesters, who blocked the Lehra-Sunam road, demanded that the next of kin of the deceased be given a government job and his family be provided a compensation of Rs 50 lakh.

"The family should be given justice. The perpetrators of the crime should be hanged. The Punjab government should give a job to the victim's wife and Rs 50 lakh compensation should be given to the family," a protester said.

The Aam Aadmi Party's Sunam MLA Aman Arora, who also visited the protest site, said the family should get justice and their demands should be met by the government.

Four people have already been arrested in connection with the crime.

The victim's kin have refused to allow post mortem and to take the body until a government job is given to his widow and the family gets Rs 50 lakh compensation. The family also demanded that those responsible for the crime be given exemplary punishment.

The dalit man is survived by his wife and three children, including two daughters.

His widow told reporters that they have not been approached by any government agency yet.

"Our demand is that exemplary punishment should be given to the accused. The government should give us written assurance that they will give me a job and a compensation of Rs 50 lakh to the family," the victim's wife said.

Expressing grief over the death, Punjab Minister and Sangrur MLA Vijay Inder Singla said, "Whatever has happened is unfortunate. We stand with the family. The accused should get exemplary punishment."

Leader of Opposition in Punjab Assembly and AAP legislator Harpal Singh Cheema said the family should be given adequate compensation 'and they should get police security'.

AAP's Sangrur MP, Bhagwant Mann said that in a civilised society such incidents were shameful and demanded those responsible for the crime be given strict punishment.

On October 21, the victim, who was a resident of Changaliwala village, got into an altercation with one Rinku and some other persons over some issue.

The matter was resolved with the intervention of villagers, the police said.

The victim had told police that on November 7, Rinku had called him to his house where the two talked about the issue.

He had alleged that he was then thrashed by four persons with a stick and an iron rod after being tied to a pillar and was forced to drink urine when he asked for water.

After the incident, the opposition parties have attacked the Congress government over the "barbaric treatment" being meted out to Dalits in the state.

The Shiromani Akali Dal and the Bharatiya Janata Party said a 'rule of jungle' was prevalent in the state.

State Congress chief Sunil Jakhar said strict punishment would be given to those involved in this incident while the Punjab State Scheduled Castes Commission has also sought a report from the Sangrur SP over the incident.

The commission's chairperson, Tejinder Kaur, had on Friday said the rights body had learnt about the incident through media reports and it had taken suo motu cognisance of the matter. 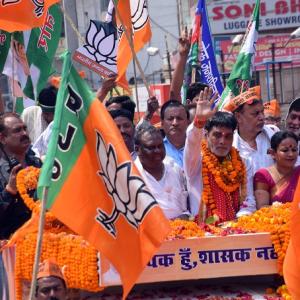