'The government says it will file a review petition against the Supreme Court, but there is no conviction here.'
'It is doing this purely because it is worried.'
'It comes from the same sentiment as asking BJP MPs to spend two nights in a Dalit village,' says Aakar Patel. 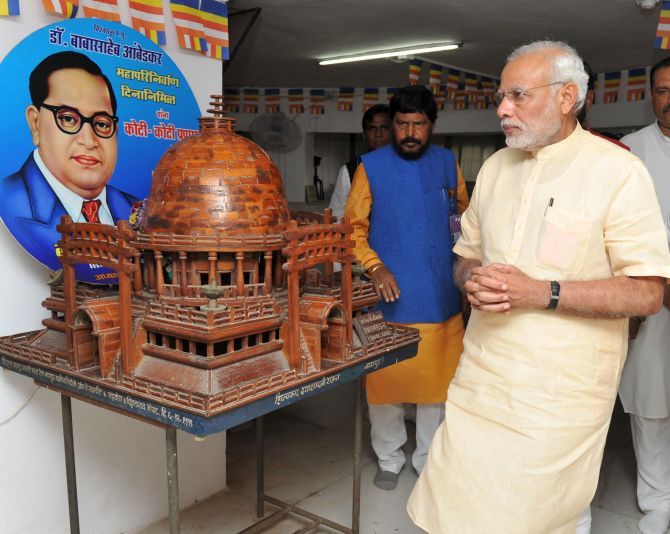 The prime minister has encouraged Bharatiya Janata Party MPs to reach out to Dalits. He wants this done by each MP spending two nights around April 14, which is Ambedkar's birth anniversary, in Dalit-dominated villages.

Narendra D Modi has urged the BJP MPs to remind Dalits that the BJP was the party that took measures to honour Ambedkar.

The reason Modi is nudging them is because of recent events where Dalits have taken to the streets against the government.

They believe it is the creeping Hindutva of the last three years that has led to the Supreme Court removing a protection they had under a special law.

The prime minister wants to assure them that the BJP has their best interests at heart, and therefore he is asking the MPs to symbolically spend time with them.

Let us look at it from the BJP's point of view as problem-solvers and well-wishers.

The party's aim is to unify all Hindus politically and culturally. This is its ideology and it actually believes in doing this.

How can it go about this?

It is not easy to come to an exact number of 'Hindus' because Sikhs and Jains (and now perhaps Lingayats) do not see themselves as Hindus. But let us include all of them anyway and assume that is around 85% of our population that needs to be united.

It is easier to unify the 85% against the other 15% and that is what usually happens on the subcontinent.

Minorities in all South Asian nations get bullied by the unified majority. All minorities -- whether in Pakistan, Bangladesh, India or Sri Lanka -- have poor representation in legislatures, the government, the police, the armed forces and even private sector jobs and have the usual problems of finding homes and being treated as the enemy.

But we are not talking about that today. Let us look at the problems of unifying this 85% when there are internal divisions, as the Dalit agitation has thrown up.

The reality is that it is not easy to claim unity, even on essential things like language and food and music.

Lata Mangeshkar is easily seen as a pan India figure though M S Subbulakshmi is not.

Bollywood and cricket do not interest the north east.

What happens when we have a problem among ourselves?

Hindutva wants to include all Hindus, but this inclusion happens on Hindutva's terms.

For example, 'Hindu' means non-beef eating, preferably vegetarian. The prime minister comes from a community of Gujaratis that are meat eating, but he has chosen to give up that culture and become more RSS-like (meaning more Brahminical).

This has made him acceptable.

Had he been a beef-eating Adivasi, it would not have been easy for the RSS to make him chief minister of Gujarat.

Except for Singh, who was a Thakur, the others are all Brahmins.

No Dalit has ever been RSS head.

The other problem of unifying all Hindus is that there is a natural constituency for the BJP, and that is the Hindu upper caste.

This core constituency is fundamentally opposed to Dalit rights. They might not see it in those terms, but if we break it down it becomes obvious.

Does the upper caste support reservations? The answer is no, because reservations to Dalits and Adivasis come at the expense of this group.

This is a division that is so fundamental that it cannot be papered over in the name of Hindu unity.

There is not a single Dalit or Adivasi member of Parliament even inside the BJP that will support the taking away of reservations.

The exact same problem is at the root of the Scheduled Caste and Scheduled Tribes (Prevention of Atrocities) Act.

The Supreme Court has bravely gone in and sent down a judgment that the Dalits and Adivasis have revolted against.

These two communities see this law as being a safeguard against their ritual humiliation by the upper caste Hindu.

It is true that this law is followed very poorly and it is difficult to get the police to even register an offence under this law.

But even so, on paper it was a safeguard for these two vulnerable groups which two judges have weakened.

On this issue also, the divide is down the line. How many people in the upper castes will oppose the court decision?

Not many, because it is the upper caste that is the receiving end of justice under this law. It empowers Dalits and Adivasis and this is unacceptable for many of us.

In such a situation, 'sabka saath' is not possible.

The weak can only progress if the strong make concessions. But this is not happening.

Observe the number of times the BJP is on the defensive because the RSS chief or someone else will make an anti-reservation comment.

The government says it will file a review petition against the Supreme Court, but there is no conviction here.

It is doing this purely because it is worried. It comes from the same sentiment as asking MPs to spend two nights in a village.

Last week I was at an event organised by various groups that want the Supreme Court judgment on the SC/ST POA Act reversed. One of the speakers was D Raja, the Communist Party MP.

Referring to Modi's comment on the BJP being the party that had honoured Ambedkar, Raja said: 'Ambedkar does not need any honouring. What are you doing for Dalits?'

That is actually hitting the nail on the head.

If the government actually sides with the Dalits, they are smart enough to know this. Spending two nights in a village will not be needed. 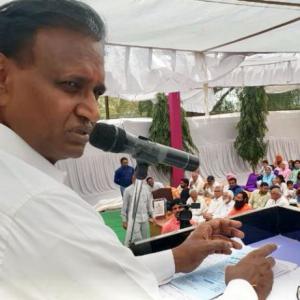