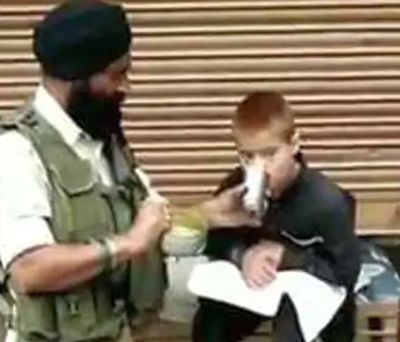 A Central Reserve Police Force jawan, who was part of the convoy that was targeted in the Pulwama attack, has been applauded for sharing his meal with a boy who appeared to be distressed.

A video of Head Constable Iqbal Singh feeding the boy has gone viral on social media and has won plaudits for the security forces operating in Kashmir.

The Sikh jawan was having his lunch in Nawakadal area of Srinagar on Monday when he saw a boy, wearing a black dress, sitting in front of a closed shop and signalling him for food, a senior official said.

Singh walked towards the boy and offered his lunchbox to the child, only to find that his hands were stricken with "paralysis", the official said.

The jawan, a driver of the 49th battalion, then put a sheet on the boy's lap and fed him lunch. He then wiped the child's face and offered water to drink, the official added.

The CRPF took cognisance of the incident and has decided to decorate the jawan with the director general commendation disc and certificate -- the highest service award of the paramilitary -- for showing "exemplary human gesture in spirit of the values enshrined in the charter of the force".

"The CRPF is always ready to help the people of Kashmir in times of distress. This is what I also did," Singh said in a recorded video message provided by the CRPF.

Singh was driving one of the 78 vehicles on February 14 when the fifth in their convoy was hit by a suicide attack killing 40 troops. The driver was part of the first team that helped in the rescue operation, the official said.

The Jammu and Kashmir Police posted the video clip on its Twitter handle with a caption: "We care".

The force has about 67,000 troops in the Kashmir Valley as part of 65 battalions that are deployed for undertaking counter-terrorism and law-and-order duties.