'This generation has seen no communication.'
'You have not given them any stake.'
'They don't have a feeling of belonging.'
'They have only seen a man in uniform with a gun.'
'That is why it is taking a more vicious form today -- the attacks on the security forces and the retaliation is causing heavy loss of lives.' 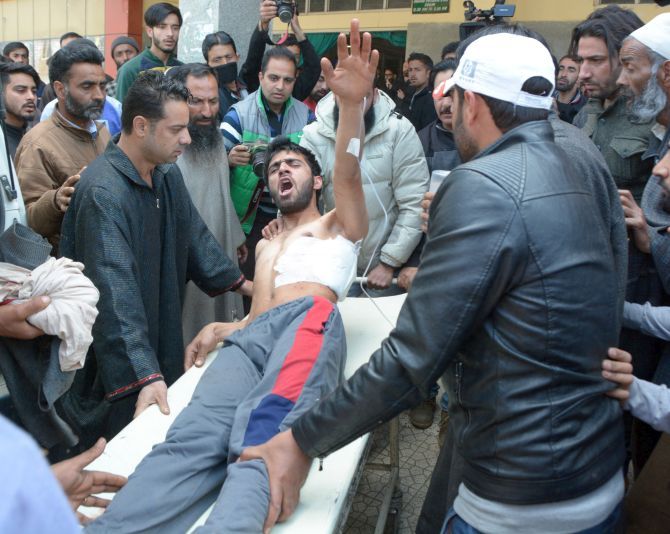 IMAGE: A youth injured in the April 9 violence shouts slogans as he is taken to hospital in Srinagar. Photographs: Umar Ganie

Even though the situation in the Kashmir valley has deteriorated after Hizbul Mujahideen terrorist Burhan Wani died in a shootout with the security forces last July, the anarchy that prevailed in Srinagar on Sunday, April 9, during polling in a Lok Sabha by-election rattled even the most optimistic of Kashmir-watchers.

The Election Commission recorded polling between 6.14% and 7% -- the lowest in the valley in almost 30 years. Several young people were killed when the security forces opened fire at mobs hurling stones at them.

On Monday, April 10, the Election Commission decided it was inadvisable to conduct the Lok Sabha by-election in Anantnag, south Kashmir, on April 12 and postponed polling to May 25.

Rediff.com's Archana Masih spoke to Mohammad Sayeed Malik, the distinguished commentator on Kashmir for more than half a century, to find out what the central and state governments can do to end unrest in the valley.

Kashmir has never seen such a dismal and tumultuous election, even during the height of militancy. Is this the point of no return in Kashmir?

I won't use the term 'no return.' This is nothing new. This situation has been developing from 1953 (when Jawaharlal Nehru's government dismissed Sheikh Abdullah's government in Jammu and Kashmir) onwards.

If it was a point of no return, it would have been right from 1953 when Sheikh Abdullah was dismissed from power undemocratically.

He was the elected, most popular, leader of Kashmir, acknowledged nationally and internationally.

There has been an estrangement and alienation at the people's level.

The integration (of Kashmir with the Indian Union) is technically and legally complete, but it is not so emotionally.

The closer the technical integration, the farther it has been on the emotional front.

The impression here -- which is substantially correct -- is that we are being disempowered, but the State is empowering itself for the sake of integration.

Integration is seen in a different shade here than there (in New Delhi).

How is it seen differently?

One, the state's powers that were given were an act of faith. That's why Kashmir has a special constitution, a different flag.

This was so because there was something different to it.

That difference that was mutually agreed upon and respected now appears to be an eye-sore when looked at by Delhi.

The root cause is that -- and everything stems from that.

It also gives space and leeway to Pakistan to step in.

Otherwise if Pakistan had any hold in the minds of the Kashmiris, they (Pakistan) were here in 1947, they (the Kashmiris) only had to embrace them.

They (the Kashmiris) resisted and delayed their response till the Indian troops responded.

That sentiment was not responded to properly (by Delhi). Today also, the same thing is happening.

The PDP-BJP government in the state has not been able to give the sense that it is in control.

The PDP-BJP government has been in power for three years. It has a very 'ugly' image in Kashmir.

Its elected representative (the late chief minister) Mufti Mohammad Sayeed said that if they ( the PDP) don't take the BJP along, they would be alienating the other two regions of Jammu and Ladakh, where the BJP had won the popular vote (in the assembly election).

In the interest of regional integration, they ( the PDP) joined in and it wasn't a very happy bargain when seen from Kashmir.

The basis of the alliance was the agenda of the PDP-BJP which accommodates to a large extent the aspirations of the Kashmiris.

It accommodates demands, old grievances were addressed -- it would not take Kashmir away from India, it would not breed secessionism -- all this was agreed upon by both sides, but not an inch of progress has been made on the 'agenda of the alliance'.

Why is there such resentment among Kashmiris?

There is a limit to testing the people's patience.

They thought Delhi does not mean to honour it (the agenda of alliance), they just have put it on paper, so it is beginning to tell upon in different ways.

This alienation is costing both the nation and the state, particularly Kashmiris. Everything has become a big liability today.

It will increase liability, alienation, estrangement and that naturally leaves place for Pakistan to exploit the situation clandestinely, or through infiltration or subversion.

There is a misconception in Delhi that Kashmir is a security and military problem. It certainly is not.

If it was so, it would have been settled long back.

If it was an economic problem, it would have been settled with packages of thousands of crores which doesn't mean much here. 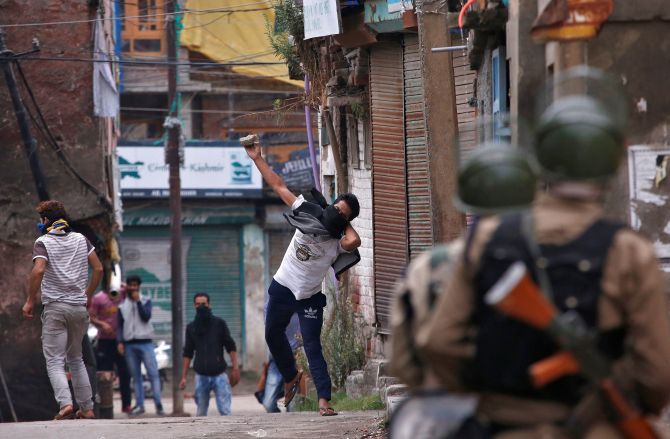 IMAGE: Kashmiri youth pelt stones at the security forces in Srinagar in September 2016.

Why did this by-election have the lowest voter turnout and this level of violence?

There has been violence, but not intense. But you should not be surprised.

After Burhan Wani's killing a new facet of Kashmir anger has come to the fore. This violence is part of that.

Now the face of the violence is the youth of Kashmir.

Earlier generations -- in their 30s, 40s, 50s -- would travel to India, had seen the dialogue process take place.

This generation has seen no communication. You have not given them any stake. They don't have a feeling of belonging.

They have only seen a man in uniform with a gun.

That is why it is taking a more vicious form today -- the attacks on the security forces and the retaliation is causing heavy loss of lives.

Who is behind these stone pelters?

There is no 'behind'.

When you let a fire burn, anyone can put in pieces of wood.

But you have allowed the fire to grow.

You don't address the accumulated grievances, fulfill promises that were the agenda of the government.

Then you alienate people who had hoped for some give and take.

How can they be brought back into the mainstream?

The 'agenda of alliance', which is a commitment, a common minimum programme, you should implement that. But not an inch has been proceeded upon.

Political or military measures are not going to sort out this problem.

Pakistan has always been there creating mischief and this provides leeway to Pakistan to send terrorists, incite violence.

It could be sending money for the stone pelters -- I am not sure -- but I don't think such a huge movement can be paid for by Pakistan.

Is there a possibility of groups owing allegiance to ISIS emerging in Kashmir?

The problem has become malignant because of inattention. Anything can grow on it now.

Temperamentally and culturally, Kashmir is totally unsuited for movements like ISIS.

Otherwise, the Jamaat-e-Islami should have been the most powerful political party in Kashmir. But in any election it does not get more than 4,5 seats.

Kashmir temperamentally has the Rishi, Sufi culture. Kashmiris go to Sufi shrines which clashes with the ideology of ISIS.

Anybody speaking negatively about Sufi shrines is inimical to Kashmiris.

Is the democratic space shrinking in Kashmir?

It is. When the PDP contested a parliamentary poll, the turnout was good.

In the assembly and panchayat election it (the turnout) was good.

The participation of the people in elections has gone down steadily in the last 2, 3 years.

It is as if Kashmiris are saying thus far and no more.

The voter turnout was held by the Government of India as a badge of pride – that the people of Kashmir believe in India’s democratic process. Has that been dashed this time?

Sheikh Abdullah was in power till 1953. Then he was removed from power.

1953 onwards, all the elections in Kashmir were rigged, it has been acknowledged universally.

Arms were not available so freely then as they are today.

After 22 years the Centre brought Sheikh Abdullah back in 1975. Immediately, the whole scenario changed.

It gave legitimacy to local aspiration. The 1977 election was massive -- the first-ever legitimate, clean election (in Jammu and Kashmir).

After he (Sheikh Abdullah, Dr Farooq Abdullah's father and Omar Abdullah's grandfather) died in 1982, slowly his successors started facing the consequences of illegitimacy.

They lost the people's confidence because the Government of India didn't oblige them about the state's autonomy within the Indian Constitution.

They (the Centre) will talk of devolution of power to other states, but they are not ready to give it to Kashmir which is already entitled to it.

People are suspicious here because Afzal Guru who was 28th in the list to be hanged was hanged because elections were coming.

They (the Manmohan Singh government) thought they would get votes. You need a Kashmiri dead body hanging from the post to get votes -- then what message do you send the Kashmiris?

After 1977 there were legitimate elections. Even during militancy people came out in large numbers to vote.

When you don't fulfil any promises, elections were also robbed of legitimacy.

You said the young are alienated.

How many young people know Gandhi, Nehru? What do they know what their forefathers committed?

They (young Kashmiris) say they have only seen the ugly face of India. They oppress us. Anything we say they kill us.

You said Kashmiri alienation can be addressed by working on the PDP-BJP state government's 'agenda of alliance'.

Give some autonomy which is not dangerous.

India is not so weak that by giving autonomy as defined in the Constitution, Kashmiris will lift Kashmir on their shoulders and go away to Pakistan.