'A new doctrine now needs to be evolved for a new situation, and the army will do it.'
'You won't see more Kashmiris driven in front of army columns.'
'Nor will the army massacre hundreds, Dyer style,' says Shekhar Gupta. 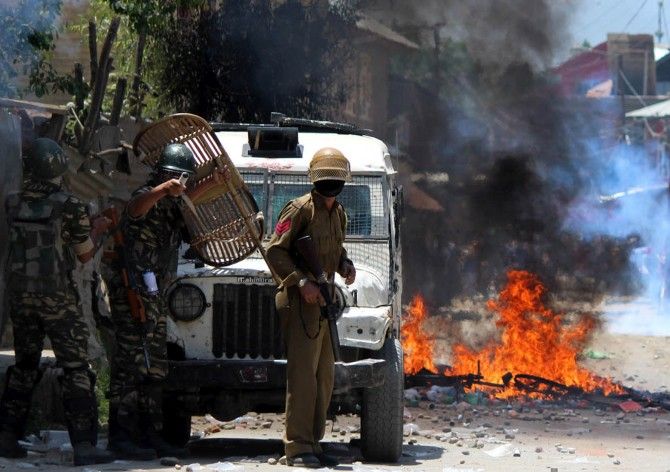 Brigadier General Reginald Dyer was British, but was an officer of the Indian Army.

The 50 riflemen who opened fire at a peaceful Baisakhi gathering at Amritsar's Jallianwala Bagh, killing 396 and wounding more than a thousand, were Indian soldiers.

Within 25 years, the same army was fighting on both sides of a small, one-sided but historic war.

Within three years, in 1947-48 of that fratricide, the army was at war again, this time to protect its own nation, in Kashmir.

The colonial army initially split into two, and eventually three in 1971, with the same ethos, training and command structures.

In both Pakistan and Bangladesh, the same army has held power more than once, and assassinated elected leaders.

Over the decades, Pakistan's army has so institutionalised its indirect control over power it calls the shots as elected governments come and go.

Why take the opprobrium of martial law?

The Bangladeshi army has now depoliticised after two decades of Ershad-Zia misadventures.

In India, over these decades, the army has become more apolitical, business-like.

It's also become ethnically, socially and religiously diverse, stepping out of many colonial fixations like martial races and lately batmen (ok, golfing culture has grown, regrettably).

The Indian Army's ability to adapt and evolve with times, from Dyer to the Azad Hind Fauj to a loyal institution back-stopping a democratic nation is marvellous and must be acknowledged.

Find one sizeable army that stayed out of politics.

The post-colonial evolution of the army has been widely studied in India, although mostly by scholars and historians of military affairs and generally ignored by the eminences of the social sciences.

The period up to the debacle of 1962 is the best documented and it is also the most vital because the army was still Indianising -- there were two categories of officers, holding the King's and the Indian Commission.

Defeats tend to produce better, from-the-heart literature and the army had a generation that brought inherited a commitment to military literature from its past masters, the British.

Subsequently, our military scholarship and literature declined, with just two pieces of work, Lieutenant General Harbakhsh Singh's War Despatches and Air Chief Marshal P C Lal's My Years With The IAF on the air war in 1971 standing out.

There was always Stephen Cohen's The Indian Army which, read with his equally thorough The Pakistan Army, is still a standard text to understand the contrasting way the two siblings, separated by a calamity as in old Bollywood films, evolved in their own ways.

Lately, there has been another set of solid publications.

Four books by Punjab Chief Minister Amarinder Singh, by far the best military historian in India: on Kargil, World War I, a true classic (with Lieutenant General Tajindar Shergill) on the 1965 war and the latest on the Battle of Saragarhi, hailed as the Sikh Regiment's Thermopylae.

I am being deliberately repetitive: I do not find on any bookshelf a substantive study on this fascinating socio-military-political institution, written by a professional Indian social scientist.

It is as if the army, as we wanted, decided to stay out of our life, and our scholars responded by leaving it alone.

They demilitarised their minds -- even Raghavan, a world-class scholar, is a former army officer.

Let the army live in its cantonments. It is this intellectual secession from the military that leads to a regrettable misjudgement like the Rawat-Dyer comparison.

To understand how India succeeded in keeping its army out of politics, Wilkinson is a must-read. He tells you of the evolution of the military thought from Cariappa to Manekshaw through four wars and onwards, but also of how the system worked together to change the social and ethnic composition of the army.

To make it more diverse over the decades, shrewdly reducing the domination of one ethnicity, the Punjabis, shrugging the colonial legacy of martial races and, ultimately, assigning recruitment quotas to states according to their population.

Of course, he fishes out some nuggets like then defence minister Jagjivan Ram's keenness to bring more Dalits into the army and the letter Manekshaw wrote to Lieutenant General S K Sinha to 'handle it' -- as a Bihari he would know how to do it.

Civilian governments have, however, kept leaning on the army for help often -- in aid to civil power -- when it operates under a magistrate's orders and sometimes to fight insurgencies autonomously, empowered by the Armed Forces (Special Powers) Act.

The mention of both, ironically, brings General Dyer back in our lives.

Whatever Dyer's justification for the Jallianwala Bagh massacre, much of the British establishment did not buy into it and it led to the Indian Army (then) instituting new protocols for civilian control, necessitating the presence of a magistrate and written orders for firing at a crowd.

These protocols still exist when the army is called out in aid to civil power.

Later, during the Quit India Movement, when the army had to be employed pro-actively they empowered it with the Armed Forces Special Powers Ordinance, the father of today's AFSPA.

This is documented by Raghavan in his Protecting the Raj: The Army in India and Internal Security, published in the December 2005 edition of the journal Small Wars and Insurgencies.

Now, think, and I too go back to my own memory bank of covering four decades of civil strife and insurgencies.

Do we recall any incidence of the army opening fire at a mob and massacring people?

Don't tell me about Operation Bluestar which was a firefight where 149 armymen were killed too.

Or about Gawakadal in Kashmir, 1990, because it wasn't the army, but paramilitary forces.

Nor about many human rights abuses, fake encounters, some rapes, handled relatively leniently till the mid-nineties but subsequently punished firmly.

These are excesses in counter-insurgencies. Think mobs and angry crowds.

The army has never had to fire at one, because the bad guys go away the moment they see the army.

Because they know the army will be tough, and non-partisan.

All the debate about these big massacres is over the delay in calling out the army.

In Kashmir too, the army has never been challenged by crowds.

Wherever it has operated against terrorists, local people have stayed out of the way. This has lately changed with stone-throwing crowds forming human shields for terrorists.

The army has to find a doctrine to counter this new challenge and it can't be a tit-for-tat use of human shields. But should it fire at crowds that obstruct it?

The chief, General Bipin Rawat, talking aloud, or may be fulminating, could surely have chosen his words better. But also put yourself in his boots.

A new doctrine now needs to be evolved for a new situation, and the army will do it.

You won't see more Kashmiris driven in front of army columns. Nor will the army massacre hundreds, Dyer style.

That's why this comparison (external link) is contemptuous of reality. 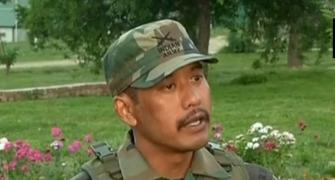