Twenty-four COVID-19 patients, with at least 11 of them on ventilator support, suffocated to death on Wednesday when their oxygen supply stopped suddenly because of a malfunction in the main storage at a civic-run hospital in Nashik in Maharashtra, officials said. 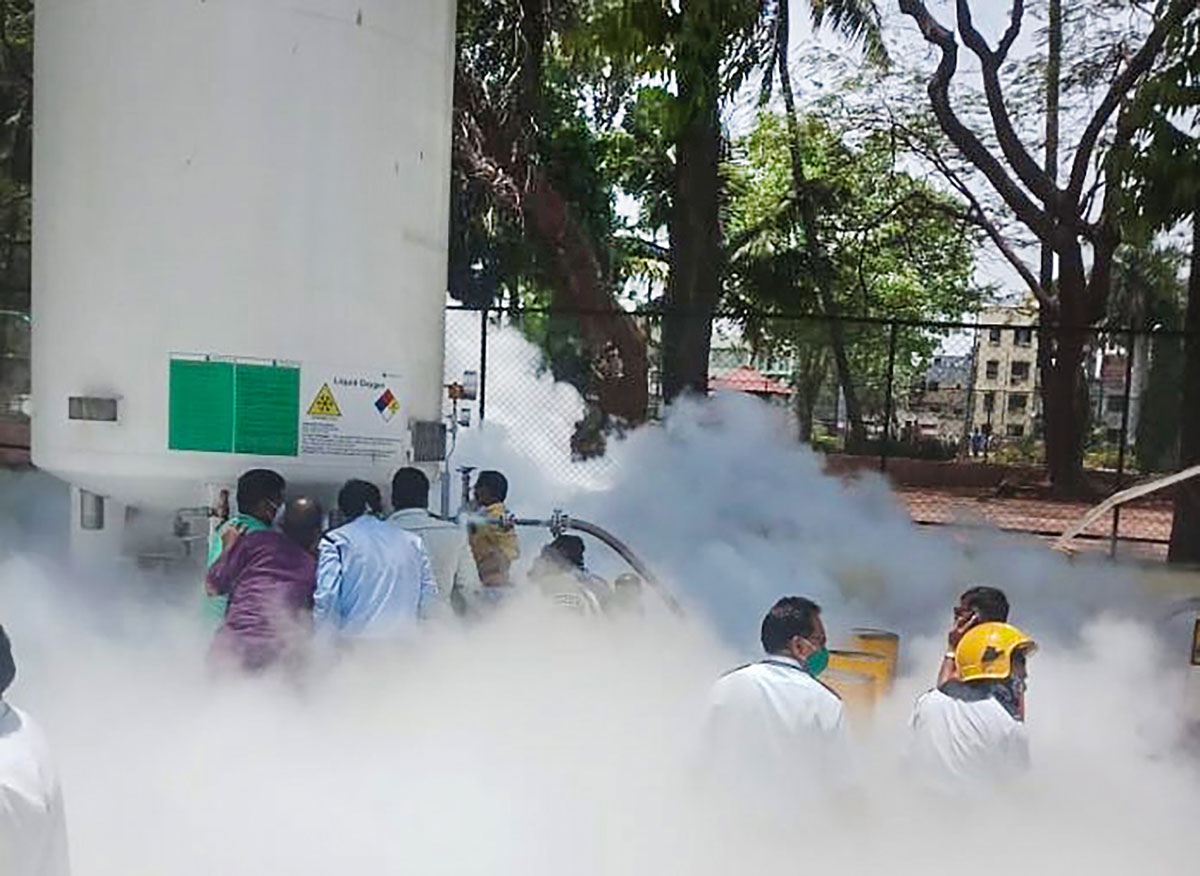 IMAGE: Medical oxygen gas leaks out from a storage unit, which led to interruption in supply of oxygen to COVID-19 patients at Zakir Hussain Municipal Hospital, in Nashik. Photograph: PTI Photo

While 22 patients died soon after the incident that occurred in the afternoon at Dr Zakir Husain Hospital in Dwarka area of the city, two other patients succumbed in the evening, they said.

The Maharashtra government announced a probe by a seven-member committee into the incident, and Chief Minister Uddhav Thackeray said that financial assistance of Rs 5 lakh would be provided to the families of each victim.

The disruption of medical oxygen supply was caused by leakage from a storage plant, officials said.

An official said the incident occurred when oxygen was being filled in one of the tanks from a tanker, which disturbed the supply to the patients who were on ventilators as well as to those dependent on oxygen for breathing.

The Nashik Municipal Corporation issued a statement in the evening, in which it said that a total of 157 patients were receiving treatment in the 150-bed COVID-19 hospital when the incident occurred. Of these, 131 patients were on oxygen support, 15 on ventilator and 61 were critical.

While the NMC maintained that the number of victims was 22, District Collector Suraj Mandhare said two others died in the evening. 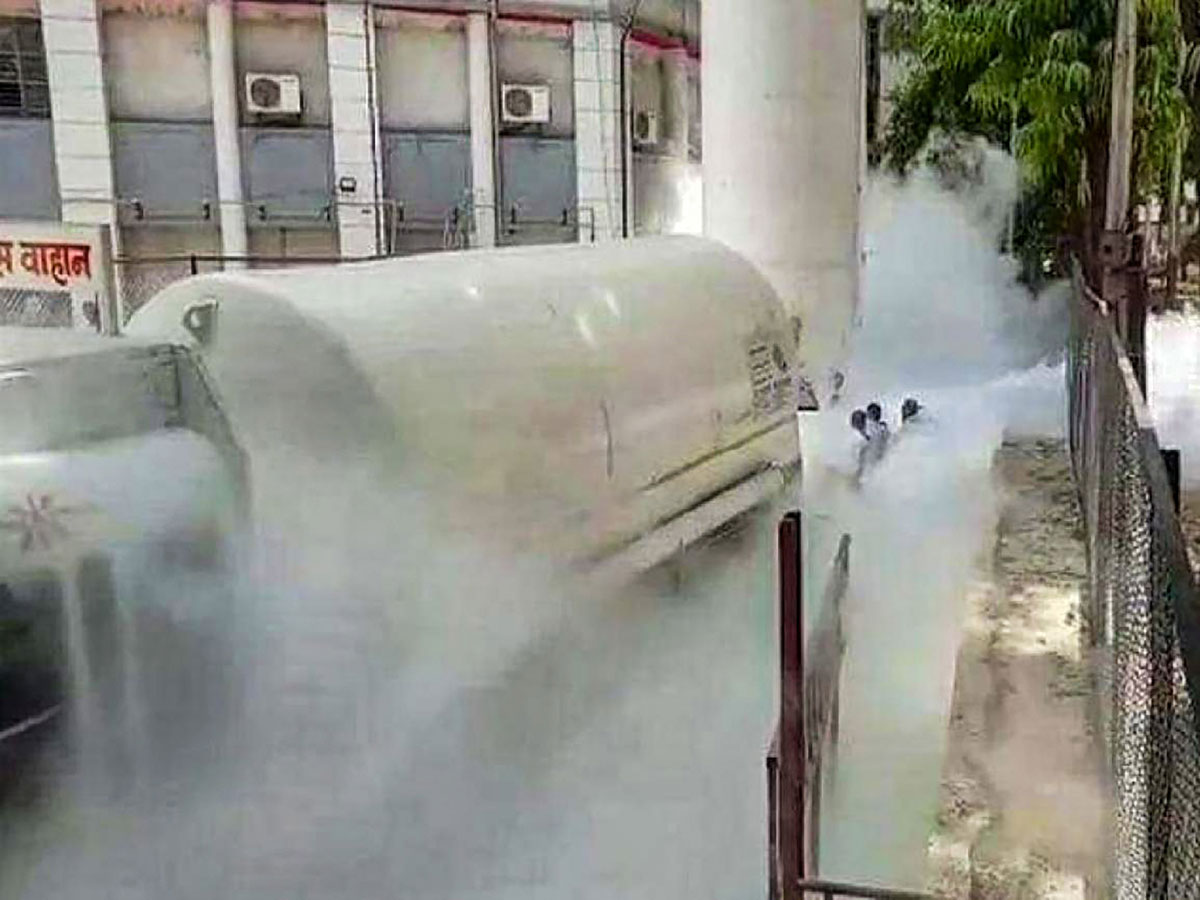 IMAGE: Sources said two oxygen tanks were recently set up at the hospital and the task of maintaining the oxygen storage and maintenance has been given to a private company.. Photograph: PTI Photo

The deceased were in the age group of 33 to 74 years, the civic body said.

"Around 10 am, a socket of the oxygen storage tank broke and the leakage started. When the hospital staff came to know about it, they deployed jumbo cylinders to supply oxygen to the patients and started shifting some of the patients," an official said.

The leakage was stopped, the tank repaired and the oxygen supply was normalised, he said.

Soon after the incident, people rushed to the hospital hindering rescue operations.

"An oxygen tanker had reached the hospital premises when the leak happened. Technicians who came with that tanker and technicians at the hospital broke open the lock of the tank and closed the valve which prevented the further leakage of oxygen," he said.

The municipal corporation shifted cylinders from other facilities in the city to help the patients at the hospital after the leak, which was noticed around 12.30 pm, an official said. Hospital officials then contacted municipal commissioner Kailash Jadhav seeking technical help to stop the leakage. 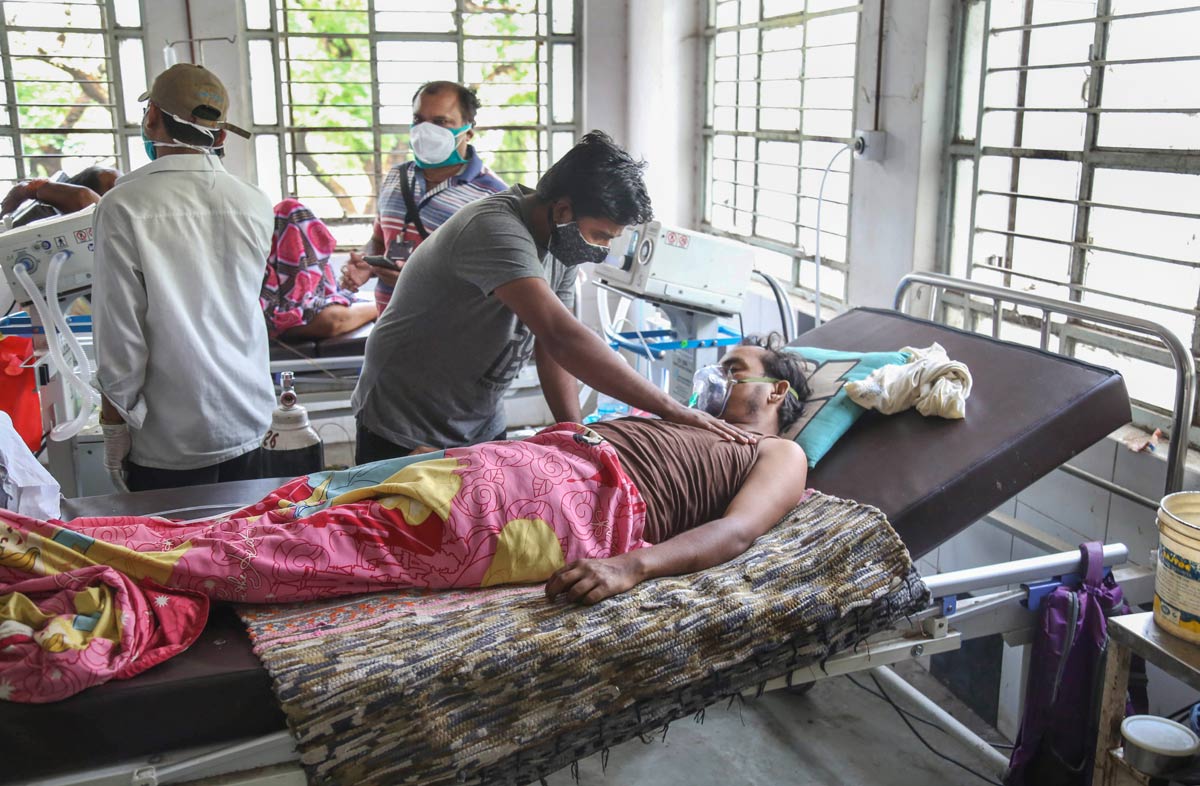 The NMC said in its statement that as the oxygen supply to patients decreased at around 12.30 pm, the hospital administration inspected the tank. In the inspection, leakage was found on the lower side of the tank. As a result, oxygen level in the tank was decreasing rapidly and patients were not getting oxygen with sufficient pressure, it added.

Later, the supply of oxygen to the hospital was regularised by around 2 pm, it said.

Collector Mandhare said a private company looked after the tank maintenance at the hospital and after the leakage, technicians closed the tank valve, which prevented more deaths.

Three days before the tragedy, the Union health ministry's COVID-19 data compiled between March 16 and April 15 from major cities showed Nashik the worst-hit city in the country in terms of cases per million residents.

State Health Minister Rajesh Tope said, "The liquid oxygen which was filled in the tank has the temperature of around (minus) 180-degree celsius. There is extreme pressure on the walls of the tank which supplies oxygen to patients on ventilator support."

The oxygen level was around 25 per cent in the storage tank at the time of the incident, he said.

Two oxygen tanks were set up at the hospital recently and the maintenance work was given to a private company. 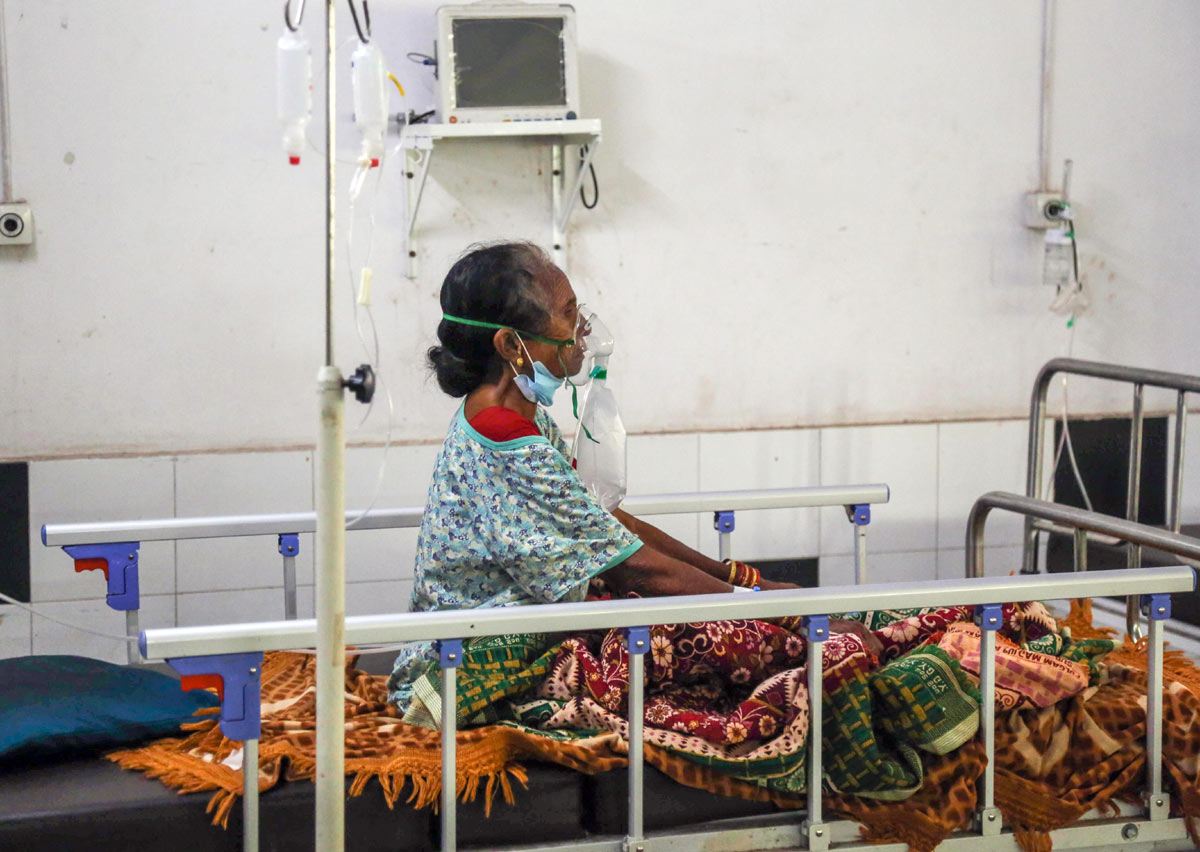 Tope said the committee to probe the incident will be headed by Nashik divisional commissioner Radhakrishna Game, which will also give recommendations to update existing safety norms to help avoid such incidents in future.

"If anyone is responsible for the deaths, they will face legal action," the minister said.

The family of each deceased will be given financial assistance of Rs 5 lakh each from the CM relief fund.

Besides this financial assistance, the kin of the deceased will also get Rs 5 lakh from the NMC, Tope said.

Leela Shelar, who lost her 60-year-old mother in the tragedy was inconsolable. "My mother was admitted on Tuesday and put on ventilator support," she said. 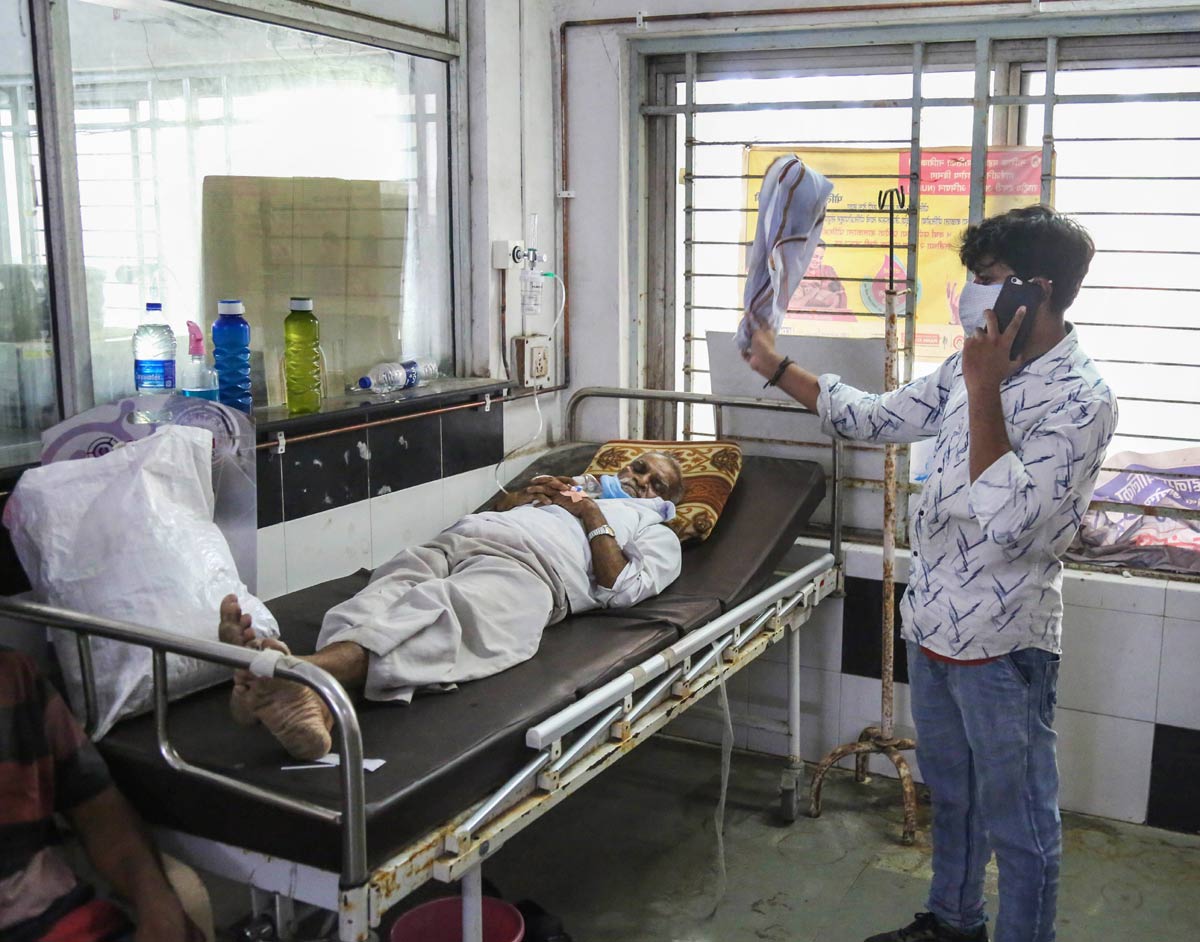 IMAGE: The incident occurred when oxygen was being filled in one of the tanks from a tanker, which disturbed the supply to the patients who were on ventilators as well as to those dependent on oxygen for breathing. Photograph: PTI Photo

In a statement, CM Thackeray said, "I do not know how to console the families who lost their members in this accident. Though it is an accident, there will be a thorough probe into it."

Shelar said as her mother complained of difficulty in breathing, she had requested the nursing staff to help, but they didn't pay heed.

"I didn't admit my mother here to die like this," she said while fighting back her tears.

A video of oxygen purportedly leaking from the storage plant went viral on social media in the morning.

Relatives of the deceased reached the hospital soon after hearing of the incident and are demanding that stringent action be taken against those responsible for the tragedy.