Some major government and private hospitals in Delhi received fresh stock of medical oxygen in the early hours of Wednesday, averting a crisis just in time, according to officials. 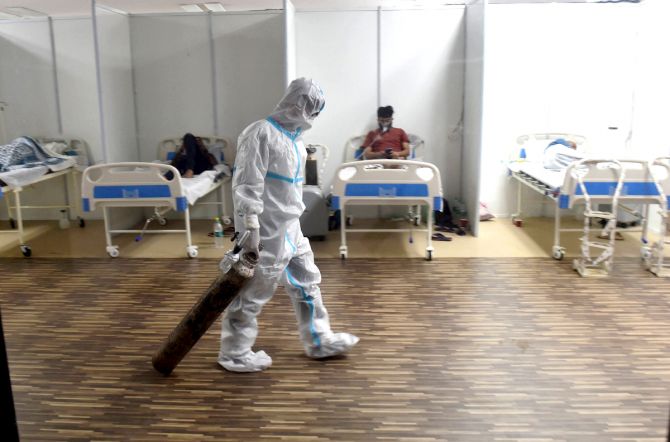 Gangaram Hospital received 5,000 cubic metres of oxygen supply from a private vendor before 3 am. This stock should last till Wednesday afternoon. The supply from another oxygen firm is still awaited, sources said.

An official at the Guru Tegh Bahadur Hospital confirmed that a truck carrying oxygen from a firm reached them around 1:30 am.

Dr Suresh Kumar, medical director of the Lok Nayak Jai Prakash Narayan Hospital, said a truck carrying oxygen from a vendor reached the facility around 3 am.

Chief Minister Arvind Kejriwal had on Tuesday urged the Centre "with folded hands" to provide medical oxygen to Delhi and his deputy Manish Sisodia said there will be chaos in the city if the stocks are not replenished by Wednesday morning.

"Most hospitals in Delhi have only eight to 12 hours of oxygen left. We have been asking the Centre to increase its supply for the last seven days. There will be chaos in Delhi if hospitals do not get enough oxygen by Wednesday morning," Sisodia had tweeted in Hindi.

He had also posted a note on Twitter mentioning the status of oxygen stock in various hospitals.

According to the note, Lok Nayak Jai Prakash Narayan Hospital, Deen Dayal Upadhyay Hospital, Burari Hospital, Ambedkar Hospital, Sanjay Gandhi Hospital, B L Kapoor Hospital and Max Hospital in Patparganj were among those having only eight to 12 hours of oxygen left at 6 pm on Tuesday.

ICU beds in Delhi hospitals were also filling up fast.

Only 28 of them were available for coronavirus patients in government and private hospitals across the national capital at 9 am on Wednesday, according to data from the city government's Delhi Corona app.

Health Minister Satyendar Jain had sent an SOS to Union minister Piyush Goyal at 10:20 pm, saying “oxygen at GTB Hospital may not last beyond 4 hrs”.