News
Business
Movies
Sports
Cricket
Get Ahead
Money Tips
Shopping
Sign in  |  Create a Rediffmail account
Rediff.com  » News » We must all plan for new reality: PM to CMs

We must all plan for new reality: PM to CMs

Prime Minister Narendra Modi on Monday said reduction of transmission rate of the novel coronavirus and gradual increase in public activities while adhering to all guidelines are the "twofold" challenges and now the Centre and states will have to work towards achieving the twin objectives.

The prime minister reaffirmed the importance of do gaz doori (a distance of two yards) and added that suggestion of "night curfew" raised by many chief ministers would surely reaffirm the feeling of caution among people.

Referring to the resumption of train services, Modi said it was needed to rev up the economic activity. But, he made it clear that services on all routes will not be resumed and that only a limited number of trains would ply.

Nearly two months after it suspended operations of passenger trains over the coronavirus crisis, the railways will resume services with 15 pairs of trains on select routes from Tuesday.

Referring to the twin objectives, he said "We can now focus our strategy in this battle against coronavirus, as should be the case. We have a twofold challenge –- to reduce the transmission rate of the disease, and to increase public activity gradually, while adhering to all the guidelines. We will have to work towards achieving both these objectives."

As thousands of migrant workers reach their native states on board special trains, Modi also emphasised on the need to stop the spread of COVID-19 to rural areas.

Rendered jobless due to lockdown, scores of migrant workers have started returning to their home states.

About the concerns raised by several chief ministers during the lockdown period, Modi said suggestions made by the states for a "roadmap on economy" have been given "due consideration".

The prime minister asked the chief ministers to share by May 15 a broad strategy on how they want to deal with lockdown regime in their states.

"I request you all to share with me by May 15, a broad strategy on how each one of you would want to deal with the lockdown regime in your particular states. I want states to make a blueprint on how to deal with various nuances during and after gradual easing of the lockdown," he said.

The chief ministers in their suggestions on reviving the economy have sought support to micro, small and medium enterprises, infrastructure projects such as power, easing of interest rates on loans and assured market access to agricultural produce, the statement said.

Compulsory quarantining of the stranded Indians returning from abroad by air and sea routes was also highlighted.

Modi said, "We must understand that the world has fundamentally changed post COVID-19."

"Now the world will be pre-corona, post-corona just like the case of the world wars. And this would entail significant changes in how we function," the PM was quoted as saying in the statement.

Modi pointed out that the new way of life would be on the principle of jan se lekar jag tak (from an individual to the whole of humanity).

"We must all plan for the new reality," he said.

The prime minister said the country will need an all-encompassing approach to deal with various challenges that will arise before it.

"With the onset of monsoon, there will be proliferation of many non-COVID-19 diseases, for which we must prepare and strengthen our medical and health systems," he said.

Modi asked the policy-makers to also keep in mind how to embrace new models of teaching and learning in the education sector. 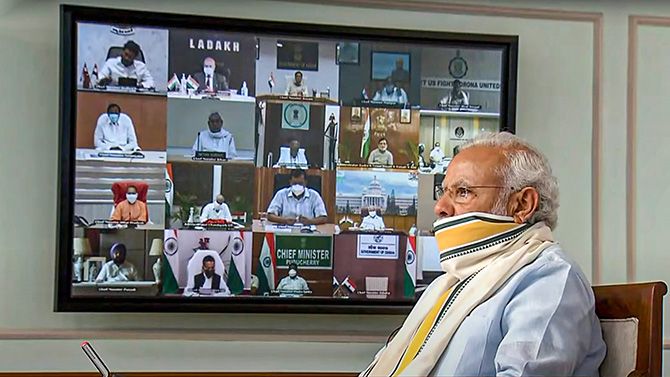 Referring to tourism, the prime minister said he saw potential for domestic tourism "but we need to think of the contours of the same".

Modi said he continues to feel optimistic as not even a single state sounded despondent and that this collective determination will make India win the fight against COVID-19.

He also pointed out that the post-COVID era will also bring opportunities that India must leverage.

The interaction comes in the midst of growing demands by states, industries, workers and several political leaders to withdraw the lockdown from non-COVID areas as it has adversely impacted the economy and livelihoods of a large section of people.

According to a Delhi government official, during the interaction, chief minister Arvind Kejriwal said barring containment zones, economic activities should be allowed to resume in the national capital.

"During the interaction, the chief minister said economic activities should be allowed to resume in Delhi, except in COVID-19 containment zones," a source said.

Punjab chief minister Amarinder Singh pitched for the extension of the coronavirus lockdown, but demanded a carefully crafted exit strategy, including fiscal support to states.

In view of the increasing number of coronavirus cases, continuation of the lockdown was needed, Singh said, adding the decision on designating red, orange/yellow and green zones should be left to the states, which are more cognizant of the ground realities.

The exit strategy should consider and focus on fiscal and economic empowerment of the states, the Punjab chief minister said.

In the conference, Tamil Nadu chief minister K Palaniswami came out against the resumption of flight and passenger train services till May 31, citing increase in the number of coronavirus cases.

During the interaction, Modi also appreciated the role played by the states in the fight against the pandemic, and said the entire world is of the view that India has been able to successfully protect itself from the pandemic, according to official sources.

The "problems" have increased wherever the social distancing norms were not followed or there has been laxity in implementation of the lockdown guidelines, Modi told the chief ministers.

Reacting to the Centre's decision to resume a limited number of passenger services from Tuesday after an almost a 50-day hiatus, West Bengal chief minister Mamata Banerjee said on one hand, it wants strict enforcement of the lockdown, on the other, it is resuming train services.

The last interaction the prime minister had with the chief ministers was on April 27. And days after the meeting, the central government had extended the lockdown by two more weeks till May 17 to arrest the spread of the virus, but gave several relaxations in economic activities and movement of people.

According to the Union health ministry on Monday, India registered a record jump of 4,213 COVID-19 cases in a single day, taking the total number of COVID-19 cases to 67,152 with a death toll of 2,206.

Source: PTI  -  Edited By: Roshneesh Kmaneck© Copyright 2021 PTI. All rights reserved. Republication or redistribution of PTI content, including by framing or similar means, is expressly prohibited without the prior written consent.
Related News: Narendra Modi, India
SHARE THIS STORY
Print this article 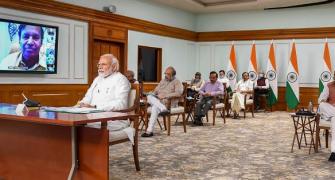 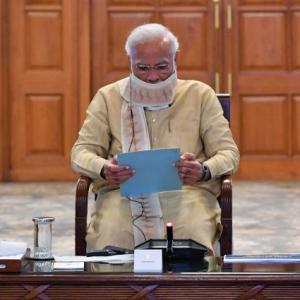 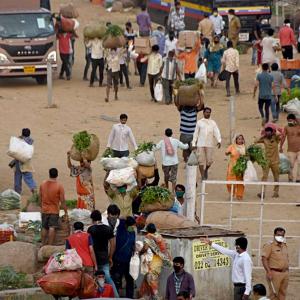