With its gaze steadily fixed on the well-being of its people, the government is going about taking all the imperative measures that need to be taken to beat back the pandemic, observes B S Raghavan. 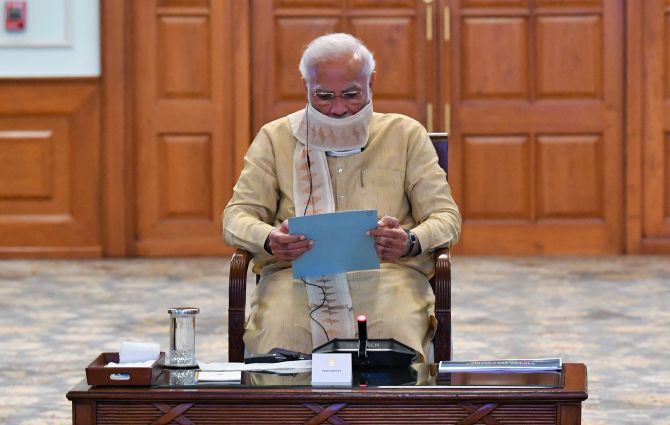 If the coronavirus is susceptible, as is claimed, to heat, it would have by now been incinerated in the intense political heat generated in the wordy wars that are being waged hurling various kinds of omissions and commissions against all and sundry.

Dire predictions of Doomsdays are being made: Of a second, third and God knows how many onslaughts of the disease resulting in untold number of cases and fatalities; economic recession, Depression, collapse; corporates folding up; all round unemployment; climaxed by an Apocalypse and Armageddon.

Recommendations in their thousands, most mutually conflicting, have been pouring in from all over the globe -- the less knowledgeable in worldly affairs and the less hands-on experience in management and governance, the more the certitude in making them.

Everyone is unceasingly hectoring India across an infinitely wide spectrum from countering COVID-19 to reviving business to catapulting the economy to fostering 'cooperative federalism' to conducting international relations.

Of course, to all these versatile Know-Alls who have not managed a single tea shop in their lives, nothing that the Indian government has done is right and everything that it has taken up has been botched.

Does this mean that the Modi government is infallible? Of course, it isn't.

That it has no failings? Of course, it has.

Which set-up composed of human beings can be above these? But what the nit-picking Know-Alls fail to realise is that a government, particularly of a country like India, is a bewilderingly, and sometimes intractably, complex organism, with innumerable traps to avoid and levers to operate in the running of which all the three Murphy's Laws come into play: 1. Nothing is as simple as it seems; 2. Everything will take longer than planned; 3. If anything can go wrong, it will.

Taking all that into consideration, the Modi government is delivering the goods as a government should.

Let us take the four charges that obsessive bad mouthers never omit to harp on. 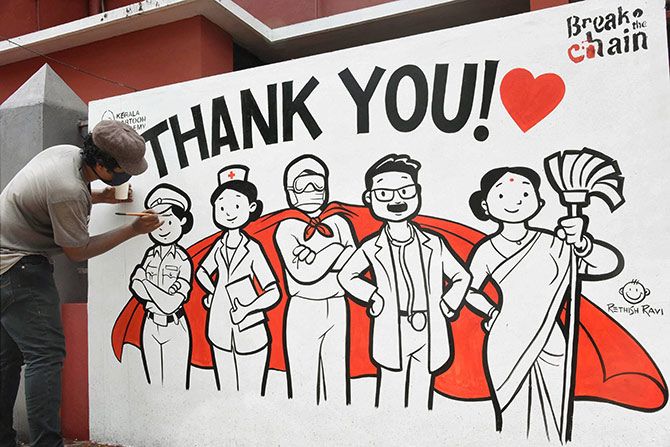 IMAGE: A cartoonist draws on the wall of a hospital to express gratitude towards frontline COVID-19 warriors, in Kochi, May 5, 2020. Photograph: PTI Photo

The first is that the Modi regime is bent on suppression of dissent and denial of civil liberties and displays an autocratic mindset worsened by State vendetta against opponents.

All this is ostensibly rooted in the right-wing 'fascist' ideology of the Bhartiya Janata Party, which, in turn, is the cat's paw of the Rashtriya Swayamsevak Sangh.

I grew under the shadow of freedom heroes and pride myself in being nurtured in the values of Gandhi and Nehru.

I refuse to concede that I am second to anyone in my passion for fostering of freedoms.

However searchingly I may look at happenings in the country, I see no shred of evidence in this regard.

Nor have the nattering nabobs of negativism (to borrow Spiro Agnew's words) offered any shred of evidence other than rhetoric.

They go on repeating this charge in the Goebbelsian belief that it may stick.

Unfortunately for them, the electorate has rejected, and will reject yet again, the practitioners of such tactics.

I have a few questions to ask of them: Why do people like them bristle at any comment at all on Muslims, and call it 'communalisation', and take cudgels against the person commenting?

Why do Indians of their ilk find it obligatory to become the spokespersons and apologists of Muslims?

Don't Muslims have their own kind -- fully 200 million of them with their own associations and organisations -- to take that role?

Has this peculiar class of Indians witnessed any similar phenomenon in other 'secular' countries such as France, the UK, the USA, Japan where native public and political figures jump to become spokespersons of Hindus resident there if they are commented upon?

Will other religionists have the freedom to do so in Muslim-dominant countries?

If someone mentions the possibility of the Tablighi Jamaat congregation being a source of spike in coronavirus cases, why does this class of Indians get rattled?

Why don't they leave it to the Tablighi Jamaat to convince the people that they took all precautions not to be the source of infection?

The second line of attack of Modi-baiters is demonetisation.

On this particular obsession of theirs, they are like a dog with a bone: They will never let go despite being told again and again that the average resident of the real Bharat saw demonetisation as a well-intentioned and much-needed catharsis which was worth its while.

That was why while the English-educated, Western-oriented so-called intellectuals were tearing their hair ascribing all kinds of tortures to it, the people in the mass patiently and peacefully stood in queues before banks and put up with the inonveniences that were part of a massive nationwide operation that had to be inevitably undertaken as a surprise.

<p=>There was not one instance of riot or law and order disturbance over it in a country which was called a functioning anarchy.

The glitches in the implementation of GST and the number of course corrections that had to be made are their third strident charge.

They forget that it is a historic first the multiplier effect of which will be of incalculable benefit jacking up the economy to unprecedented heights in future years.

The fourth is the so-called unpreparedness about the corona crisis, especially with reference to the migrant labour and the inadequacy of the relief package.

It was a literally a life-and-death operation on a continental scale and whatever initial wrinkles were there are being smoothened and things look like settling down.

All one needs to do to get a sense of this is to just have a look at the way the world's most affluent, militarily the most powerful, technologically the most advanced, and as the world's policeman and mentor, the most pretentious, the United States of America, no less, is bungling the handling of the crisis.

Look at the chaos that prevails in most other advanced countries and the predicament they are in.

It is impossible to keep one's head, when everybody else is so determinedly losing his.

But India is doing the impossible, despite all its institutional, systemic and resource constraints, its vast population, its complexities and diversities, and the tendency of its denizens to pull in different directions. Quietly, composedly, committedly, with its gaze steadily fixed on the well-being of its people, and adhering to basic democratic tenets, undeterred and undaunted, the government is going about taking all the imperative measures that need to be taken to beat back the pandemic and mitigate its severity on the one hand and, on the other, to inject pep into its economy and keep it on an even keel.

There is one explanation, and one alone, for this: The decisive leadership and the unblinkered vision of Narendra Damodardas Modi and the solid support and the unwavering understanding he enjoys from the teeming mass of the people.

His standing has been bolstered by the fact that, unlike the ever-tottering, potty patchworks, miscalled governments, of the past 30 years, his is one with a sizeable majority of its own -- a feat achieved on the strength of his own charisma and appeal.

For the first time in 30 years and more, India has a rock-like government that boldly governs.

From all signs, Modi seems all set to breeze in with a record electoral triumph in 2024.

The Khan Market gangs, the Lutyens lackeys, the self-professed, self-serving sickulars, the English-touting, half-baked hybrids -- all had better prepare themselves to reset their moorings and bearings to face that eventuality. 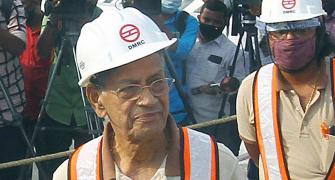