Labourers reaching Lucknow from Delhi and other states had a similar tale to narrate that they had no money and food, forcing them to return to their homes. 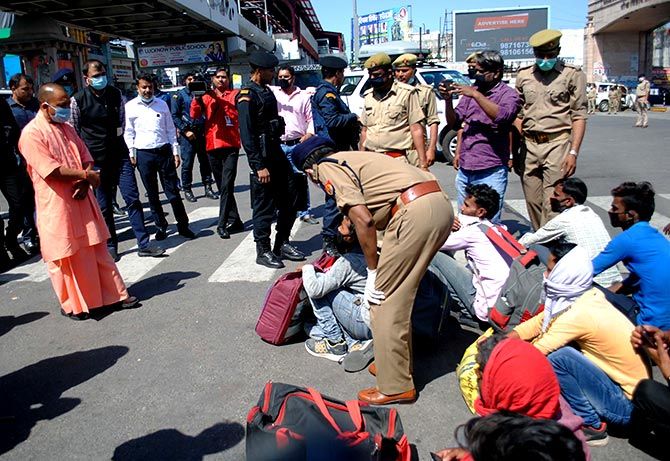 The state government has decided not to charge any ticket amount to any labourers, workers and families who are travelling in state-run buses, said Raj Shekhar, the managing director of the Uttar Pradesh State Roadways Transport Corporation.

He added that the conductor need to maintain the way bill details for further necessary action, and the expenditure will be reimbursed by the government.

"This will be implemented with immediate effect," he said.

After covering several kilometres on foot along with their families, the labourers, who reached Charbagh bus station in Lucknow on Saturday and Sunday, said there was no point staying in Delhi as they have exhausted their funds and it would be better for them to return to their homes.

Pankaj Chauhan, who returned to Lucknow from Hazrat Nizamuddin, had his face covered with a handkerchief as a precautionary measure.

"I have to go to Kanpur and I am waiting for my bus," Chauhan said.

Asked whether any arrangement had been made in Delhi for them or not, Chauhan said "our ration stock has exhausted, and funds too have been exhausted".

A state government officer had on Saturday said transport officers, drivers and conductors were called in the night from their homes and around 1,000 buses were arranged.

"UP chief minister himself monitored the situation and more than 1,000 buses were pressed into action to bring stranded people in Noida, Ghaziabad, Bulandshahr, Aligarh and Hapur to their respective
destinations," the officer said.

In a statement, Lucknow District Magistrate Abhishek Prakash said: "Around 70,000 food packets have been prepared to cater to huge number of people coming from the National Capital Region."

A large number of people from other states reached the expressway toll plaza in Lucknow. The district administration is providing them lunch and drinking water.

At the toll plaza, Prakash instructed the people to sit at a distance of two metres and strictly follow social-distancing norms.

In Aligarh, hundreds of stranded migrant workers from the NCR are desperately searching for means of transport to reach their native towns and villages. These migrants, including and children, are concentrated
on the outskirts of the city.

Most of these stranded people are heading to Agra, Etah and Kasganj. Some of the stranded are also from distant locations in eastern Uttar Pradesh.

"The police is sparing no efforts in arranging transport for these stranded passengers. More than 65 buses of the UPSRTC were yesterday pressed into service for this task," Senior Superintendent of Police
Muniraj G said.

On the other hand, police have intensified stringent measures against residents in the city who are wilfully violating the lockdown. 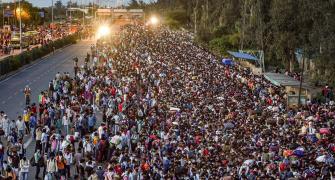 'Migration of workers should be over in 2-3 days' 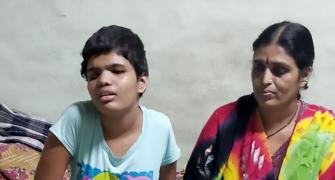 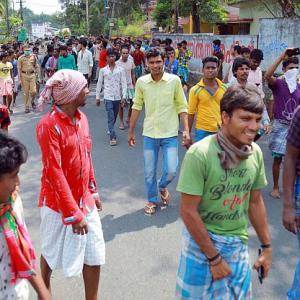