'We had no inkling this would come. Admittedly, we failed to inspire confidence in migrants that no harm would come to them if they stayed back.' 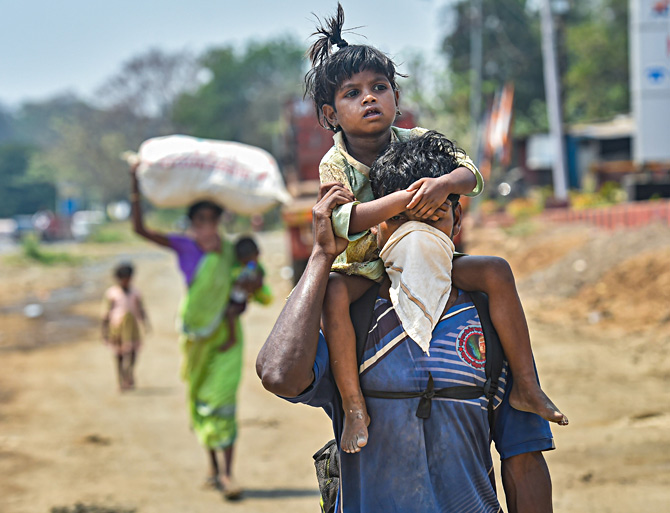 IMAGE: A migrant worker along with his family walks along the Mumbai-Ahmedabad highway, following the coronavirus lockdown, in Palghar, Maharashtra. Photograph: Mitesh Bhuvad/PTI Photo

If Amit Shah jumpstarted his innings as Bharatiya Janata Party president in 2014 with a record-breaking membership drive, the Covid-19 crisis and the concomitant fallout of the lockdown posed the first big test for J P Nadda, Shah’s successor.

His reflexes -- as that of the BJP and the Rashtriya Swayamsevak Sangh fraternity -- kicked in on March 26, two days after Prime Minister Narendra Modi announced the lockdown.

Nadda directed the BJP-ruled states to create roti banks -- a concept borrowed from a Delhi partyman, Rajkumar Bhatia, who started mass production and distribution of rotis in his area, Adarsh Nagar, back in 2015 -- at every Shakti Kendra, the nuclei of three to six booths, to feed migrants and casual workers.

Nadda asked state functionaries to identify community kitchens working in their neighbourhoods to function as food producer and conduit.

He led by example, setting up a community kitchen at his Delhi house to service police persons working 24x7.

The BJP’s penchant for numbers tempted Nadda to fix a target: Mobilising 10 million party workers to feed 50 million people of the country every day. Every block, including the ones in villages, was expected to cover 1,000 people daily.

“An ambitious goal in these circumstances,” remarked a BJP source.

However, as the disease spread unchecked, ground rules were put in place.

“We decided to enlist a few volunteers, instead of crowd-sourcing, and told them strictly to work only with the local administration so that they were not infected. If a volunteer has to himself deliver medical kits and food, he must only deposit it outside the recipient’s house and avoid direct contact,” a BJP functionary said.

Another BJP office-bearer acknowledged the party was nudged to “act” when confronted with the mass exodus of migrants from Delhi that followed the enforced-confinement.

“We had no inkling this would come. Admittedly, we failed to inspire confidence in migrants that no harm would come to them if they stayed back,” he said.

The admission was politically significant because most of the eight seats the BJP won in the Delhi assembly elections were in the migrant-dominated pockets.

“We got cut off from them thereafter,” conceded a Delhi BJP office-bearer.

However, once Nadda’s “let’s feed the poor” project rolled out, the BJP made it incumbent on general secretaries to attain the target.

At six every evening, office-bearers assemble for a video/audio conference call with their assigned states to monitor the scale and spread of the distribution and cross-verify the feedback with their own sources on the ground.

The BJP’s youth front, the Bharatiya Janata Yuva Morcha, evolved its own template.

Poonam worked out of Mumbai and coordinated with her national team through videos and WhatsApp.

“If I get a call from outside Maharashtra, the relevant helpline numbers are there before me to connect with a worker and ask him to attend to the caller,” she said.

“Ours is the first youth wing of any political party in the world that actively intervened in the crisis,” claimed Poonam.

But Poonam’s prototype was not necessarily emulated by the BJYM in the other states, Delhi being an example.

A Delhi functionary said, “We work under multiple command structures. We have to listen to the national president, Manoj Tiwari (Delhi BJP president), local MPs, and then Poonam. It gets confusing.”

The RSS affiliates, notably the Rashtriya Sewa Bharti and the Vishva Hindu Parishad, function independently or act as reinforcements to the administration/the BJP.

"Ours is to try and alleviate their hardships for which we have a network of nearly 25,000 swayamsevaks and sympathisers," he said.

"Last week, a worker, walking from Delhi to Azamgarh, reached Mainpuri, exhausted. He had my number and asked for help. I phoned our local unit. They arranged for his shelter with a local family. Sewa Bharti returned the hospitality by giving the family cereals, pulses and oil," Kumar said.

Like the BJP, the VHP preferred to operate through the administration and local temples, and hospitals for “safeguard” of its activists.

Milind Parande, the secretary-general, said the VHP’s intended beneficiaries were “policemen, rickshawallahs and daily wage-earners, and stranded students” in that order.

However, there’s a possibility that the Sangh Parivar’s altruism-in-progress might get distracted with the controversy over the Tablighi Jamaat’s Delhi congregation in mid-March that left several virus-infected.

Nearly every RSS constituent reacted, with the BJP’s IT cell head, Amit Malviya, leading the chorus against the TJ.

“Delhi’s dark underbelly is exploding!” Malviya declared in a tweet. 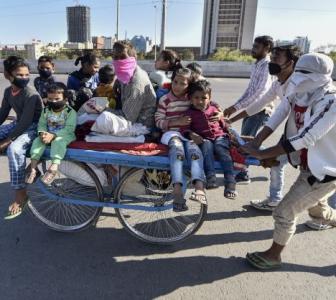