Observing that the 'finality' of death sentence is extremely important, the Supreme Court on Thursday said condemned prisoners should not be under the impression that the death penalty remains 'open ended' and can be challenged all the time by them.

In remarks that came against the backdrop of the four death row convicts in the 2012 Nirbhaya gang rape-murder case filing one petition after another leading to the delay in their hanging, the court stressed it has to act as per law and judges also have a duty towards the society and the victims to deliver justice.

The observations were made by a bench comprising Chief Justice S A Bobde and Justices S A Nazeer and Sanjiv Khanna while hearing the review pleas of a woman and her lover for killing seven members of her family including parents, two brothers and their wives and strangulating her 10-month-old nephew in Uttar Pradesh in 2008.

The bench reserved its verdict on their review pleas against its 2015 judgement upholding the death penalty to the two convicts.

"One cannot go on fighting endlessly for everything," it said.

"The finality of death sentence is extremely important and a condemned prisoner should not be under the impression, that the death sentence remains open ended and can be questioned by them all the time."

The remarks came when senior advocates Anand Grover and Meenakshi Arora pleaded for leniency and commutation of the death penalty of Shabnam and her lover Saleem on the ground they be afforded an opportunity to reform themselves.

The plea was vehemently opposed by Solicitor General Tushar Mehta.

"A convict cannot seek mercy after killing his parents that oh ho, now I have become an orphan," said Mehta, who appeared for the Uttar Pradesh Government.

The law officer said that after convictions, a ground is being allowed to be taken that the death row convict has reformed himself or herself in jail then everybody will take that plea and it would open a new legal avenues for such condemned criminals.

The bench asked the lawyers to provide it the judgment on the issue whether the court is obliged to consider the plea of reformation for commuting the death penalty of the convicts post their convictions in heinous cases like the present one.

"Every criminal is said to have an innocent heart. However, we have to look into the crime also," the bench said when the ground of possible reformation of convicts was argued as one of the mitigating circumstances for commuting death penalty.

The bench said the scope of review plea was limited and the condemned prisoners were required to only show the 'error apparent on records' of the apex court's earlier verdict.

"We do not like to emphasise only on the life and death penalty of an accused, especially when lives of seven people have been snuffed out in the present case," the bench said, adding, "The most important thing that we consider is sentencing should be proportionate to the crime."

The bench was told by the lawyers for the convicts that they belong to a poor and uneducated background and moreover, they were first time criminals and hence be given an opportunity to reform.

It then referred to the sequence of events in the case and said the father of the woman convict was against her relationship with the co-convict and her lover and fights used to take place in the family on the issue.

In a pre-meditated manner the woman served the sedative-laced tea to all the seven family members and then her lover comes in the picture and inflicts fatal wounds on all of them by using an axe, the bench said.

"It is not the judge but the law that deals with a criminal. A judge, being a human being, cannot forgive a murderer. The law and the judge act for the society. Imagine a situation when a judge tells a murderer 'oh yes, I forgive you!'. Imagine the impact."

The solicitor general then mentioned the plea of Ministry of Home Affairs, which was filed on Wednesday, and said the Centre is seeking modification of the 2014 directions to ensure that a 7-day deadline is fixed for execution of condemned prisoners after issuance of the black warrant.

The apex court had upheld the death sentence of the two convicts who are natives of Amroha in UP, in 2015.

In 2010, the Allahabad high court upheld the death sentence awarded to the duo by a sessions court.

The Centre on Thursday mentioned for urgent hearing in the Supreme Court its plea seeking fixing of a seven-day deadline for execution of death penalty after the issuance of black warrant saying the condemned prisoners take 'judicial process for a ride'.

A bench of Chief Justice S A Bobde and Justices S A Nazeer and Sanjiv Khanna was told by Solicitor General Tushar Mehta that the plea of Ministry of Home Affairs (MHA) be taken up and the directions issued in 2014 in the Shatrughan Chauhan case, which was convict-centric, be modified and be made victim-centric.

"You argue this when your (MHA's) petition comes up for hearing," the bench told Mehta who was arguing on behalf of Uttar Pradesh government to oppose the review of two death row convicts.

The MHA plea said: 'All the guidelines provided... are accused-centric. These guidelines, however, do not take into account an irreparable mental trauma, agony, upheaval and derangement of the victims and their family members, the collective conscience of the nation and the deterrent effect which the capital punishment intends to make.'

It sought a direction 'to mandate all competent courts, state governments, prison authorities in country to issue death warrant of a convict within seven days of rejection of his mercy petition and to execute death sentence within 7 days thereafter irrespective of the stage of review petition/curative petition/mercy petition of his co-convicts'.

It has also sought a direction from the court that a time period be fixed for such death row convicts for filing curative pleas after rejection of their review pleas.

The ministry also sought a direction that if a death row convict wanted to file a mercy petition, it should be made mandatory for him to 'do so only within a period of seven days from the date of receipt of death warrant issued by the competent court'. 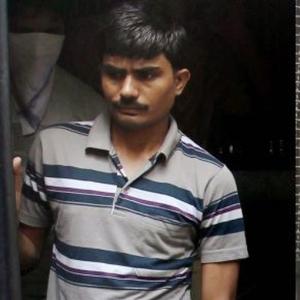