‘Trial and appeals for rape cases must end in a year. Then the police will not feel constrained to justify encounters and people will not applaud it.’

‘People are applauding the encounter because they have given up on the criminal justice system.' 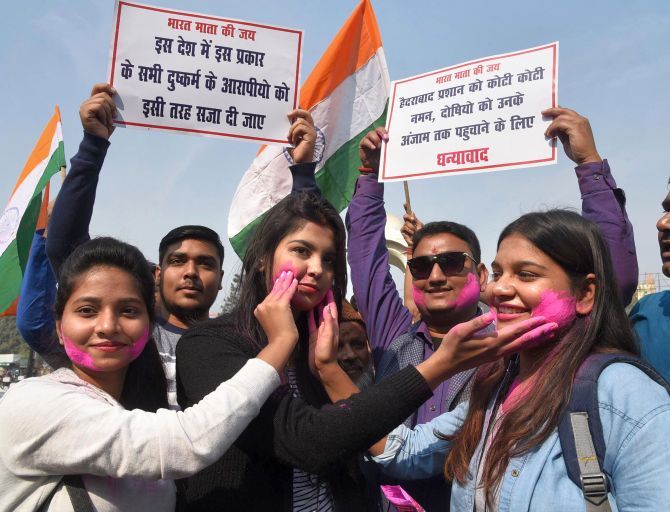 IMAGE: People celebrate after the four accused in the Hyderabad veterinarian's rape and murder case were killed by the police on December 6, 2019. Photograph: PTI Photo

Dr Meeran Chadha Borwankar is the first first woman police commissioner of Pune, and the first woman to head Mumbai’s crime branch. She retired in 2017 after 36 years of service, and is a former director general of police.

The only woman to witness the hangings of Pakistani terrorist Ajmal Kasab and prime accused in the 1993 Mumbai serial blasts Yakub Memon, Borwankar strikes a cautionary note on the Hyderabad police encounter of December 6, 2019, in which the four accused in the Hyderabad veterinarian's rape-murder were shot dead by the police.

In an interview to Rediff.com’s Archana Masih, Borwankar says the way out is investing more resources in recruiting policemen and increasing the number of courts.

"An encounter is an extra-judicial killing. Once you start, where will it end? It can spiral out of control. It has very serious adverse implications for the country and the criminal justice system," she says.

As an officer of the Indian Police Service with over 30 years of service, how did you receive the news of the Hyderabad police encounter of the four rape accused and the public endorsement of the killings?

These cases of rape in Hyderabad, Unnao and the incident where a girl dancing at a wedding was shot in the jaw -- are examples of how the condition of women in India continues to be terrible.

Women are still considered second class citizens who can be harassed, exploited, raped and murdered.

In this perspective, when I see that four rapists have been encountered by the Hyderabad police, I am able to understand the public applause and showering of rose petals at the police.

The reason people are applauding the encounter is because they have given up on the criminal justice system.

People are agitated that Nirbhaya’s accused are still alive seven years after her barbaric rape and death. Citizens are disgusted and distressed with the delays in trials and then the subsequent delays with the appeals in the high court and Supreme Court.

Against that background, when they look at the Hyderabad (police) action, they feel ‘ki kuch toh nyay mila’ (at least some element of justice has been done).

But as a police officer who had served in uniform, I am against police encounters. Though I understand the public sentiment, I would say that these are short cuts that should be avoided.

Serving and retired police officers have also applauded this encounter, so how will it impact policing in similar crimes?

I am on various IPS groups and I feel that less than 10% are applauding it, but there are several who agree with the action of the Hyderabad police.

They are also using the same argument as the public, that if you don’t take such action and let things be, it will lead to an increase in crime, and criminals will get emboldened.

But I would say that 90-95% officers in my groups feel that these bandit kind of remedies will not pay.

The impact of this action is that when there is an oral consent to such encounters, the question that arises is, where do they stop?

Today a rapist has been killed, tomorrow it could be for some other crime.

I remember when I was posted in Mumbai as the chief of the crime branch, builders had started using officers to give threats of encounters for land disputes. Once you start these short cuts, then where do you end?

An encounter is an extra-judicial killing. Once you start, where will it end? It can spiral out of control. It has very serious adverse implications for the country and the criminal justice system.

What can be done to improve the criminal justice system when it comes to rape cases?

Rape cases plus their appeals should be completed in one year. Victims and people must feel that justice has been done.

I was in an Uber yesterday and the driver was telling me that Ajmal Kassab was kept alive for six years despite killing so many innocents. He said that Kasab had mithai everyday in jail and one crore rupees was spent on his security each day. ‘Usko uda dena hi accha tha’ (he should have been killed instead), he said.

Citizens have lost their patience. They feel that such criminals are alive and kicking in jails. They also believe in rumours like that one about Kasab being fed biryani in jail and feel convicts are getting special treatment in jail.

All this causes distress and they lose total trust in law enforcement.

You say that cases pertaining to crimes against women must be completed in one year. How can the courts hasten the delivery of justice?

There should be no adjournments of these cases. Session courts hear 2-4 cases together.

Mr Julio Ribiero has also written about this and he is my predecessor by about 30 years. What used to happen then is that the trial used to start on Monday and end on Friday. So there was ample notice that your case is going to start on this day and the prosecutor, defence, police, all knew that these accused have to be presented in court.

The defence lawyer knew that for this week he needs to give full attention to the case. The hearing would take place Monday-Friday, and in another week the dictation about the verdict was out. The appeal up to the SC would finish in one year -- this was how it was about 30 years ago.

Today cases are being tried together and adjournments are given whenever defence or prosecution wants, which results in prolonging cases.

Special courts have hastened cases to some extent but then the cases remain pending in the high court and then the Supreme Court, after that mercy petitions remain pending with the President.

When I was prison chief I used to be aghast that a person who has been given a capital sentence 18-20 years ago was still around in the prison.

In the Hyderabad case, the family was sent from one thana to another to register the complaint. This apathy faced by a distraught citizens from the police is repeated time and again but still doesn’t change. Why?

A total overhaul of the thana system is needed. We are attending to the cosmetics. I did 30 years of police service and this attitude of sending people from one thana to another to register a complaint hasn’t ended.

The need for EQ (emotional quotient) is very essential for police personnel. They are so overworked that they have become insensitive.

The NHRC is now looking into the case. What is the process for such cases which are undertaken by NHRC?

I don’t think the NHRC will find anything different from what the police is saying. I don’t want to prejudge.

Will this encounter act as a deterrent?

Yes. This will make rapists fearful. All people I have met feel what happened was correct. But this is not the remedy.

What happens when society loses faith in courts?

People are dissatisfied with the courts and that is why they have voted for encounters. They are happy and applauding this, not realising that it is very dangerous.

The way out is that we invest more resources in recruiting more policemen and increasing the number of courts.

The trial of rape and serious murder cases must end within six months. The appeal at all levels must take another six months. That way there will be no need for encounters. The police will not feel constrained to justify encounters and people will not applaud it.

Investment of resources in the police and judicial systems will automatically lead to a disciplined and improved society. It will improve the atmosphere of the entire country. It will also have good consequences on the economy. 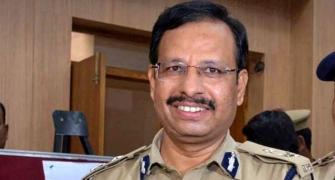 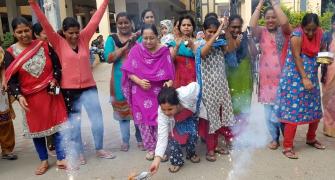