News
Business
Movies
Sports
Cricket
Get Ahead
Money Tips
Shopping
Sign in  |  Create a Rediffmail account
Rediff.com  » News » Jolt to Congress ahead of UP polls as Jitin Prasada joins BJP

Congress leader Jitin Prasada joined the Bharatiya Janata Party on Wednesday, in a boost to the saffron party as it works to strengthen its social coalition ahead of assembly elections in the politically crucial state of Uttar Pradesh early next year. 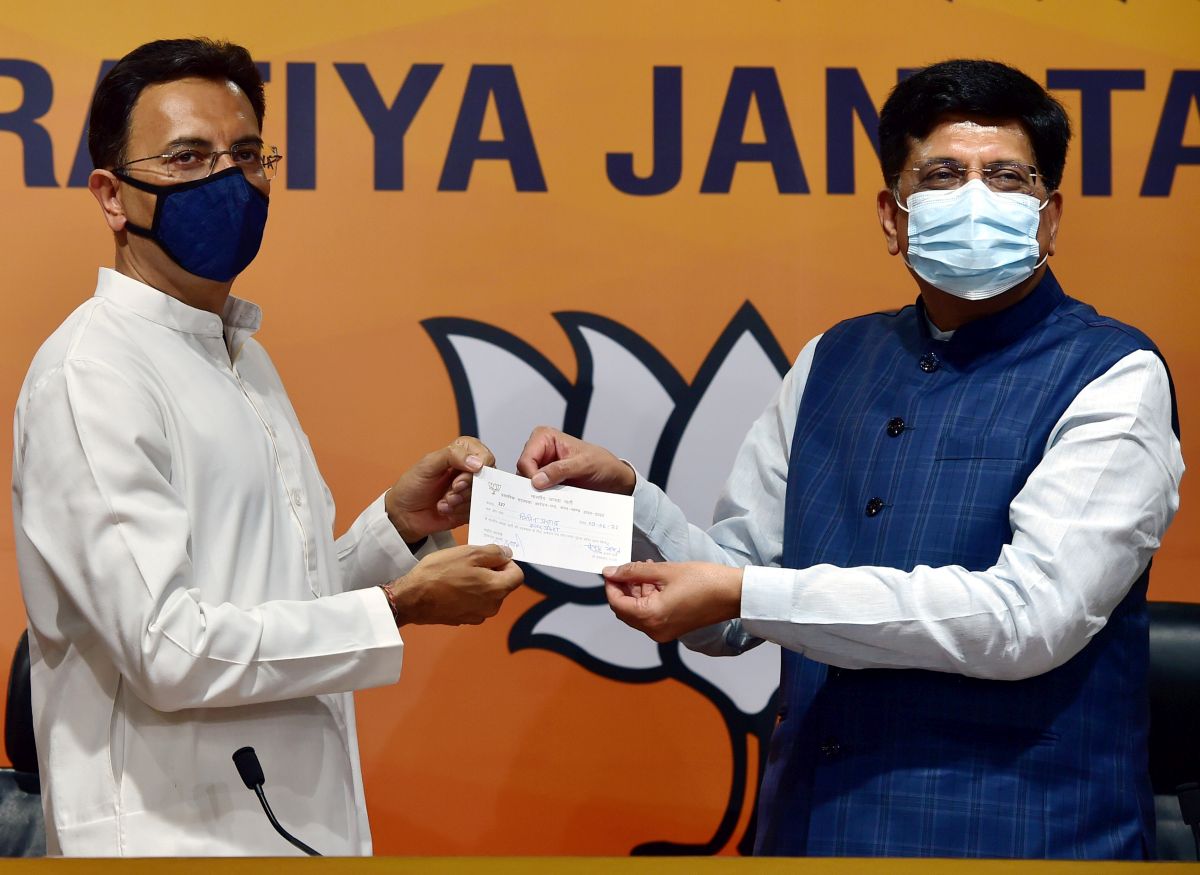 Other parties were either about personalities or confined to some particular regions, he said, echoing the BJP's criticism of its rivals like the Congress and several regional parties.

Prasada was part of the group of 23 leaders who had written to Congress chief Sonia Gandhi last October seeking organisational overhaul and elections at all levels, triggering a storm in the party.

The 47-year-old former Union minister, who comes from a well-known Brahmin family of Uttar Pradesh, refrained from attacking the Congress leadership but said he had realised that it was no longer possible for him to serve people and protect their interests while remaining in his former party.

Noting that his family had been associated with the Congress for three generations, he said he had reflected long before severing the ties, and asserted that it was not about which party he was quitting but which he was joining.

Prime Minister Narendra Modi is leading the country strongly and is the most capable person to confront the challenges facing the nation, he said, while also lauding other BJP leaders like Home Minister Amit Shah and its president J P Nadda.

A two-term Lok Sabha MP, he was the Congress leader in-charge of West Bengal before joining the BJP.

Son of Jitendra Prasada, a key Congress leader before his fortunes plunged following his decision to contest against Sonia Gandhi for the post of party president in 2000, his joining the BJP may help him politically at a time when the saffron party is working overtime to boost its ranks in preparation for the assembly polls.

His father had served at important political positions during the prime ministership of Rajiv Gandhi and P V Narasimha Rao, and had died months after losing to Sonia Gandhi by a massive margin.

With the Congress in dire straits in Uttar Pradesh and he himself losing Lok Sabha polls twice in a row besides an assembly election in between, Jitin Prasada saw little future for himself in the party and is likely to be accommodated in the state BJP or Chief Minister Yogi Adityanath-led government.

It will also help the BJP keep Brahmins, a section of whom are said to be unhappy with the party in Uttar Pradesh, in good humour in the politically most important state of India, party sources said.

Speculation was rife even during the 2019 Lok Sabha elections of Prasada joining the BJP, but it is believed that the Congress leadership had then managed to persuade him against quitting the party.

Inducting Prasada into the BJP, Goyal heaped praise on him, highlighted his education qualifications from institutions like the Doon School and Shri Ram College of Commerce besides his family history in public life and noted that he left a cushy job in Mumbai to 'serve' Uttar Pradesh at a young age of 27 after his father's sudden death in 2001.

Lauding him as a 'rooted leader' and politician of stature, Goyal said his joining the BJP will boost the party and also provide him an opportunity to serve people.

After the joining ceremony, Prasada met Nadda and Shah.

"I am confident that his joining the party will further strengthen the resolve of BJP for public service in Uttar Pradesh," Shah said.

The development marks another high-profile exit of a relatively young leader from the Congress into the BJP.

Once considered close to Rahul Gandhi, a bevy of young Congress leaders, including Sachin Pilot and Milind Deora, have been reportedly unhappy with the state of affairs in their party, with some of them joining the BJP.