Cong-JD-S govt fate likely to be decided on Monday

The fate of the fragile H D Kumaraswamy led Congress-Janata Dal-Secular coalition government in Karnataka is likely to be decided on the floor of the assembly on Monday after it defied on July 19 the two deadlines set by
Governor Vajubhai Vala to prove majority after the ministry was wracked by a raft of resignations by rebel MLAs. 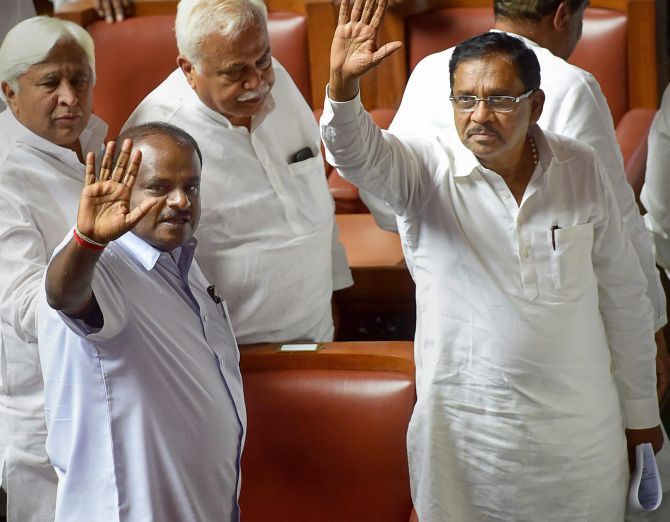 Amid reports that the government was still trying to prolong the discussion on the confidence motion moved by the chief minister on Thursday, hoping for some kind of relief from the Supreme Court, the ruling coalition was making last ditch efforts to win back unrelenting rebel lawmakers.

Kumaraswamy and the Congress had moved the Supreme Court on Friday, accusing the Governor of interfering with the assembly proceedings when the debate on the trust vote was underway and sought clarification on its July 17 order, which they said, caused hindrance in issuing whip to the legislators.

The assembly was adjourned till Monday after the governor's 1.30 pm deadline and the second one to conclude the confidence motion process by Friday itself was ignored, prolonging the climax to the ceaseless power struggle that has been on for the last three weeks and which threatens to blow into a constitutional crisis.

As the first deadline neared on Friday, the ruling coalition vociferously questioned the Governor's power to issue such a direction, with Kumaraswamy citing a Supreme Court verdict that a Governor cannot act as ombudsman of the legislature.

The Governor's second missive was dismissed as a "love letter" by Kumaraswamy, who criticised Vala for talking about horse-trading now "when it had been happening" for the last several days.

However, before adjourning the House on Friday, Speaker Ramesh Kumar extracted a "commitment" from the coalition that the motion of confidence would reach finality on Monday, even as he made it clear that it would not be prolonged further under any circumstances.

With discussion on the confidence motion yet to be completed after treasury benches insisted that Ramesh Kumar allow its long list of speakers to voice their feelings, questions are still being raised in political circles over whether voting on the confidence motion will happen on Monday also and whether the government will keep up its promise, by not delaying the process further.

If the ruling coalition tries to delay the proceedings on Monda, all eyes will be on the next move by the Governor, who has been keeping the Centre posted on the unfolding drama in the state.

According to sources, attempts were made in this regard, but it did not yield much results as rebel MLAs, claiming that 13 of them were together, have made it clear that they are firm on their resignation and there was no question of going back.

This firm decision by the rebels has made it increasingly difficult for the Congress-JD-S coalition to woo them back and get the requisite numbers to sail through in the assembly.

Bharatiya Janata Party state president B S Yeddyurappa on Sunday exuded faith that Monday would be the last day of the Kumaraswamy led coalition government.

"As Siddaramaiah, Speaker and Kumaraswamy have said that they will seek majority on Monday, I am 100 per cent confident that things will reach a conclusion.

“I am confident that tomorrow is the last day of the Kumaraswamy government," Yeddyurappa told reporters.

"The SC has clearly said in its order that under no circumstances should the 15 MLAs staying in Mumbai be compelled to attend the current assembly session.

“It has clearly stated that it is left to them (MLAs) whether they want to attend it or not," the former chief minister said.

He emphasised that the whip has no value in such a situation, which the ruling party leaders too know.

Meanwhile, BJP has left no stone unturned to keep its flock together ahead of the trust vote by herding its MLAs to a resort and has decided to wait and watch till Monday about the coalition and the Speaker's commitment to complete the
trust vote.

If the floor test is further delayed, it will worsen the political logjam, compelling the BJP to approach the Governor and even move the apex Court for intervention, party sources said.

On the CM failing to prove majority on the floor of the House during the trust vote on Monday, Kumaraswamy will have to tender the resignation, following which the procedure to form an alternative government will be kickstarted.

Yeddyurappa has already claimed that the Congress-JD-S coalition had just 98 legislators and it has lost majority, while the BJP led by him, with 106 MLAs ,was in a comfortable position to form an alternative government.

As many as 16 MLAs -- 13 from the Congress and three from JD-S -- had resigned, while independent MLAs R Shankar and H Nagesh have withdrawn their support to the coalition government, putting the government to the precipice.

If the resignations of 15 MLAs (12 from Congress and three from JD-S) are accepted or if they stay away, the ruling coalition's tally will plummet to 101, (excluding the Speaker) reducing the government to a minority.

The coalition strength would fall further to 98 as claimed by Yeddyurappa, as two Congress MLAs are unlikely to attend due to health reasons, while BSP MLA Mahesh, is not showing up, amid reports he was keeping away as he has not
received any directions from the party leader Mayawati on the stand to be taken on the trust vote.

BJP’s strength is also likely to come down to 106, as Shankar who has extended support to the saffron party will not attend the session, according to sources, fearing poaching by Congress as Speaker has not accepted his request for his
seating arrangement along with opposition. 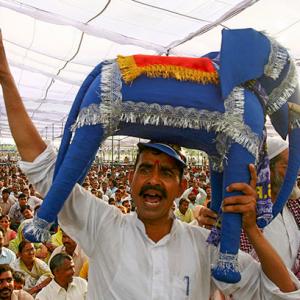