'We will fight and we will triumph.' 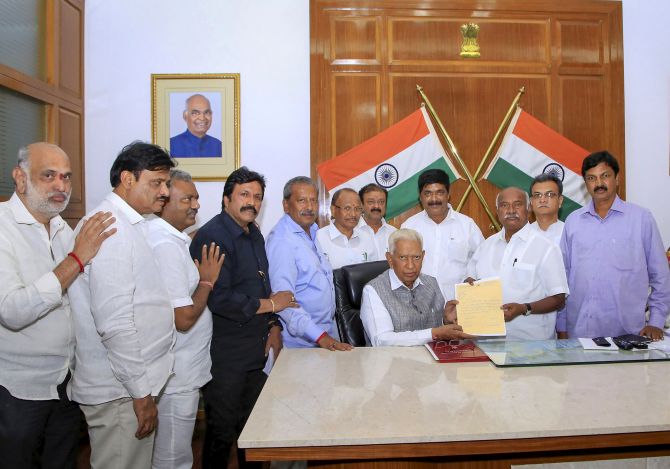 With this, 16 MLAs -- 13 from the Congress and 3 from the JD-S -- have quit while two Independent MLAs -- H Nagesh and R Shanker -- have already withdrawn support.

The development came even as the Supreme Court on Thursday, July 11, directed the speaker of the state assembly to take a decision on the Congress MLAs's decision to resign, and to communicate the same to the apex court on Friday.

If the resignations of the 16 MLAs are accepted, the strength of the assembly goes down from 224 to to 208 with the majority mark being 105. Post the resignations, the coalition's tally will be reduced to 100, giving Bharatiya Janata Party the upper hand.

The BJP has 105 MLAs, plus the support the two independent legislators who have ditched the Congress-JD-S to support it.

"After the Parliament election results many people are confused and this is why this crisis has erupted," the Congress's Rajya Sabha MP Rajeev Gowda tells Rediff.com's Syed Firdaus Ashraf.

I still believe the internal tensions in our party will be resolved.

These (Congress) MLAs will return to the party fold.

In the next day or two, things will surely be resolved.

What do you say about Congress leader D K Shivakumar's detention in Mumbai when he went to meet the rebel MLAs?

This act was deplorable and anti-democratic.

There was no logic for preventing D K Shivakumar from entering the (Renaissance) hotel in Mumbai and detaining him.

This act shows what the BJP (Bharatiya Janata Party) government is up to in terms of suppressing political activities.

Previous attempts to dismantle the Karnataka government were successfully foiled. But this time it looks like the alliance government is on the verge of collapse.

After the Parliament election results many people are confused and that is why this crisis has erupted. 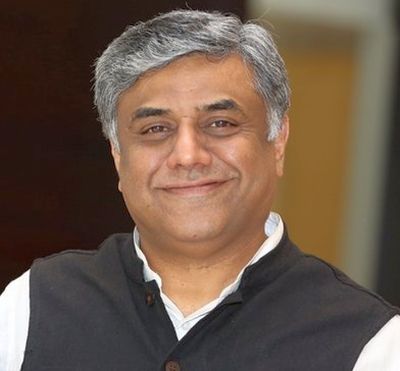 A week after the Lok Sabha election the Congress swept the Karnataka urban local body elections by winning 509 seats whereas the BJP won 366 seats. So why is there a crisis?

Exactly, that is my point.

There is no reason for any people to believe that what happened in the Parliament elections will happen in state elections.

We won a few states (Chhattisgarh, Madhya Pradesh and Rajasthan) before Parliament (elections), but still we lost those states in the (general) elections.

Therefore, there was no reason for MLAs to get panicked.

This is something that could have been avoided.

Do you think the tables would have turned by now if D K Shivakumar had met the rebel Congress MLAs?

Shivakumar is a very capable and persuasive man.

It was entirely possible that a compromise would have come out.

He would have addressed their concerns and solved them probably.

What are the options before the Congress-Janata Dal-Secular government to prove its majority?

The S R Bommai judgment says that the majority has to be proved on the floor of the house.

Do you think democracy is under threat in India after what happened in Karnataka and what is right now happening in Goa where 10 Congress MLAs have crossed over to the BJP?

Whatever the BJP tries, they will not be able to suppress democracy.

Right now they are able to do certain amount of damage, but the people have wisdom and political parties are also alive.

We will fight and we will triumph.