After the Chinese Army's attempts to occupy dormant heights in Southern Pangong Tso area were foiled by the Indian security forces, Indian agencies are keeping a close watch on their movements opposite other sectors, especially Arunachal Pradesh, where the People's Liberation Army (PLA) has been moving troops in the depth areas. "A strict vigil is being maintained in almost all the sectors with China from Ladakh to Arunachal Pradesh as the Chinese suffered a setback in the southern Pangong Tso area and may try to make fresh attempts to ingress into newer dormant areas," government sources told ANI.

In the Arunachal Pradesh sector, the Indian security forces have been keeping a close watch on Chinese military movements in the areas opposite the Asaphila area, and also opposite the Tuting axis and the Fish Tail-2 area, they said.

Sources said the movement of Chinese troops in their depth areas (around 20 km from LAC) has been seen in the last few days using the roads built by them in the area where they have built infrastructure through glaciated areas as well.

Looking at the Chinese activities in the area, the Indian side has also strengthened its positions on the LAC in all the sectors.

The Chinese Army patrols are also being seen regularly and are coming very close to Indian areas.

Sources say the top security brass of the country have also held discussions on the situation in and around the Doklam area in Bhutan where the Chinese Army has built up significantly in the recent past.

Sources said even though the Chinese side had agreed to hold the next round of Corps Commander-level talks, they have not yet confirmed the time and date for the meet and there has been no change on the ground since the meeting between the foreign ministers of the two countries.

The two countries have been engaged in a standoff position since April-May timeframe and the Chinese have refused to vacate areas in the Finger area and other friction points in the Eastern Ladakh area.

Multiple rounds of talks have also failed to yield any significant result in defusing the tensions and now the Indian side has prepared itself for long term deployment in the high mountainous region. 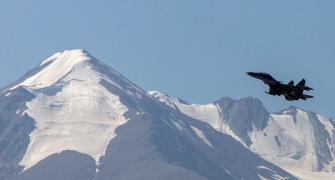