In the first signs of tensions easing, the Chinese military on Monday began a limited pull-back from a number of friction points in eastern Ladakh, a day after National Security Adviser Ajit Doval and Chinese Foreign Minister Wang Yi agreed on completing the ongoing disengagement process along the Lien of Actual Control 'expeditiously', government sources and officials said. 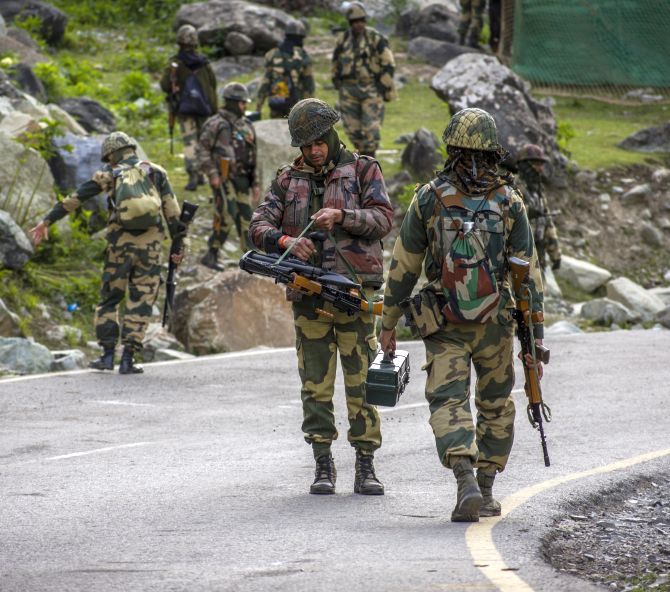 Doval and Wang, who are designated 'Special Representatives' on Sino-India boundary question, held a telephonic conversation on Sunday during which they had a 'frank and in-depth exchange' of views and agreed that a 'complete disengagement' of troops at the 'earliest' was necessary for full restoration of peace in the border areas, the Ministry of External Affairs said on Monday.

Government sources said Chinese troops removed tents and are pulling back by up to 1.5 km from the area around patrolling point 14 in the Galwan Valley besides starting rearward movement of vehicles and troops in Hot Springs and Gogra.

There were reports that Chinese troops have also removed some tents from areas around Finger 4 in Pangong Tso.

However, the sources said a clear picture will emerge only after a thorough verification is carried out.

Sources said the disengagement is taking place as per a decision arrived at during the military talks on June 30 that both sides will create a minimum buffer zone of 3 km in the area around Galwan river, and Indian troops are also moving accordingly.

The Indian Army will carry out a thorough verification of the Chinese pull back, said a source.

In the talks, Doval and Wang re-affirmed that both sides should 'strictly respect' and observe the Line of Actual Control (LAC) and should not take any unilateral action to alter the status quo, the MEA said.

The two special representatives agreed to continue their conversations to ensure 'full and enduring restoration' of peace and tranquillity in the India-China border areas.

They also emphasised on not allowing differences to become disputes between the two countries, government sources said.

In Beijing, the Chinese Foreign Ministry also issued a statement which said that Wang and Doval reached 'positive common understandings' over easing the current border situation, and underlined the need to act promptly on the consensus reached by their military commanders to complete the disengagement of the front-line troops at the LAC as soon as possible.

It was the first time that Doval and Wang held talks during the ongoing stand-off. The conversation is learnt to have lasted for around two hours.

Government sources said India is strictly monitoring whether China was withdrawing its troops from the friction points, adding that global support to New Delhi and Prime Minister Narendra Modi's strong message during his visit to Ladakh last week may have had some impact on Beijing agreeing to move back its army.

In sync with the mutual understanding, India is also likely to bring down the number of troops from certain face-off areas, sources added.

The MEA said Doval and Wang agreed to 'take guidance from the consensus of leaders' that maintenance of peace and tranquillity in border areas was essential for the further development of bilateral ties and that two sides should not allow differences to become disputes.

"Therefore, they agreed that it was necessary to ensure at the earliest complete disengagement of the troops along the LAC and de-escalation from India-China border areas for full restoration of peace and tranquillity," it said.

"In this regard they further agreed that both sides should complete the ongoing disengagement process along the LAC expeditiously. The two sides should also ensure a phased and stepwise de-escalation in the India-China border areas," the MEA added.

It was re-affirmed that both sides should 'strictly respect and observe' the LAC and should not take any unilateral action to alter the status quo, besides working together to avoid any incident in the future that could disturb peace and tranquillity in the border areas.

The MEA said the two special representatives agreed that the diplomatic and military officials should continue their discussions, including under the framework of the Working Mechanism for Consultation and Coordination on India-China border affairs, and implement the understandings reached in a timely manner.

It was also agreed that the two special representatives will continue their conversations to ensure full and enduring restoration of peace and tranquillity in the India-China border areas in accordance with the bilateral agreements and protocols, the MEA said.

The Indian and Chinese armies have been locked in a bitter standoff in multiple locations in eastern Ladakh for the last eight weeks.

The tension escalated manifold after the killing of 20 Indian soldiers in Galwan Valley.

In the talks on June 22, the two sides arrived at a 'mutual consensus' to 'disengage' from all the friction points in eastern Ladakh.

On Friday, Modi made a surprise visit to Ladakh during which he said the era of expansionism is over and that the history is proof that 'expansionists' have either lost or perished.

The comments were seen as a clear message to China that India is not going to back off and would deal with the situation with a firm hand. 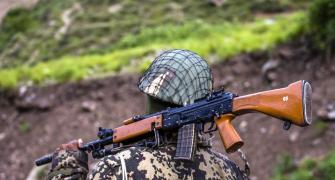