India on Thursday said China was hindering normal patrols by its troops along the Line of Actual Control in Ladakh and Sikkim and strongly rejected Beijing's allegations that Indian forces trespassed into the Chinese side. 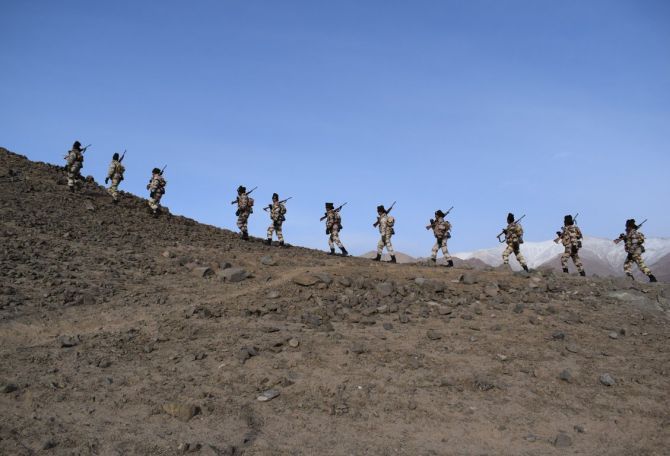 The Ministry of External Affairs said all Indian activities have been carried out on its side of the border and that India has always taken a very responsible approach towards border management.

At the same time, it said India was deeply committed to protect its sovereignty and security.

Several areas in Ladakh and North Sikkim witnessed major military build-up by both the Indian and Chinese in the last few days, in a clear signal of escalating tension and hardening of respective positions by the two sides even two weeks after they were engaged in two separate face-offs.

On Tuesday, China accused the Indian Army of trespassing into its territory, claiming that it was an 'attempt to unilaterally change the status' of the Line of Actual Control (LAC) in Sikkim and Ladakh.

"Any suggestion that Indian troops had undertaken activity across the LAC in the Western sector or the Sikkim sector is not accurate. Indian troops are fully familiar with the alignment of the Line of Actual Control in the India-China border areas and abide by it scrupulously," MEA Spokesperson Anurag Srivastava said at an online media briefing.

He said all Indian activities were entirely on the Indian side of the LAC.

"In fact, it is Chinese side that has recently undertaken activity hindering India's normal patrolling patterns. Indian side has always taken a very responsible approach towards border management," Srivastava said.

"At the same time, we are deeply committed to ensuring India's sovereignty and security.

The Indian troops strictly follow the procedures laid down in various bilateral agreements and protocols to resolve any situations which may arise due to difference in perception of LAC," he said.

Without elaborating, the MEA spokesperson said both sides were engaged to address any immediate issue.

"The two sides have established mechanisms to resolve such situations peacefully through dialogue. Both sides remain engaged with each other to address any immediate issues," he said.

In the midst of the escalating tension between the two ides, the United States on Wednesday said the latest border dispute in Ladakh was a reminder of the threat posed by China.

China on Thursday dismissed as 'nonsense' the comments by Alice Wells, the outgoing head of the South and Central Asia bureau in the US State Department.

It is learnt that local commanders of both the sides held at least three meetings in the last couple of days to bring down the tension but there was no positive outcome from the exchanges.

Sources said a top official in the government was in touch with Beijing as both sides were attempting to resolve the issue.

"In accordance with the consensus reached in Chennai, Indian side remains firmly committed to work for the common objective of maintenance of peace and tranquillity in border areas.

"This is an essential prerequisite to the further development of Indian-China bilateral relations," said Srivastava.

Sources said the Chinese troops significantly increased their presence in areas around Pangong Tso Lake and Galwan Valley and even brought in sizable number of additional boats to the lake.

The two sides also have brought in additional troops to locations like Demchok and Daulat Beg Oldie, the sources said

The sources said the Chinese side has erected at least 40-50 tents in the Galwan Valley area following which India has also sent reinforcements to keep a hawk-eye vigil in the area.

The sources said the Chinese side had taken strong exception to India undertaking construction of key road around the Galwan river. India maintains that the area where the road and a bridge were being constructed belonged to the Indian side.

On May 5, around 250 Indian and Chinese army personnel clashed with iron rods, sticks, and even resorted to stone-pelting in the Pangong Tso lake area in which soldiers on both sides sustained injuries.

The India-China border dispute covers the 3,488-km-long Line of Actual Control, the de facto border between the two countries. 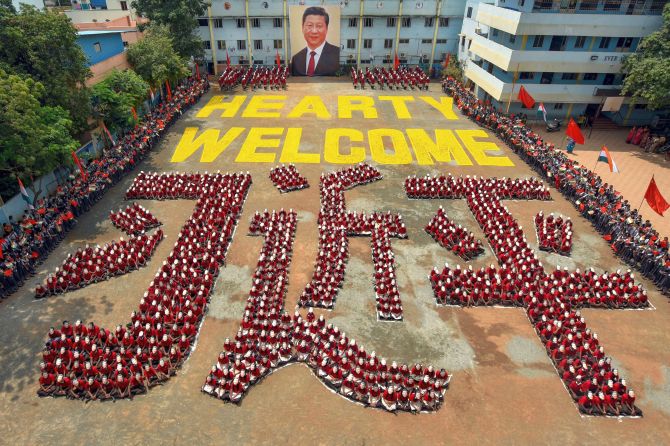