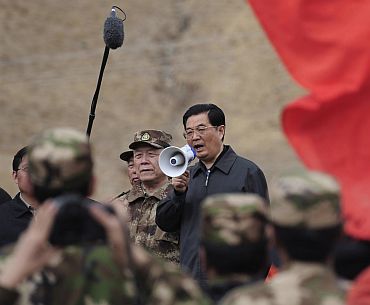 "There will be new schools! There will be new homes!," wrote Chinese President Hu Jintao on the blackboard of a makeshift classroom in Qinghai, as he visited the quake-devastated region where the death toll in last week's 7.1 temblor mounted to 1,706 on Sunday.

As the death toll neared 2,000 in the Tibetan-dominated province, as many as 256 persons still remained missing on the fifth day after the quake that razed many buildings to the ground.

"There will be new schools! There will be new homes!", Hu Jintao wrote on the blackboard while visiting a makeshift classroom being run from a tent for orphaned students in the quake hit town Yushu.

Hu then led the students to read aloud the words he wrote on the blackboard. The President, also General Secretary of the Communist Party of China, who cut short his tour to the BRIC summit at Brasilia in the wake of the national tragedy, was seen on the state television surrounded by heavy security personnel.

While promising to rebuild the schools and homes, Hu also asked rescuers to continue searching for survivors.

"Rescuing those people who are trapped is still the main task. We must treasure each life," Hu said after meeting survivors in a village.

Prime Minister Wen Jiabao had visited the region on Thursday and Friday goading the relief teams to step up rescue efforts to save people buried under the rubble before '72-hour golden period' ended.

Rescue headquarters announced that an estimated 17,000 people have been saved from the rubble. The quake has left 12,128 persons injured, of which 1,424 are in severe condition, Miao Chonggang, deputy head of the China Earthquake Administration's quake relief and emergency response department, told mediapersons in Beijing on Sunday.

Miao said currently more than 15,000 rescuers, including over 11,000 from the People's Liberation Army and armed police were conducting the relief operations.

Considering that the quake hit province which is located adjacent to Tibet, officials promised to take into consideration religious as well the food habits dealing with the quake affected people.

As mass funerals were conducted for hundreds of bodies yesterday with the help of Buddhist monks, officials said the government has taken into consideration the diet habits and needs in practicing religious service among people from minority ethnic groups in relief work in the quake zone.

"Now quake-affected people could practice religious activities in all the 14 shelter centers in the worst-hit Gyegu Town and its surrounding areas in Yushu," Zou said.

The government also enrolled 1484 Tibetan students to use them as interpreters as the bulk of the rescue teams and medical staff are the mainland Hans, speaking Mandarin. Meanwhile, an official survey said the quake affected an area of about 30,000 square kms and a population of 100,000.

The earthquake has wreaked havoc in 12 villages and townships in the counties of Yushu and Chengduo, Miao Chonggang, deputy head of the emergency response department at the China Earthquake Administration said.

The hardest-hit zone has an area of 900 square kilometers while a zone of 4,000 square kilometers was struck badly. The epicenter depth has been modified to 14 km from the previous estimate of 33 km. "The revisions doesn't affect the relief work and relevant decision making," Miao said.