China has begun construction of over 100 new silos for intercontinental ballistic missiles in a desert near the country's northwestern city of Yumen, signalling a major expansion of its nuclear capabilities, a leading American daily has reported citing satellite imagery. 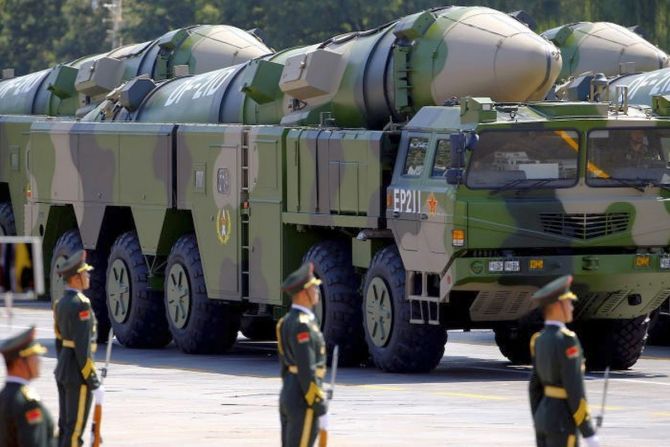 The silo construction project could provide China -- which celebrated its 100th anniversary on Thursday at the Tiananmen Square -- a means of concealing its nuclear weapons, The Washington Post reported on Thursday.

The 119 nearly identical construction sites, that could potentially house powerful weapons capable of reaching the American mainland, are similar to those seen at existing launch facilities for China's arsenal of nuclear-tipped ballistic missiles, the report said.

It said that commercial satellite images obtained by researchers at the James Martin Center for Nonproliferation Studies in California show work underway at scores of sites across a grid covering hundreds of square miles of arid terrain in Gansu province, some 2,100 km from Beijing.

The acquisition of over 100 new missile silos, if completed, would represent a historic shift for China, a country that is believed to possess a stockpile of 250 to 350 nuclear weapons, the report said.

The actual number of new missiles intended for those silos is unknown but could be much smaller. China has deployed decoy silos in the past.

The construction suggests a major effort to bolster the credibility of China's nuclear deterrent, said researcher Jeffrey Lewis, an expert on China's nuclear arsenal and part of a team that analysed the suspicious sites, first spotted by colleague Decker Eveleth as he scoured photos taken by commercial satellites over northwestern China.

Lewis described the scale of the building spree as “incredible.”

“We believe China is expanding its nuclear forces in part to maintain a deterrent that can survive a US first strike in sufficient numbers to defeat US missile defences,” he said.

The discovery of over 100 silos follows recent warnings by Pentagon officials about China's rapid advances in nuclear capability.

Admiral Charles Richard, who commands US nuclear forces, said during a congressional hearing in April that a “breathtaking expansion” was underway in China, including an expanding arsenal of Intercontinental Ballistic Missile (ICBMs) and new mobile missile launchers that can be easily hidden from satellites.

Lewis said the silos are probably intended for a Chinese ICBM known as the DF-41, which can carry multiple warheads and reach targets as far away as 9,300 miles, potentially putting the US mainland within its reach.

Major excavation work on the sites began early this year, although preparations were probably underway for months, Lewis said.

Emails and faxes seeking comment from China's Foreign Ministry in Beijing and the Chinese Embassy in Washington did not receive a response, The Washington Post said.

However, China's state-run Global Times newspaper on Friday pointed out that the US has repeatedly raised these issues based on speculative information.

"Their purpose is obvious: to exert public opinion pressure on China's nuclear deterrence building and force China to respond to their speculation.

They aim to hamper China's nuclear capacity building by making an issue of it and putting China in a passive position to defend itself," it said.

It is unknown whether The Washington Post report corresponds to the real situation, the Global Times commented.

"But generally speaking, silos are normally used for liquid-fuel intercontinental missiles. Such missiles are high-thrust and long-range, and could carry higher-yield nuclear warheads.

"Silos provide good conditions for the storage and maintenance of missiles and are able to shorten launch time under emergency situations.

However, Lewis assumed that the "silos" in Gansu are intended for DF-41 intercontinental ballistic missiles.

In reality, DF-41 is solid-fueled and is loaded on high-mobility launcher vehicles. The necessity of putting it inside a silo is questionable.

"Therefore, the latest accusations by The Washington Post and the US State Department over China cannot hold water," it commented.

Meanwhile, the Editorial Board of The Washington Post said that the report that China is building 100 or more silos for intercontinental ballistic missiles that can reach the United States marks a concerning waypoint in China's expansion and modernisation of its nuclear forces.

"If missiles are deployed in the new silos, they would represent a blossoming arms race that is a serious challenge to the Biden administration, already facing competition from Beijing across many fronts.

The new silos make more urgent the start of negotiations with China on strategic nuclear arms control," The Post said in an opinion piece.

"The signs of an accelerating competition are clear, and talks at the outset could encompass nuclear crisis management, new-generation weapons such as hypersonic gliders and anti-satellite weapons, as well as thorny older issues like missile defences and nuclear testing," it added.

Source: PTI  -  Edited By: Hemant Waje© Copyright 2022 PTI. All rights reserved. Republication or redistribution of PTI content, including by framing or similar means, is expressly prohibited without the prior written consent.
Related News: China, Editorial Board of The Washington Post, Jeffrey Lewis, James Martin Center for Nonproliferation Studies, DF-41
Print this article 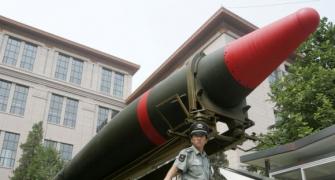 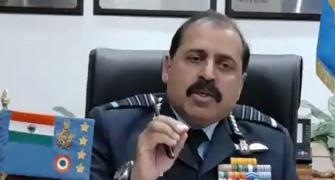 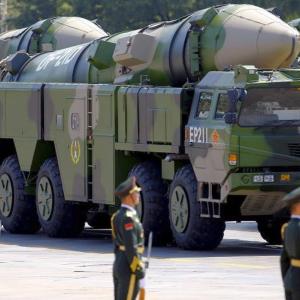