Chinese President Xi Jinping on Friday described the China-Pakistan Economic Corridor as a "landmark project" under the Belt and Road Initiative and said it is of great importance to promoting in-depth development of the all-weather strategic cooperative partnership between the two countries. 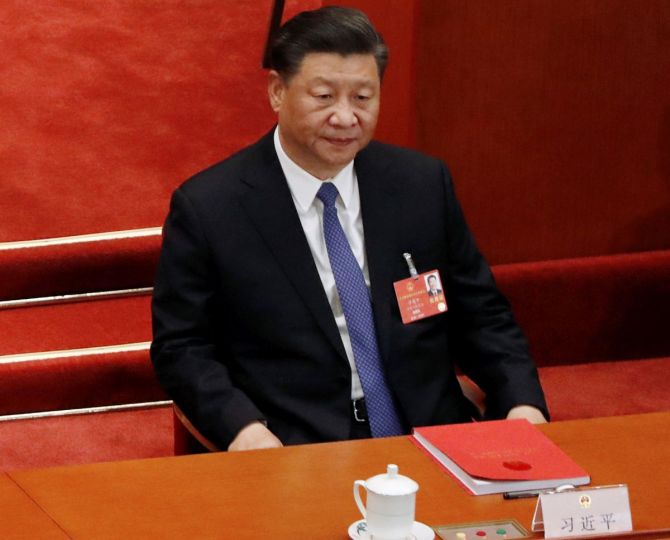 IMAGE: Chinese President Xi Jinping attends the closing session of the National People's Congress at the Great Hall of the People in Beijing. Photograph: Reuters

Replying to a congratulatory letter sent by the Pakistani president to the opening of the Second Conference of the CPEC Political Parties Joint Consultation Mechanism, Xi said that it fully demonstrated that Alvi attaches great importance to and supports the China-Pakistan relationship and construction of the CPEC.

India has objected to the CPEC as it is being laid through Pakistan-occupied Kashmir.

In his message to Alvi, Xi said China and Pakistan are good brothers and partners who share special friendship.

The political parties from both sides often carry out friendly consultations and constantly build political consensus, which is conducive to steadily advancing the construction of the CPEC as well as high-quality Belt and Road cooperation, he said.

China stands ready to work with Pakistan to build a closer China-Pakistan community with a shared future, jointly promote regional solidarity and cooperation, and safeguard the good momentum of peace and development in the region, the Chinese president said.