Chargesheets filed in 361 Delhi riots cases out of 758: HC told

The Delhi high court on Thursday directed the Delhi Police to file a detailed affidavit giving the latest status of criminal cases arising from the riots that broke out in the national capital in 2020. The latest update of the cases pending before the trial courts were sought by a bench headed by Chief Justice DN Patel after it was informed that as on October 4, chargessheets have been filed in 361 out of 758 cases and charges have been framed in 67 of them.

The bench, also comprising Justice Jyoti Singh, was hearing a batch of petitions concerning the last year's violence and alleged hate speeches by leaders which led to violence in the backdrop of protests against the Citizenship (Amendment) Act.

“We direct the respondent (Delhi Police) to file a further detailed affidavit giving details of cases pending before the trial courts,” the court stated as it noted the present affidavit was not on its record and posted the next hearing on January 28.

In its affidavit filed in October, the investigating agency said that while charges are yet to be framed in 287 cases, 4 FIRs have been quashed by the high court.

The Delhi police informed that the legal process in all pending cases is at an advanced stage and while two cases have resulted in the discharge of accused persons, one has witnessed acquittal.

“Out of 758 cases registered, 695 cases are being investigated by North-East District police. 62 cases that pertained to major incidents like murders etc were transferred to the Crime Branch, which had undertaken an investigation in the said cases by employing 3 dedicated Special Investigating Teams, being continuously monitored by the superior officers. One case of larger conspiracy behind the engineering of the communal riots in Delhi is being investigated in Special Cell,” the affidavit stated.

The October affidavit claimed that all cases are investigated promptly, diligently, fairly, and in accordance with the law and that there is no ground to transfer the cases to a fresh SIT.

The court is seized of several petitions including a plea which has alleged that Congress leaders, including Rahul Gandhi, Sonia Gandhi, and Priyanka Gandhi Vadra, as well as AAP leaders Manish Sisodia and Amanatullah Khan, and AIMIM MLA Waris Pathan gave hate speeches.

The court has also been hearing a PIL by Delhi resident Ajay Gautam seeking an National Investigation Agency probe under the UAPA (The Unlawful Activities (Prevention) Act) law into the violence.

The petition has urged the court to direct the Centre to order the National Investigation Agency to find out the "anti-national forces" behind the agitations and to probe the role of People's Front of India (PFI) which is allegedly "funding, motivating and supporting the protests".

Apart from seeking action against those who allegedly gave the hate speeches, some pleas have also sought other reliefs, which include setting up of an SIT, FIRs against police officers who were allegedly involved in the violence, and disclosure of persons arrested and detained.

In its response to these prayers, police had earlier said it had already created three special investigation teams under the crime branch and there was no evidence till now that its officers were involved in the violence.

It had added that the families of people arrested and detained in connection with the riots had been informed.

The police, in its affidavit earlier, had said that investigations into the northeast Delhi riots have not revealed any evidence till now that political leaders instigated or participated in the violence.

It had said that it "acted promptly, vigilantly and effectively without any fear or favour as a result of which violence could be contained in a few days and could be confined to a limited area".

It had said its prima facie investigations revealed that this was not a case of any sporadic or spontaneous violence "but appears to be a part of a well thought of conspiracy to destabilise the harmony in the society".

The police had said the investigation conducted so far "is pointing towards a wider and a larger conspiracy and concerted attempts of disrupting law and order situation in the national capital territory of Delhi through violent means by disrupting communal harmony in the state and to perpetuate chaos in the society." 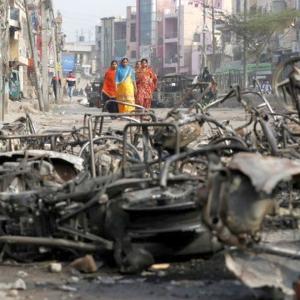 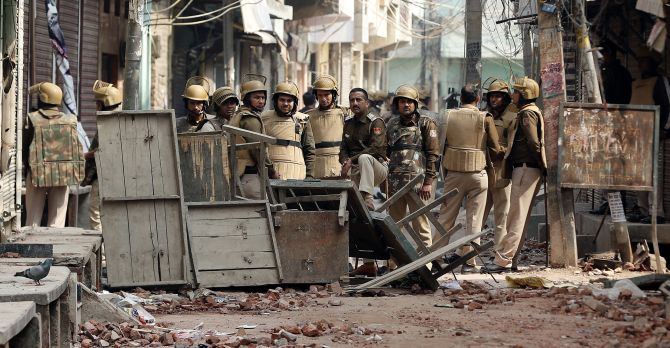