The accused persons in the recent Delhi riots allegedly committed a 'crime against humanity' carried out in an 'extremely brutal', 'grotesque' and 'dastardly' manner, police has said in its supplementary chargesheet filed in a case in a court. The chargesheet, which names former Jawaharlal Nehru University student leader Umar Khalid and JNU student Sharjeel Imam as accused, said there was a 'tacit understanding' between the accused persons to carry out an 'illegal' act.

It stated that by a 'sustained and well-oiled' campaign, they created an acute sense of fear and insecurity in the minds of the minority community.

"All the accused persons came together in pursuit of an unlawful object. The offences have been committed by the accused persons in an extremely brutal, grotesque and dastardly manner. Innocent victims and helpless were targeted of this ghastly, horrendous and horrifying crime. Precious lives were lost. Accused persons are chargesheeted for commission of grave, serious and heinous offences.

"It is pertinent to mention here that their acts and commissions have shocked the collective conscience of the society. The accused persons' conduct exhibits total disregard for human values and shows a totally depraved, brutal and scheming mind. The accused persons have committed a crime against humanity," police claimed in the chargesheet filed on Sunday.

It further said that the criminal conspiracy was continuing and has suffered setbacks with the exposure and arrest of the accused persons but it was neither aborted nor abandoned.

The chargesheet said the brunt of the conspiracy was suffered by those who reside in most densely populated district of India where day to day survival requires blood and sweat of the toiler and the breadwinner.

"With the leaders choosing to either remain safely glued to their television sets in the comfort of their homes in upscale locations of Delhi-NCR using their communication devices as the weapon of the enlightened or leaving Delhi for outside destinations to create the most acceptable alibi, the brunt of the conspiracy was suffered by those who reside in most densely populated district of India where day to day survival requires blood and sweat of the toiler and the breadwinner. The crime committed by the key conspirators is not just legally but morally reprehensible," it said.

It alleged the chargesheeted accused had entered into a deep rooted and sinister conspiracy to do an illegal act with an objective to disturb societal harmony by their terrorist acts.

"By a sustained and well oiled campaign, they created an acute sense of fear and insecurity in the minds of the minority community. Innocent people were killed as a result of this cold blooded, brutal, gruesome and diabolical conspiracy. Government and private properties were damaged, destroyed and destructed.

"The law and order situation was paralysed, essential services became unavailable and rumours and disinformation became the order of the day as desired by the accused persons who were acting in a systematic, structured and organised manner," the chargesheet said.

Communal violence had broken out in northeast Delhi on February 24 after clashes between citizenship law supporters and protesters spiralled out of control leaving at least 53 people dead and around 200 injured. 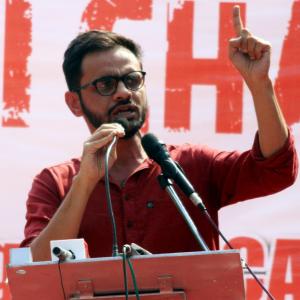