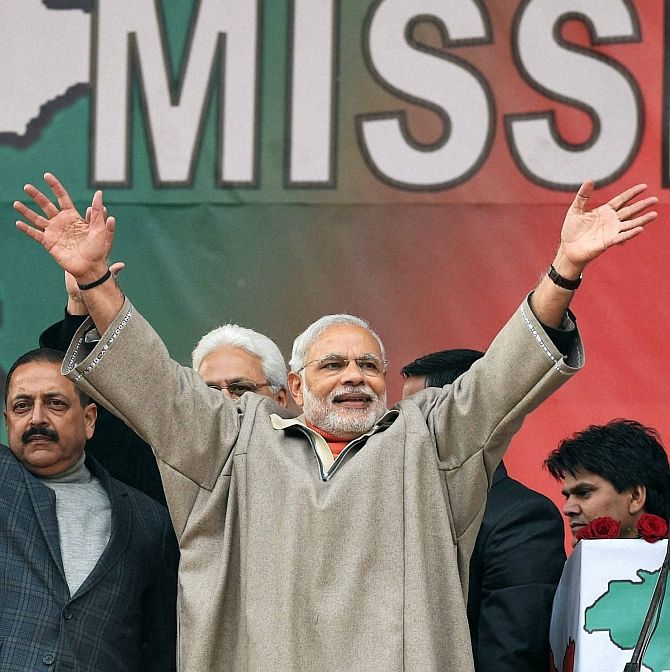 The Centre has released nearly Rs 20,000 crore of the Rs 80,000-crore development package for Jammu and Kashmir announced by Prime Minister Narendra Modi.

This was disclosed at a high-level inter-ministerial meeting chaired by Home Minister Rajnath Singh in New Delhi on Thursday.

Out of Rs 80,068 crore outlay of the Prime Minister's Development Project, Rs 61,112 crore has already been sanctioned by various ministries, which is more than 75 per cent of the total amount.

Rs 19,961 crore has already been released to the implementing agencies, including the state government, which is more than 25 per cent of the total amount, an official release said.

Singh reviewed the progress in implementation of the mega package and works of various development initiatives announced for Jammu and Kashmir, which has been witnessing unrest lately.

The successful implementation of the mega package is key to assuage the feeling of alienation in Jammu and Kashmir, an official said.

Jammu and Kashmir had witnessed violence during the April 9 bypoll to the Srinagar Lok Sabha seats in which eight people lost their lives in more than 200 incidents.

There have been protests by students in the Valley last fortnight against alleged police excesses. Students, including girls, were seen pelting stones on security personnel in these incidents.

Massive protests erupted in Kashmir after the death of Hizbul Mujahideen militant Burhan Wani in an encounter in July last year which continued for nearly four months. More than 90 people lost their lives, while scores of security personnel and civilians were injured.

The home minister asked the team of the central and the state government officials to further accelerate the implementation of PMDP with definite timelines so that the people of the state are able to reap the benefits of these development initiatives.

The meeting was attended by representatives from various central ministries and departments, and the state government.

The package consists of 63 projects concerning 15 ministries and has an outlay of Rs 80,068 crore.

The PMDP will provide a major development push for Jammu and Kashmir with projects such as AIIMS for Jammu and Srinagar, support for district as well as sub-district hospitals and primary health centres, IIM at Jammu with an out campus at Srinagar, IIT, upgrading of NIT at Srinagar and additional girls' hostels in higher educational institutions.

The central government has also approved providing 1,00,000 jobs for undergraduates and school dropouts under HIMAYAT scheme, an elaborate layout for sports infrastructure in all the 22 districts, development of pashmina wool, cold storage facilities for agricultural produce and development of horticulture.

The package includes a major support to urban development under AMRUT scheme, swachh bharat mission and smart cities. Major water resources projects include flood management of river Jhelum and its tributaries, conservation of major water bodies such as Dal, Nageen and Wular lakes.

As many as 18 major road transport and tunnel projects under PMDP are expected to provide much better connectivity for the people of the state and allow the farmers to transport their produce to the desired markets.

Three Himalayan circuits have been sanctioned under tourism that include extensive development in all the three regions i.e Jammu, Kashmir and Ladakh, under the tourism front also.

There are five major power projects which include Srinagar-Leh transmission line, smart grid and smart meters and augmentation of electricity distribution systems.

In addition, approval has been given for semi ring roads for Jammu and Srinagar and hydro and solar power projects.

These projects are in various stages of implementation. While work has started on many projects, in some cases detailed project reports are in final stages of preparation and in a few difficult cases, the DPRs are under preparation.

Nearly 87 DPRs are being finalised for small hydro projects.