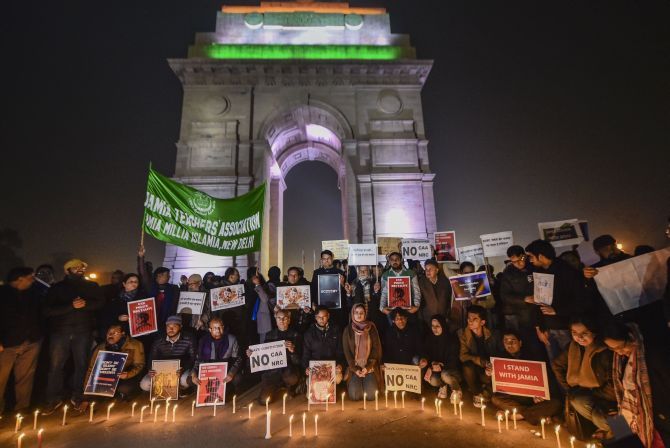 Around 140 people were detained on Monday as fresh protests by students and activists against the amended citizenship law erupted in several parts of the national capital, even as police stepped up vigil to maintain the law and order situation ahead of Christmas and New Year celebrations.

Protests were held outside the Uttar Pradesh Bhawan, Rajghat, India Gate, Jamia Millia Islamia (JMI), Assam Bhawan and Delhi University where people voiced their opposition to the controversial changes introduced in the law.

At the Rajghat in New Delhi, the top Congress leadership led by party chief Sonia Gandhi sat on a 'Satyagraha for Unity' demanding protection of the rights of people as enshrined in the Constitution.

Top Congress leaders, including former prime minister Manmohan Singh, former party chief Rahul Gandhi and general secretary Priyanka Gandhi Vadra, participated in the 'Satyagraha' which was also meant to express solidarity with the youth and students protesting against the amended Citizenship Act and the proposed countrywide NRC as well as against the police 'atrocities' on them.

Earlier in the day, students of Jawaharlal Nehru University, Delhi University and other universities tried to demonstrate outside the UP Bhawan against the police's action in the state, but were detained before they could reach the protest venue.

As many as 46 students, who were demanding the resignation of Uttar Pradesh Chief Minister Yogi Adityanath over the issue, were detained and taken to Mandir Marg police station.

The protest at the Jamia Millia Islamia entered its eight day on Monday, with hundreds continuing to throng the streets outside the university.

Students from several schools in Noornagar, Batla House and Okhla also attended the protests on Monday.

In the evening, teachers and research scholars from JMI also took out a candle march at the India Gate, seeking rollback of amendments made in the citizenship law.

Reacting to Prime Minister Narendra Modi's remark that no discussion has been held so far on implementing the National Register of Citizens (NCR) across the country, Majid Jamil, the secretary of the teachers association, said, "Home Minister has said in Parliament clearly -- now it is CAA and next NRC. We believe it is going to come."

As the national capital has been witnessing multiple protests against the contentious law during which violence erupted in New Friends Colony, Seelampur, Seemapuri, Daryaganj and Jamia for the last few days, the Delhi Police has stepped up vigil to prevent any violent protest in the city.

"We have stepped our vigil to maintain law and order situation in the national capital ahead of Christmas and New Year celebrations. Heavy police deployment will remain in place in sensitive areas identified by the police," a police officer said.

He said police personnel have been holding regular meetings with local people in violence-hit areas to maintain peace there.

Prohibitory orders under CrPC section 144 have already been imposed in two police stations of northeast Delhi, including Seelampur and Jafrabad, for one month, a rule that restricts the assembly of more than four people at one place.

93 students, including 52 women, were detained from outside Assam Bhawan on Monday when they were protesting against the amended citizenship act.

They were demanding the release of RTI activist Akhil Gogoi who was arrested amid violent protests against CAA across Assam.

Those detained were taken to the Mandir Marg police station, police said.

Meanwhile, an alliance of civil society organizations and activists demanded that the government launch a high-level judicial inquiry into alleged police excesses against the students of Jamia Millia Islamia and Aligarh Muslim University.

Addressing a press conference here, members of the alliance also demanded that all cases registered against those protesting the amended citizenship law be 'unconditionally' withdrawn and those arrested be immediately released.

Traffic was also affected on the roads leading to protest venues due to demonstrations.

Among the areas where traffic was disturbed include Delhi Gate, Daryagang, Rajghat, Mata Mandir Marg and Jamia Nagar area.

On Friday, angry protesters set a car on fire, damaged several vehicles and resorted to stone-pelting near the Delhi Gate area after police personnel baton-charged them and used water cannons to disperse the crowd.

Earlier in the week, violence also erupted in Northeast Delhi's Seelampur, Jafrabad and Southeast Delhi's New Friends Colony and Jamia during which several vehicles were set on fire and public property damaged.