The top Congress leadership, led by party chief Sonia Gandhi, sat on a 'Satyagraha for Unity' at Mahatma Gandhi's memorial Rajghat in New Delhi on Monday, demanding protection of the rights of people as enshrined in the Constitution. 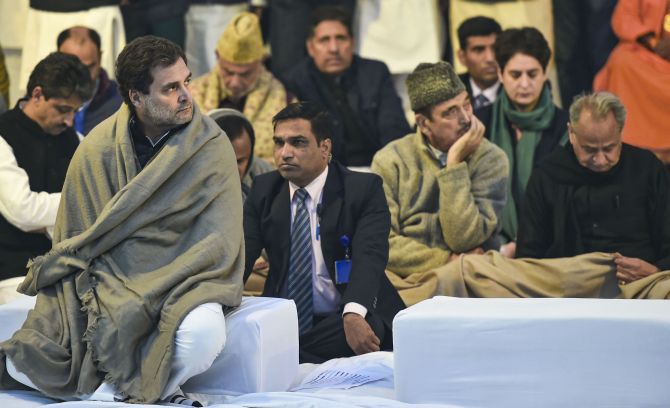 IMAGE: Congress leader Rahul Gandhi during a Satyagraha demanding protection for the Constitution in the view of CAA and NRC, at Mahatma Gandhi's samadhi Rajghat in New Delhi, on Monday. Photograph: Arun Sharma/PTI Photo

Top Congress leaders, including former prime minister Manmohan Singh, former party chief Rahul Gandhi and general secretary Priyanka Gandhi Vadra, participated in the 'Satyagraha', which was also meant to express solidarity with the youth and students protesting against the amended Citizenship (Amendment) Act (CAA) and the proposed countrywide National Register of Citizens as well as against the police 'atrocities' on them.

Sonia Gandhi, Manmohan Singh and Rahul Gandhi read out the Preamble to the Constitution of India as part of the 'Satyagraha' protest.

The party members also observed a one-minute silence in support of their cause and against the Bharatiya Janata Party-led government's policies.

Sonia Gandhi, however, was not present throughout the protest and left after about an hour.

Rahul Gandhi launched a scathing attack on Prime Minister Narendra Modi at the party's Rajghat protest, accusing him of spreading hatred and breaking the country, while warning that the people will not let him suppress the voice of 'Bharat Mata' or attack the Constitution.

Gandhi said Modi's organisation had taught him how to break the country and spread hatred for years. 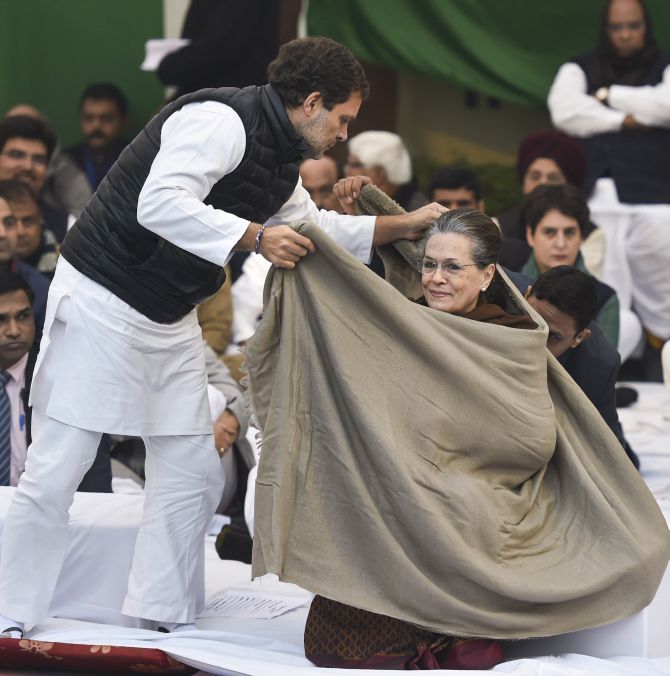 IMAGE: Rahul wraps a shawl around his mother and party president Sonia Gandhi as other leaders look on during the Satyagraha. Photograph: Arun Sharma/PTI Photo

"The people of the country, this voice of 'Bharat Mata' will not allow you to attack the country and not allow this country to be divided," he said .

He said Modi should tell the country 'why he was suppressing the voice of students, why were they not getting jobs and why did he destroy the country's economy, which was its strength'. 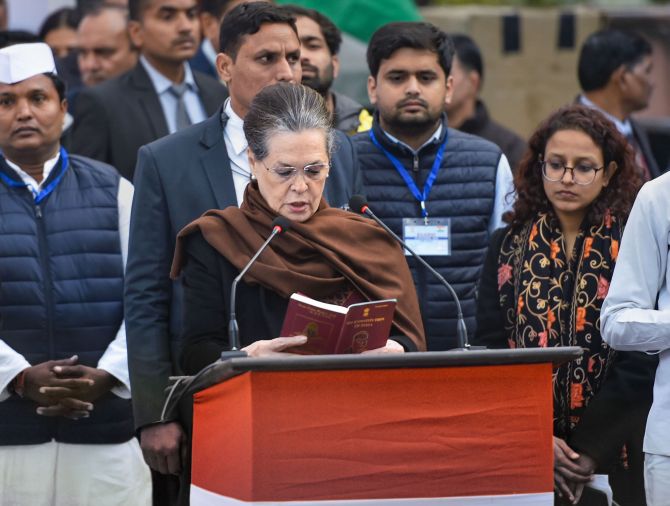 "Narendra Modi ji, you come out and tell the youth of the country why you could not provide employment to them, tell the small shopkeepers and industry on what you did with the country's economy. You will not be able to say anything.

"You can only do one thing -- you have been taught by your organisation for years and no one is better at doing this - on how to divide India, how to spread hatred and break the country. You are number one at this," he said, adding the entire country understands this now.

The college and university students understand this that Narendra Modi only knows 'how to spread hatred', he said in the all-out attack against the prime minister.

This was Rahul Gandhi's first public appearance at a party protest after his sister Priyanka Gandhi Vadra held a sit-in at India Gate last Monday.

Gandhi has been away on an official tour to South Korea.

The Congress leader said the country's enemies tried their best to suppress its voice, destroy the progress of the country, 'to demolish our strength -- our economy- but the voice of India fought this and stopped our enemies'. 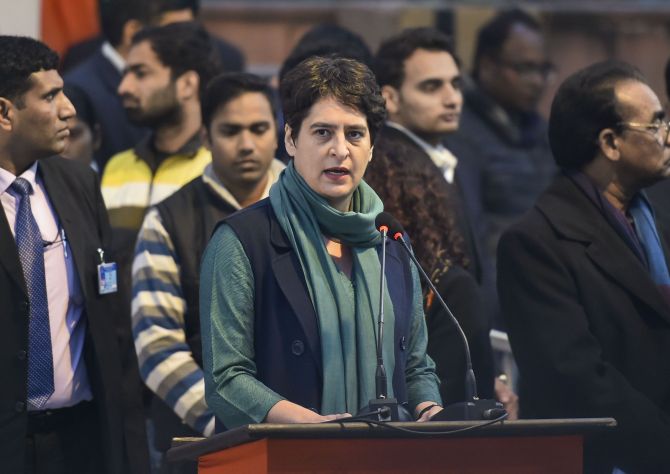 "It is strange, that the work that our enemies could not do is being done by Narendra Modi that our progress is destroyed and the voice of the people silenced," he said.

He said it is not the voice of the Congress party that was protesting at Rajghat today, but this was voice is of 'Bharat Mata'.

"Narendra Modi ji you are not fighting with the Congress party, don't be under a wrong impression. This is the voice of the country and it is standing against you," Gandhi said.

Gandhi said the Preamble to the Constitution was read at the 'Satyagraha for Unity' rally and it was the voice of the people.

"That voice fought against the British and made them flee the country and the same voice made the country's economy stand and without that voice, India cannot be," he added. 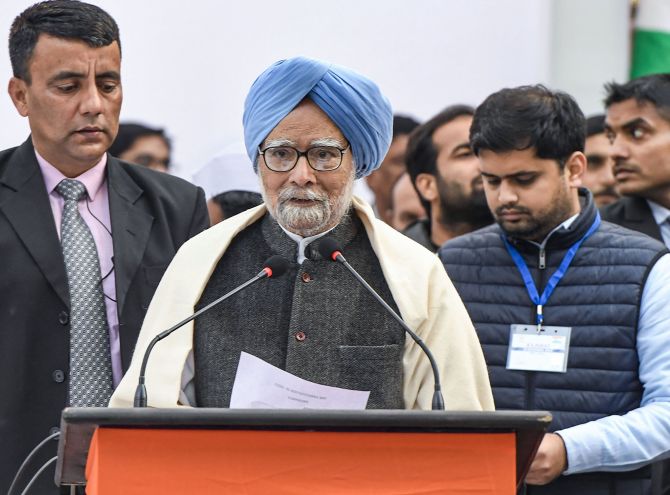 Hitting out at Modi for saying that those protesting on the streets against the CAA could be identified by their clothes, Gandhi said, "When it comes to clothes, the entire nation knows you because of your clothes. It was you who had worn the suit worth Rs two crore and not the people of the country."

The former Congress chief said the Constitution 'was made by people of every religion, by Ambedkar and the voices of Hindu, Muslim, Sikh, Christian, are in this Constitution'.

"You cannot attack it as the entire country will stop you," he said.

Gandhi said the voice at the 'Satyagraha' was not that of the Congress party, but of the entire country, as he thanked people for participating in the protest.

After reading out the Preamble in Hindi, Priyanka Gandhi Vadra said in the names of all those 'martyred' during the anti-CAA protests, her party resolved to protect the Constitution.

"In the name of Bijnor's 22-year-old Anas, who used to earn money for his family through a coffee-vending machine and had recently gotten married. In the name of 21-year-old Suleiman, who was studying for the UPSC exam and used to take tuition," she said. 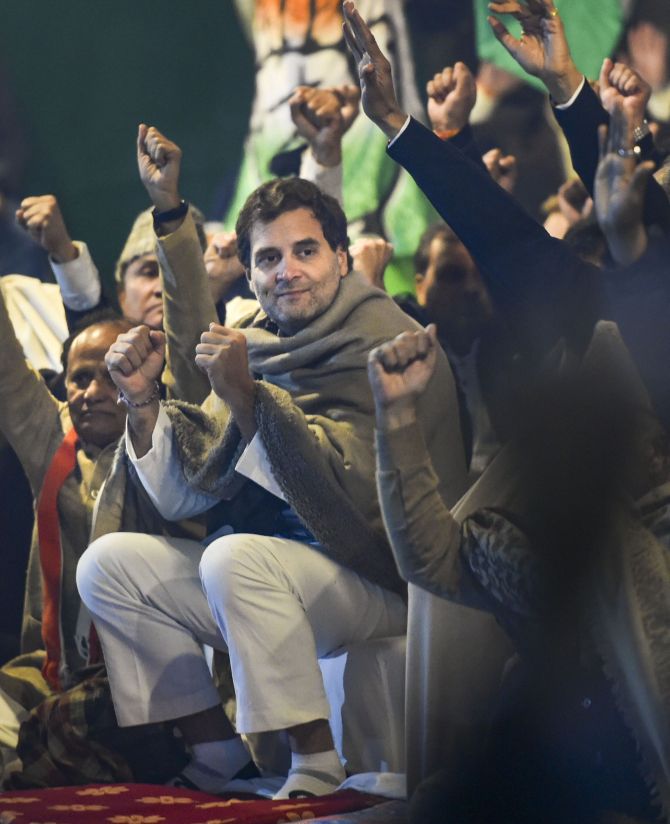 IMAGE: Rahul launched a scathing attack on Prime Minister Narendra Modi, accusing him of spreading hatred and breaking the country, while warning that the people will not let him suppress the voice of 'Bharat Mata' or attack the Constitution. Photograph: Arun Sharma/PTI Photo

On Sunday, Suleiman's mother told her with tear-filled eyes that her son was 'martyred' for his country, she added.

"In the names of all the children who have been martyred in this movement. In the name of Bijnor's Omraj Saini, whose five children are waiting for him and he is in the hospital, injured. In their names, we resolve today that we will protect the Constitution and will not allow it to be destroyed," the Congress general secretary said.

Another Congress general secretary, K C Venugopal, said the programme was organised to remind the government about the strength of India's Constitution.

"This is to show solidarity with all the students of the country who are agitating for the cause of freedom of speech and expression. The country is going through a very difficult period because of the bad policies of this government.

"Our workers are here to express solidarity with our students, youth and those suffering due to the bad policies of the government, especially those protesting against the amended Citizenship Act," he said. 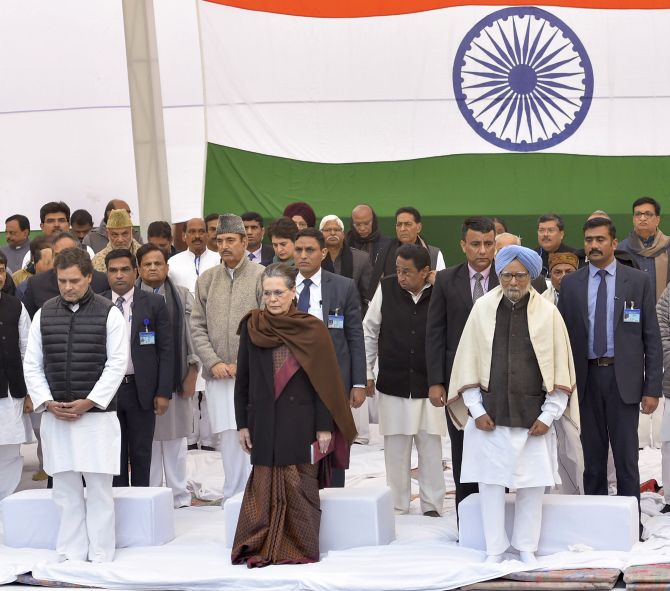 IMAGE: Sonia, former PM Manmohan Singh, Rahul and other leaders read the Preamble of the Constitution at the Satyagraha. Photograph: Arun Sharma/PTI Photo

Some religious leaders were also present at the spot.

The leaders and workers of the party, who sat under the shadow of a huge national flag, joined the top leaders in reading out the Preamble to the Constitution.

Rajasthan chief minister Ashok Gehlot and Madhya Pradesh chief minister Kamal Nath asserted that their governments will not implement the amended Citizenship Act in the Congress-ruled states as it was against the basic principles of the Constitution.

Chhattisgarh minister T S Singh Deo, on behalf of chief minister Bhupesh Baghel, said the CAA and NRC will not be implemented in his state either.

The Congress had on Friday said 'unconstitutional' legislation will not be implemented in the party-ruled states.

"The identity of India is through its Constitution. We reject this law, and while respecting the Constitution, our government will not implement it," Nath said amid loud cheers from the crowd.

Gehlot alleged that an atmosphere of fear was created by the BJP-led government and that democracy was in danger.

"The prime minister is misleading people over the NRC, saying it was not discussed, while the home minister is saying that the NRC will be implemented. The country understands that they want to divide it on religious lines," he said. 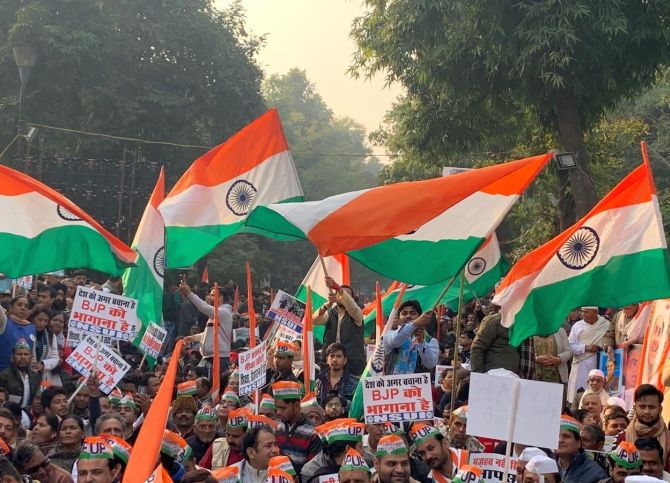 "In Rajasthan, the CAA and the NRC will not be implemented as they are against the basic principles of the Constitution," Gehlot said, alleging that the ruling BJP used the 'mask of democracy' to win elections.

The party held that in line with the path of non-violence shown by Mahatma Gandhi, it would fight against the 'dictatorial' government and to protect the 'sacred' Constitution.

The Congress said there was widespread resentment against the recent actions of the government and people across the country, especially youngsters, were demanding restoration and maintaining the sanctity of the rights guaranteed by the Constitution.

It also stood in support of the students protesting against the government and the use of 'indiscriminate police force' against ordinary citizens in the name of maintaining law and order, the party said, adding that this had led to further worsening of the situation.

The party was up against the government for using 'brute' force against 'silent and peaceful' protesters across the country and for 'stopping' people from holding demonstrations against the new citizenship law and the National Register of Citizens, proposed to be implemented across the country, it added. 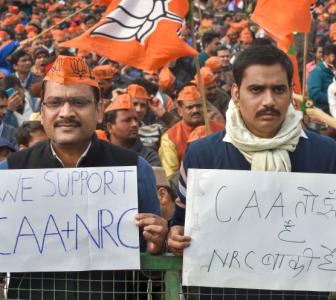 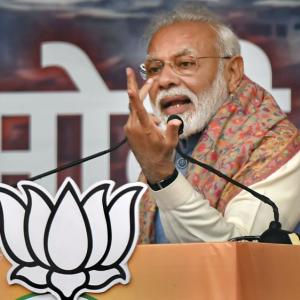 How much will you befool country: Oppn slams PM on NRC