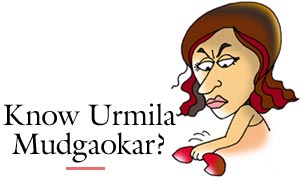 It was a testing time for T Subbarami Reddy, Rajya Sabha member. The Congress party's pointman for Bollywood was under intense pressure to match the BJP's daily intake of stars and starlets. General secretary Kamal Nath wanted Reddy to produce a film star to counter the appeal of Hema Malini who joined the BJP a few days ago.

But when Reddy suggested yesteryear heroine Moushumi Chatterjee, Kamal Nath was distinctly unenthusiastic. The reason was clear pretty quickly. The Chhindwara strongman had never even heard of her.

So Reddy then had to conduct a quick course in 1970s Bollywood history for Kamal Nath. Convinced, the Congress duly produced Chatterjee at a press conference at the party headquarters where the Bengali actress did a fairly competent job of fielding questions.

But much to Reddy's discomfiture Kamal Nath's ignorance was not limited to 1970s Bollywood. What's more, it may have cost the Congress a bright, young A-list prop for its election campaign.

Apparently, when Kamal Nath was urged to speak to Urmila Matondkar, he addressed her as Mudgaokar.

The Rangeela girl was not amused and promptly terminated the telephone call. Last heard, the untiring Reddy was trying to smooth ruffled feathers.

As bad as it gets!

ith elections round the corner, building scenarios is the game of the season, if one discounts the 'friendship' cricket series

So if you are what is commonly described as a political animal, here is a scenario to make you wake up in the middle of the night with a cold sweat:

The 14th Lok Sabha is 'hung' precariously between the Bharatiya Janata Party-led National Democratic Alliance and the Congress-led 'secular' alliance. As a result, the crucial role of kingmaker falls to the gleeful lot of some regional leaders.

At least two such parties with 20 or so MPs each are ready to do business with either alliance provided -- and here is the catch -- they get a 'major say' -- you know what they mean when they say that, don't you? -- in the new government.

For the NDA the job of prime minister is non-negotiable. It will be Atal Bihari Vajpayee as PM or the NDA will not form the government at all.

But it is not so easy for the Congress-led alliance. It cannot, and does not, insist on foisting Sonia Gandhi as PM. So it bargains with one of the regional outfits and, reluctantly, agrees to make its leader prime minister, ostensibly to keep its main rival, the BJP, out of power.

What happens next could well turn India into a banana republic.

The new PM becomes a puppet in the hands of dubious interests. Law and order deteriorates. India's image, at home and abroad, is dragged through the mud.

This is not the product of the feverish imagination of congenitally pessimistic politicians, but a hard-nosed assessment of the worst-case scenario.

Senior Sangh Parivar leaders have mulled over this possibility with trepidation, though they are loath to air their fears.

Thumbs down to He-Man?

The BJP has been welcoming all manner of film stars, from the A-grade Hema Malini to B- and C-grade bit players of yesteryear to create an atmosphere of its winnability.

But the Big Daddy of them all, Dharmendra, who is reportedly keen to do duty for the saffron party, is yet to get the nod.

Wonder why? Because someone in the higher echelons of the party is worried that salacious tales of Paaji's alleged love for his drink and his overpowering libido could embarrass the party.

But as a friend of Bollywood's original He-Man pointed out, if such tales about one of the BJP's leading lights did not hurt his career, why would they have a different impact in Dharamji's case?

Benod Kumar, director of the Lal Bahadur Shastri National Academy of Administration, Mussoorie, loves wearing a starch-white dhoti-kurta, though he is far removed from any of the ills that have made politicians, universally identified with that attire, an ugly word.

But so rigid is the obscurantist dress code for babus that every time he is called upon to take the young crop of probationers from the Indian civil services for an 'at home' with the President or the prime minister, he has to discard his favourite everyday attire for the stiff, suffocating sherwani and churidar even if it is 40º Celsius and more.

The only time he did not have to doff his regular wear in favour of the regulation Nehru jacket was when he took the probationers for an 'at home' with the deputy prime minister last year. Kumar pointedly asked L K Advani's aides if he could appear in dhoti-kurta and was told that the DPM would not have any objection.

In this age of fickle loyalties, when politicians sniff the electoral wind and decide which way to turn, a teenybopper of a television reporter asked Congress spokesman Satyavrat Chaturvedi if he was joining the BJP. Pat came the reply, "Yes, I am. And Arun Jaitley and Pramod Mahajan are joining the Congress!"