BJP workers attack one another in armed rallies, blame us: Mamata

West Bengal Chief Minister Mamata Banerjee on Thursday alleged that the Bharatiya Janata Party is holding rallies with arms every day and its workers are attacking fellow activists while blaming it on the ruling Trinamool Congress. 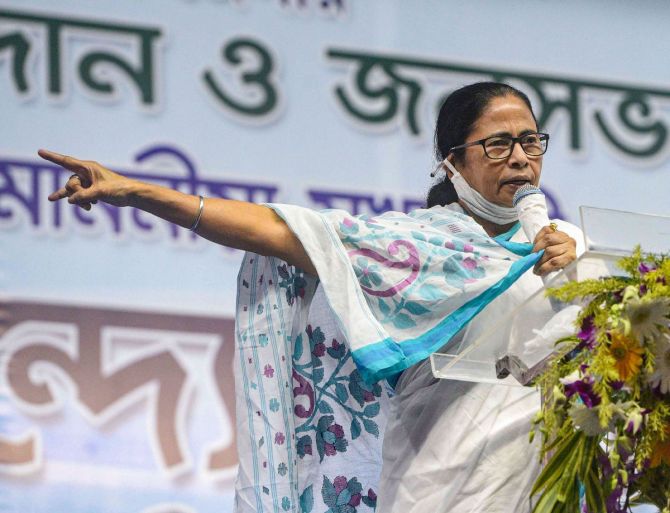 Banerjee, also the TMC supremo, said in a sarcastic way that personnel of security forces such as the Central Reserve Police Force, Border Security Force, Central Industrial Security Force and the Army are present at convoys of every BJP leader visiting West Bengal.

Describing the TMC as the party of the state and the BJP as one belonging to Delhi and Gujarat, she urged people to stop 'goons from outside' the state during elections here.

"They (BJP activists) are coming out (for rallies) with arms every day. They are slapping themselves and blaming it on the Trinamool Congress.

"Just think of the situation. They are roaming around with the BSF, CRPF, Army and the CISF (personnel). Why are they so scared?" Banerjee said.

Her statement came days after the death of a BJP worker during a protest rally in Siliguri on December 7.

The police have claimed that armed persons were brought in the rally and the man was killed in firing from a shotgun which is not used by the force.

The saffron party, however, maintained that the police were behind the killing of its activist.

After visiting a camp of the 'Duare Sarkar' (government at your doorstep) scheme in south Kolkata's Bhowanipore area, she asked, "Why will goons from outside (the state) come to Bengal during elections?"

The TMC chief slammed the BJP-led government at the Centre for its attempt to enforce the National Register of Citizens (NRC), Citizenship Amendment Act (CAA) and the National Population Register (NPR) and urged people to ensure that their names are there on the voters' list.

"Voter card is an identity card. There are some people who do not have any work and have joined the BJP. They are saying that they will enforce the NRC, CAA and the NPR.

"Though we will not let them do it, still I want people to understand the importance of voter cards," she said.

Comparing BJP's leadership to dictators Adolf Hitler and Benito Mussolini, Banerjee claimed that the party is indulging in false propaganda.

Banerjee, who is among the vocal critics of the saffron party, said it has a 'prepared script' to break the movements against it and is trying to do so with the farmers' movement.

The TMC supremo criticised Nadda's outreach programme in her constituency Bhawanipore in Kolkata on Wednesday and said it was poorly attended.

She that the BJP has a 'prepared script' to divert the attention of people, break the movements against it and is trying to do so with the ongoing farmers' movement too.

"The Narendra Modi government is not abiding by the principles of democracy or the federal structure or the Constitution and is encroaching upon the jurisdiction of a state government," she said.

Banerjee claimed that former prime minister Rajiv Gandhi had not 'dared' to do such things though he had the support of 400 MPs.

"But BJP with around 300 MPs is enforcing whatever laws it wishes to and is hurting the interests of the common man".

Attacking the BJP-led government at the Centre for seeking accounts of the relief fund given to the state after the Amphan cyclone, she said, "We first want to know what happened to the PM Cares Fund".

Claiming that she has inputs about 'many happenings', the chief minister said that she does not indulge in personal attacks.

"If anyone in my family commits any wrong, he will be punished. I am for upholding of law, peace and against any kind of violence," Banerjee said.

Describing the laying of the foundation stone for a new Parliament building by the prime minister on Thursday as a 'stunt', she said that the money allotted for this could have been given to farmers for their benefit.

"The present Sansad Bhavan can suffice for now," she added.

Demanding withdrawal of the contentious agri laws by the Centre, Banerjee said that the legislations will hurt the interests of farmers and result in disastrous effect on prices of food items.

Claiming that the rights of the farmers have been taken away by the new farm laws, Banerjee said that their produce will be 'bought by force' by corporates and people will have to buy food items at high prices.

"People must unite for protection of the interests of farmers," she said at the rally held in front of Mahatma Gandhi's statue in Kolkata.

Potatoes, onions and edible oil must remain within the ambit of the Essential Commodities Act so that prices of these food items can be regulated for the benefit of the common man, the chief minister said.

Referring to Nadda's programme, she said, "I heard that he has said today that the Centre gives rice and the TMC eats away everything. Ask them (BJP) who takes away the money from the states and does not give back its dues."

The chief minister said that the Centre takes away money from the states collected as income tax, customs duties, GST, but does not give back their dues, which is only 40 per cent of total collected amount.

The TMC supremo claimed that the BJP is not a party of Bengal but that of Delhi and 'more that of Gujarat'.

Alleging that the BJP is bringing strongmen from outside and sending them to West Bengal villages, she asked her party members to challenge them and file FIRs at local police stations when they come across any such persons.

Claiming that Kolkata is the safest city in the country, Banerjee said, "Bengal is such a nice place and they (BJP) are indulging in false claims against it."

She claimed that during the TMC rule, all religious programmes were held peacefully, including Durga Puja, Bakri Eid and Kali Puja.

Banerjee also attacked the BJP for allegedly spreading canards about her party.

"They are saying that lawlessness prevails in the state during the COVID-19 pandemic.

"I ask you whether you are unable to go out in the streets. They are also saying that there is no food, no health (infrastructure)," Banerjee said.

Banerjee asked people to enrol themselves for various schemes of the state government.

Claiming that her party will return to power in the assembly election due in April-May next year, she said, "Till next June, rice and wheat will be free in Bengal. Our government will continue and we will try to make health and food free for every citizen of Bengal." 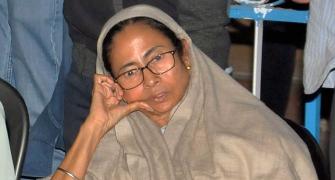