From recruiting workers from reserved categories of society for every polling booth to painting the party's symbol lotus at various locations and staying in touch with priests and people from cooperative societies and self help groups in near neighbourhood -- the Bharatiya Janata Party has devised a booth-level strategy with stress on minute details to wrest power from the Trinamool Congress in West Bengal. 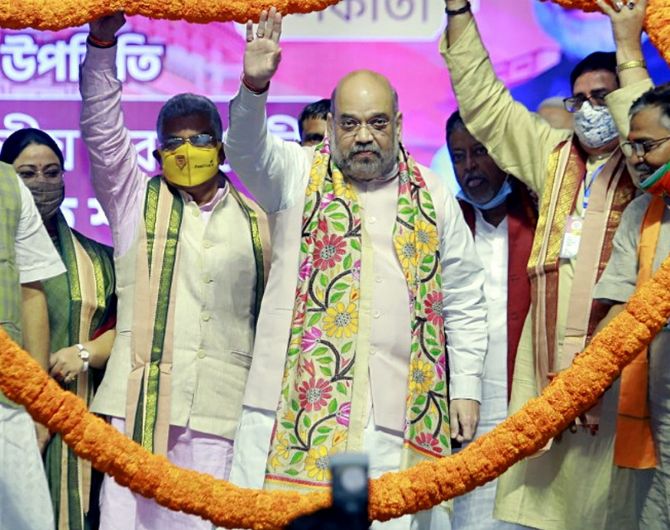 IMAGE: Union Home Minister Amit Shah being garlanded by the party workers during a meeting with different community people in a Samajik Samuh Samvad event in Kolkata . Photograph: ANI Photo

Senior party leader and Union home minister Amit Shah, who will visit the state every month till elections are held, has set a detailed 23-point to-do list for every booth to ensure the BJP's victory in West Bengal, where it has never been in power, sources said.

Shah, who missed campaigning in Bihar, made a two-day trip to Bengal starting November 5 to oversee BJPs preparedness for the state polls.

BJP president J P Nadda was scheduled to accompany Shah to Bengal, but his visit was cancelled a night before.

During the visit Shah met the family members of a BJP worker Madan Ghorai allegedly killed in judicial custody last month in Patashpur in Purba Medinipur district and hit out at Chief Minister Mamata Banewrjee over alleged minority appeasement and deteriorating law and order,

Elections to the 294-member West Bengal assembly are due in April-May next year.

The BJP state unit leaders have been asked to divide all the polling booths into four categories -- A, B, C, D -- and form committees on basis of social configuration of the respective polling area, the sources said.

Workers have been asked to improve the category of their booths from D to C, C to B and so on, and have been assigned various tasks including recruiting at least 20 people from SC, ST and OBC sections of the society, organising at least six party programmes, making arrangements for people to listen to Prime Minister Narendra Modi's 'Mann Ki Baat' and others.

Staying in contact with all possible influences in every polling booth such as priests of temples, saints of religious organisations, office bearers of cooperative banks and dairy, elected sarpanchs and those who lost panchayat elections are also an integral part of the BJP's test and tried booth strategy.

With an aim to make the BJP's presence felt in every neighbourhood and its campaign reach every voter, the local party workers have been asked to paint at least five locations in every polling booth area with BJP's election symbol, identify five party workers with motor cycles and make locals and party workers download the Namo App in their mobiles.

It has also instructed the party workers to collect booth-wise data of results of last assembly and Lok Sabha elections which will help them in devising the strategy for their respective booths, the sources said.

The BJP is trying its booth level tested and tried strategy in West Bengal where polls are scheduled to be held early next year.

The party has emerged as the main challenger to the ruling TMC, winning 18 of the 42 Lok Sabha seats in the 2019 elections with more than 40 per cent of total votes.

With the BJP's strength increasing in the state in the last few years, party leaders have exuded confidence that it will be able to end chief minister Mamata Banerjee's 10-year rule in the 2021 assembly elections.

The BJP has kick-started its campaign for the assembly elections and is challenging the Trinamool Congress at the hustings with the new slogan of "Ei baar Bangla, parle samla (Now it's Bengal's turn, hold on to it if you can)", party state president Dilip Ghosh told PTI, referring to the recent victory of the NDA in Bihar polls.

Amit Shah and party national president J P Nadda will visit the state separately every month to take stock of the party organisation ahead of the elections, Ghosh said.

"Amit Shah and J P Nadda will visit the state separately every month till the assembly elections are over. The dates are yet to be finalised. Their regular visits will energise the party workers," Ghosh told reporters.

Shah is likely to visit the state for two consecutive days a month and Nadda for three days, party sources said.

In this election in West Bengal it will be a direct fight between the BJP and the TMC, Ghosh said, dubbing both the Left parties and the Congress as a spent force.

Hinting at defections of TMC leaders to his party ahead of the polls, Ghosh said that even leaders of the Mamata Banerjee-led party are feeling suffocated and looking for "oxygen of freedom", whereas the BJP is a democratic party with "a number of oxygen cylinders".

Ghosh said that for effective management of the party's campaign, the BJP has divided the state in five zones -- Medinipur, north Bengal, Kolkata, Nabadwip and Rahr Bongo -- on the basis of local issues and their characteristics.

With an eye on the elections, the BJP Tuesday divided the state into five organisational zones and put central leaders in charge of them, party sources said.

Deodhar, Tawde, Gautam and Sonkar are likely to conduct party meetings in their respective zones during the day.

BJP national general secretary Dushyant Gautam, who has been given charge of the Kolkata zone, exuded confidence after arriving in the city that the saffron party will come to power in the state in the assembly elections. 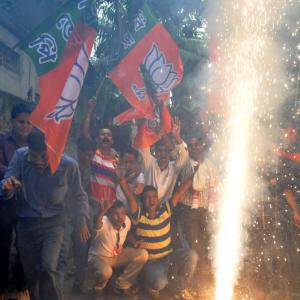