Bulldozing a resurgent rainbow coalition led by the Samajwadi Party, the Bharatiya Janata Party on Thursday stormed back to power in Uttar Pradesh, and also retained Uttarakhand, Manipur and Goa, while Arvind Kejriwal's Aam Aadmi Party scripted a stellar victory in Punjab, winning a three-fourth majority after pulverising its rivals.

Holi came a week early for the BJP as an incumbent government returned to power in UP after over three decades, with the party riding on the enduring charisma of Prime Minister Narendra Modi and Chief Minister Yogi Adityanath's effective implementation of welfare programmes and a ceaseless campaign against crime and criminals. 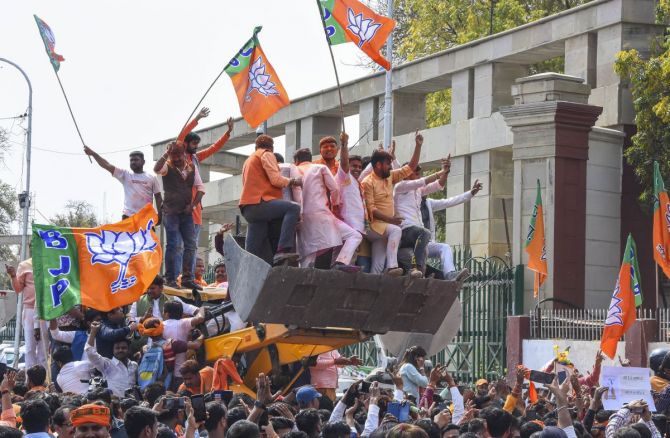 IMAGE: BJP supporters holding party flags ride a bulldozer in celebration, as the party scores a landslide victory in UP assembly elections, at the party office, in Lucknow, on Thursday, March 10, 2022. Photograph: Nand Kumar/PTI Photo.

As the BJP retained its grip on the four states, further fortifying its positions ahead of the 2024 Lok Sabha elections, the Aam Aadmi Party wrested Punjab from the Congress, which lay shorn of power in yet another state, adding to a string of electoral losses. A debilitated Congress now rules only Rajasthan and Chhattisgarh.

Prime Minister Narendra Modi, who addressed a celebratory gathering at the BJP headquarters in New Delhi, hailed the victories as an 'emphatic endorsement of the party's pro-poor and proactive governance' and a 'vote for political stability'. The spectacular rise of AAP outside Delhi, with an unprecedented mandate in Punjab and a toehold in Goa where it bagged two seats, analysts said,  foretells a big likely churn in the opposition camp.

Kejriwal called his party's astounding victory in Punjab a 'revolution'.

The outcome of the February-March assembly polls, seen as a barometer to gauge the people's mood ahead of the next Lok Sabha elections, had the Congress's epitaph written all over.

The party not only lost Punjab miserably, with both the state's Chief Minister Charanjit Singh Channi and party chief Navjot Singh Sidhu biting the dust, it could win only two seats in UP notwithstanding the high-decibel campaign by the Gandhi siblings Rahul and Priyanka. 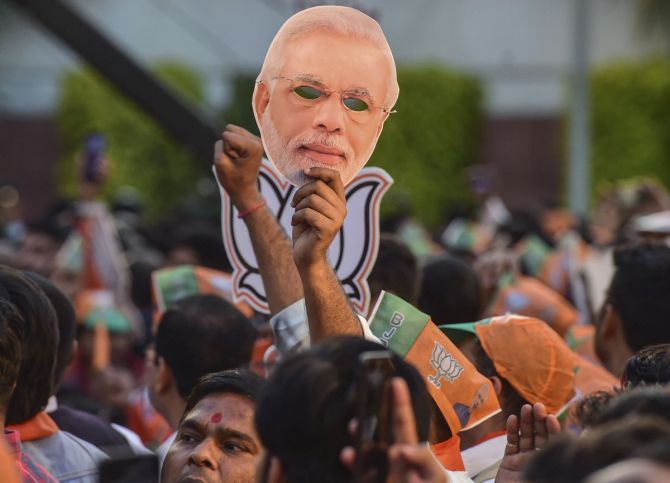 As a consequence of the rout, the Congress now is in the same league as the AAP, which will also helm two states, further losing its standing among anti-BJP parties contemplating a broad-based coalition against the saffron party ahead of the 2024 Lok Sabha elections.

The BJP's showing also indicated that its handling of the devastating second wave of Covid last year and the agrarian unrest over the three contentious farm laws, which were subsequently withdrawn, did not have a major impact on its electoral fortunes.

According to Election Commission data, the BJP won or was leading in a bulk of the 113 seats in western UP, where the farmers agitation was more belligerent and the party was believed to be on a sticky wicket.

"People have buried the politics of caste and religion by ensuring the victory of BJP and its allies in Uttar Pradesh under the leadership of Prime Minister Narendra Modi," Adityanath said at the state BJP headquarters in Lucknow that was buzzing with excitement, with the party workers dancing to popular tunes and throwing gulal at each other. 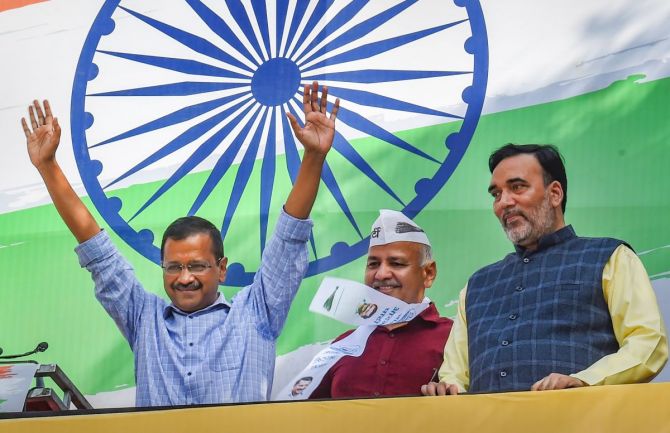 Bulldozers -- real as well as miniature versions -- were at the centre stage of the celebrations as they had figured prominently in the poll campaign in a reference to the action taken against criminals and what the state government calls buildings linked to the 'mafia'.

In the 403-member Uttar Pradesh assembly, the BJP has won 255 seats, 53 more than the halfway mark of 202, while its allies Apna Dal-S and Nishad Party clinched 12 and six seats respectively.

The Samajwadi Party of Akhilesh Yadav, which many expected would pose a stiff challenge to the BJP, fared way better than the 2017 assembly polls when it had secured 47 seats, but failed to unseat the BJP.

The SP has won 111 constituencies.

Its ally Rashtriya Lok Dal of Jayant Chaudhary has pocketed eight seats and Suheldev Bhartiya Samaj Party of Om Prakash Rajbhar, a former minister in the Adityanath government who joined hands with SP just ahead of the polls, won six.

However, in a setback to the party, Rajbhar himself lost by a staggering, over 45,000 votes in Fazilnagar.

The Bahujan Samaj Party of Mayawati, a four-time chief minister, was all but obliterated with just one seat despite polling 12.87 per cent votes.

The BJP increased its vote share in almost all the states that went to polls, including a marginal rise in Punjab, where it managed to win just two seats. The AAP's broom swept away its rivals in Punjab where it won 92 of the 117 seats, the Congress 18, the Shiromani Akali Dal 3, the BJP 2, and the BSP and Independent won one seat each.

In terms of vote share, the AAP won 42 per cent of the total votes cast, as against 23.7 per cent it had five years ago.

The elections dealt a body blow to the Shiromani Akali Dal, which ruled the state several times, as its chief Sukhbir Singh Badal and his father Parkash Singh Badal, both former chief ministers, fell by the wayside.

Chief Minister Channi lost both seats he contested, and former chief minister Amarinder Singh, who left the Congress to join hands with the BJP, was also defeated.

The Congress's vote share slumped from 38.5 per cent in 2017 to 23 per cent, with the party managing to hold on to just 18 seats as against 77 it had won five years back.

"First this revolution happened in Delhi, then in Punjab and it will now happen all over country," a beaming Kejriwal said at the AAP party headquarters in Delhi. 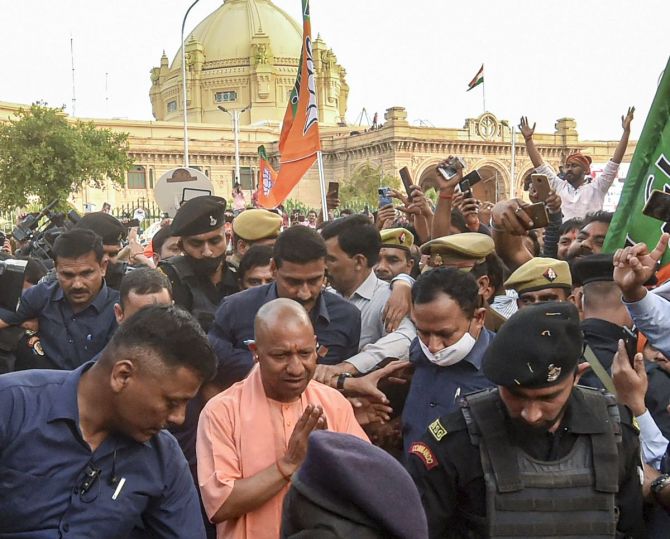 In Uttarakhand, the BJP was all set to form a second successive government, the first in the state's 21-year history.

However, Chief Minister Pushkar Singh Dhami lost his Khatima seat, forcing the BJP to jog its mind and find a suitable candidate for the top post.

The Congress won 18 seats with a vote share of 37.91 per cent, while others secured five seats.

Harish Rawat, a former chief minister and Congress heavyweight, could not pilot the party's return to power in the state nor could he save his own seat of Lalkuwa.

The saffron party won a simple majority in insurgency-hit Manipur, where it bagged 32 seats, having won 37.83 per cent votes. Its partners in the North East Democratic Alliance, the northeastern version of the National Democratic Alliance -- the National People's Party and the Naga People's Front -- which fought separately, secured seven and five seats respectively, while Bihar ally Nitish Kumar's Janata Dal-United won six seats. 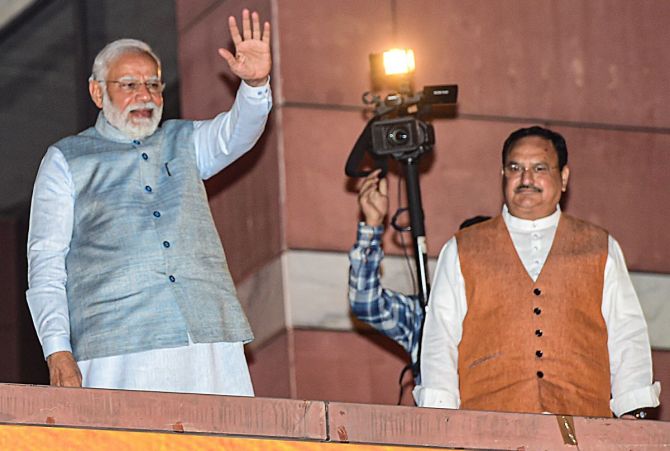 The Congress, which gave three successive governments to the state since 2002 before the BJP engineered large-scale defections to form its government in 2017, could win just five seats with 16.83 per cent votes.

The BJP ran a coalition government with NPP and the NPF in Manipur, but it's still unclear whether the two parties will share power in the new dispensation helmed by N Biren Singh.

Overcoming anti-incumbency, the BJP emerged as the single largest party in Goa by winning 20 seats, just one shy of the halfway mark, and quickly enlisted the support of regional outfit Maharashtrawadi Gomantak Party, which won two seats, and three Independent MLAs to form its government for a third consecutive term in the state.

'Humbly accept the people's verdict. Best wishes to those who have won the mandate. My gratitude to all Congress workers and volunteers for their hard work and dedication. We will learn from this and keep working for the interests of the people of India,' former Congress president Rahul Gandhi said on Twitter while reacting to the party's humiliating loss. 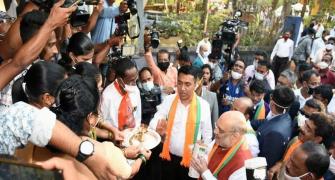 BJP wins 20 in Goa, ties up with MGP, independents 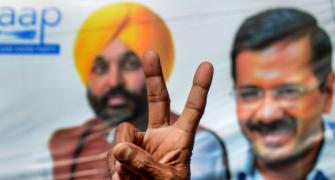 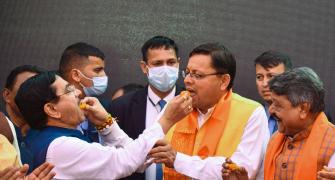 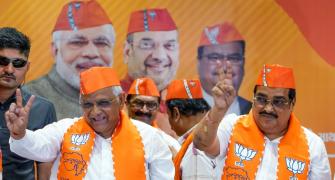 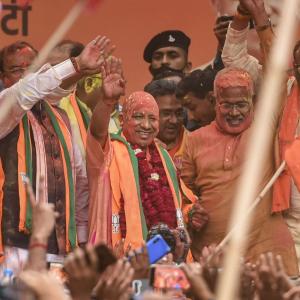 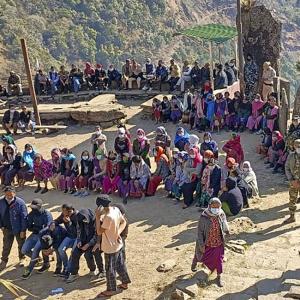 BJP wins Manipur, but no consensus on CM choice