Controversial Bharatiya Janata Party MP Pragya Thakur, accused in the 2008 Malegaon blasts case, has been appointed to a parliamentary committee on defence, triggering a political row as the Congress on Thursday attacked the government for nominating a person charged with "spreading terror" to a panel tasked with defence related issues. The ruling BJP, however, strongly defended her presence in the 21-member joint consultative committee headed by defence minister Rajnath Singh and asserted that the Bhopal MP can help in "framing right methodology" so that innocents are not "victimised" the way she was by the Congress-led United Progressive Alliance government.

Three-time chief minister of the erstwhile state of Jammu and Kashmir Farooq Abdullah, who is detained in Srinagar under the stringent PSA, former defence minister and Nationalist Congress Party leader Sharad Pawar and BJP working president J P Nadda are among the other committee members.

It which will comprise 12 members from Lok Sabha and nine from Rajya Sabha.

However, it was the presence of Thakur, a first-time MP with a hardline Hindutva background and who has triggered several rows earlier with her controversial remarks, that became a lightning rod for yet another political joust involving her.

She is an accused in the 2008 Malegaon blasts case, and is currently out on bail.

She is facing trial for multiple charges under the Unlawful Activities (Prevention) Act.

The Congress was quick to take a dig at Prime Minister Narendra Modi and also termed it "unfortunate" for the country that an MP accused of "spreading terror" has been nominated as member of a defence-related committee.

"Modi has not been able to forgive her from the heart but she has been given the responsibility on important issues such as the country's defence. That is why if there is Modi, anything is possible," tweeted Congress spokesperson Randeep Singh Surjewala.

After she had called Naturam Godse, who had assassinated Mahatma Gandhi, a patriot during the recent Lok Sabha polls, Modi had condemned her comments and said he would not be able to forgive her.

She had also later regretted her comments.

The BJP, however, strongly defended Thakur's nomination to the panel with its leader Meenakshi Lekhi, who is also a member of the committee, saying that the Bhopal MP can help in "framing right methodology" so that innocents are not "victimised" the way she was.

Hitting back at the Congress, Lekhi said the party seems to have lost its faith in democracy and forgotten that Thakur is an elected member of Parliament.

People know that Thakur was falsely implicated by the Congress-led UPA government, she said.

The Bombay high court granted Thakur bail on health grounds in April 2017 after the National Investigation Agency dropped charges against her under the Maharashtra Control of Organised Crime Act.

Besides the 21 MPs, the committee also has Arjun Ram Meghwal and V Muraleedharan, both junior ministers for parliamentary affairs, as its ex-officio members.

Thakur has often hogged headlines for her controversial statements.

She was issued a show-cause notice by the BJP during the general election for her Godse remarks.

She previously earned the opposition ire when she claimed that then Maharashtra ATS chief Hemant Karkare was killed in the 26/11 Mumbai terror attacks due to her "curse".

She had also attributed the deaths of Sushma Swaraj and Arun Jaitley to 'marak shakti' (killing power) used by BJP's political adversaries. 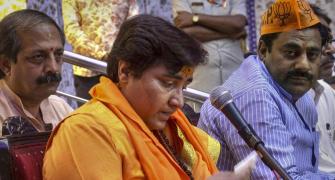