Cashing-in on the anti-incumbency factor in a big way, the Bharatiya Janata Party-Maharashtrawadi Gomantak Party combine on Wednesday rode to power in Goa, ousting the Congress and securing majority in a House of 40 members, nearly half of whom will be new faces.

While the BJP won in 21 assembly constituencies, seven more than last time, MGP raised its tally from two in the last polls to three seats in the March 3 assembly election results for which were declared Wednesday.

Four members of influential Alemao family -- Churchill, Joaquim, Valanka and Yuri, who were given tickets by Congress-NCP alliance lost.

So pronounced was the wind of change that 19 new faces were elected this time.

Manohar Parrikar, who spearheaded the BJP's charge on the illegal mining issue and is tipped to be the next chief minister, won from Panaji, defeating Congress' Yatin Parekh by over 5,000 votes.

He said the two allies will meet to decide when to stake claim to form the government.

"It is a statement by the people that they want a clean government. It's our responsibility to give good governance," he said.

Vishwajit Rane, former health minister from Congress, said that it is collective responsibility of the party.

"We can't blame one or another, this or that factor. It was responsibility of individual candidates to win their seats," he said.

In Salcette, which is a Congress bastion, Congress won two seats out of eight. BJP, which had fielded several Catholic candidates, managed to get a hold in Salcette. 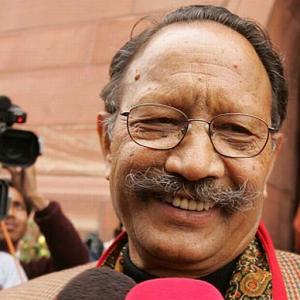 Five-State Verdict: The WINNERS and LOSERS