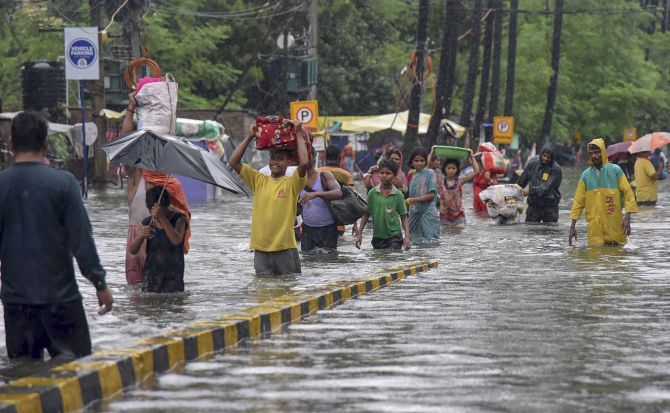 Union minister Giriraj Singh on Friday came down heavily on Bihar Chief Minister Nitish Kumar and his Deputy Sushil Kumar Modi on water logging in Patna caused by last week's incessant rains, saying Kumar should take responsibility for the problems being faced by the people.

"Definitely...Tali Sardar ko to Gali Sardar ko (If a leader takes credit, he must also accept criticism)," he replied when asked whether Nitish Kumar, who has been the chief minister for past 15 years, should take responsibility for the situation in Patna and elsewhere in Bihar.

Notably, many parts of Patna, including Kankerbagh, Rajendra Nagar and Pataliputra, have been water-logged for the past one week.

The state capital witnessed unprecedented rainfall between September 27 and 29, causing flooding in many areas.

Singh, the Union Animal Husbandry, Dairying and Fisheries Minister, also criticised Bharatiya Janata Party leader and Deputy Chief Minister Sushil Modi, saying, "If Sushil Modi is our leader and all credit is given to him in the party, he should also own the criticism."

The Begusarai MP said the 'wyavastha (dispensation)' is responsible for the problems being faced by the people in the current situation.

He apologised to the people of Patna for the problems and difficulties they were facing.

Action must be taken against those responsible, the BJP's firebrand leader said, asserting that he would act against officials found to have created problems in his constituency.

"It is unfortunate that instead of carrying a probe against officials, our own minister stands in support of such officials," he added.

This is not the first time when the minister has attacked his own partymen or allies.

'How beautiful would the picture have emerged, had phalahaar (a fruit feast) been organised during Navaratra with the same fervour with splendid photographs taken. Why do we lag behind in observance of our own karm-dharm (religious customs) in public, while staying ahead in pretension,' he had tweeted in Hindi along with a photo of the three leaders attending an iftar.

BJP chief Amit Shah had to step in to douse the fire by admonishing the fiery Hindutva leader and asking him to avoid making such comments. 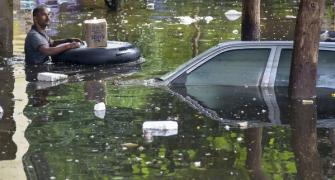 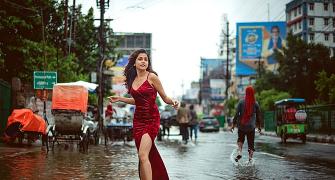 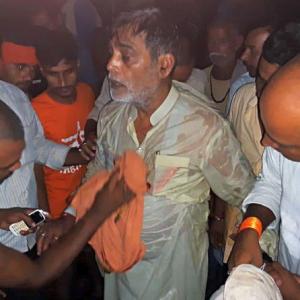