West Bengal Chief Minister Mamata Banerjee on Thursday visited several booths across the high-profile Nandigram constituency, where she is pitted against her protege-turned-adversary Suvendu Adhikari of the Bharatiya Janata Party, as sporadic incidents of violence and allegations of booth jamming marred the voting process in the second phase. 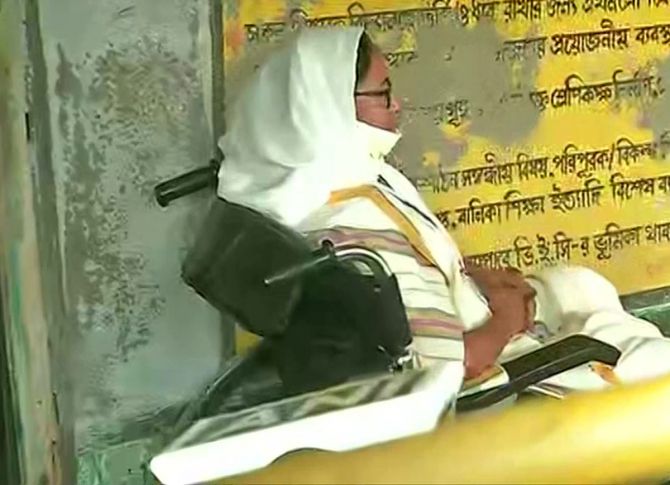 After monitoring the situation in the assembly segment, where local Trinamool Congress leaders complained that their election agents were not being allowed to enter booths, Banerjee left her rented residence at Reyapara around 1 pm.

She then visited polling centres at Sonachura, Reyapara, Balarampur, Boyal, Nandigram block 1 and 2.

"She will also travel to various villages and booths in areas where there have been reports of threats, intimidation and jamming," Banerjee's election agent Sheikh Sufiyan said.

In the Boyal area in Nandigram, villagers alleged that BJP supporters stopped them from going to polling booths.

Supporters of the two parties then indulged in violence, as TMC leaders demanded re-polling in booth number 7, police said.

A huge police contingent was rushed to the spot to control the situation, they added.

Meanwhile, Adhikari's convoy was allegedly attacked with stones at two places while visiting booths in the assembly constituency.

His motorcade was also gheraoed as TMC supporters shouted slogans against the BJP leader.

Security forces patrolling the area dispersed the mob, making way for his convoy to move onwards.

"I am used to such protests by TMC goons. They are all followers of Mamata begum (Banerjee). Let them do whatever they want till the results are out on May 2," Adhikari told reporters.

According to TMC sources, Banerjee, who was scheduled to leave the area for campaigning in North Bengal after end of polling at 6.30 pm, changed her plans this morning.

The entire Nandigram constituency has been placed under Section 144 to avoid any untoward incident.