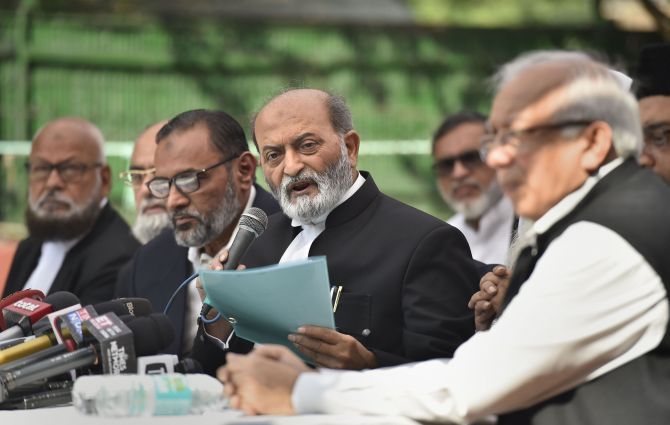 The All India Muslim Personal Law Board (AIMPLB) said on Saturday that it was contemplating to seek a review of the Supreme Court's Ayodhya verdict, even as several leaders and top organisations of the community called for not pursuing the matter any further.

Jilani said they will study the judgement and may seek a review.

Sources in the prominent Muslim body Jamiat Ulama-i-Hind said it was not in favour of filing a review petition and wants the matter to end.

The Supreme Court in a historic verdict on Saturday backed the construction of a Ram temple by a trust at the disputed site in Ayodhya, and ruled that an alternative five-acre plot must be found for a mosque in the Hindu holy town.

In Hyderabad, All India Majlis-e-Ittehadul Muslimeen president Asaduddin Owaisi criticised the Supreme Court judgment saying it is a ‘victory of faith over facts’ and suggested rejection of alternative five-acre plot given for construction of a mosque.

Owaisi, who expressed disappointment with the judgment, quoted former Chief Justice of India J S Verma that the ‘Supreme Court is supreme...and final but not infallible’.

The Uttar Pradesh Sunni Central Waqf Board, one of the main litigants in the Ram Janmbhoomi-Babri Masjid case, welcomed the Supreme Court verdict and said it has no plans to challenge it.

Taking a similar line, the Shahi Imam of the Jama Masjid in Delhi, Syed Ahmed Bukhari said the matter should not be stretched further.

Expressing satisfaction with the Supreme Court judgment in the Ayodhya case, Iqbal Ansari, one of the litigants, also said he will not challenge it in court.

Jamiat Ulama-i-Hind said the verdict was not according to its expectations but asserted that the apex court ruling is ‘supreme’.

He appealed to the Muslims to maintain peace and harmony in the country and asked them to not take the verdict as a ‘win or loss’.

Navaid Hamid, president of All India Muslim Majlis-e-Mushawarat, an umbrella body of several Muslim organisations, also appealed for peace and harmony.
Expressing surprise over the ruling, he said that ‘it is a matter of concern that evidences have not been proved’.

"I was surprised to see the ruling and it's beyond my understanding. I feel there were enough evidences in favour of the mosque but these were not taken into consideration," Nomani said.

He also called for maintaining peace and harmony.

"AISPLB will always stand with the All India Muslim Personal Law Board on this issue," Abbas said.

In Jaipur, the spiritual head of the Ajmer dargah welcomed the verdict and said the judiciary is supreme and everyone should respect the decision.

"It is the time to present a united face before the world because entire world is looking at India today," Dargah Deewan Zainul Abedin Ali Khan said.

He said that respecting and honouring the laws of the land is the basic Islamic teaching.

"We now need to concentrate on the development of self and the nation," Khan said

The hearing in the politically and religiously sensitive temple-mosque land dispute in Ayodhya was the second longest proceedings in the history of the Supreme Court which had lasted for 40 days.

The high-voltage hearing in the Ram Janmabhoomi-Babri Masjid dispute involving 2.77 acres of land had commenced on August 6 and concluded on October 16, and the apex court pronounced the verdict on Saturday.