The opposition 'Grand Alliance' in Assam is set to collapse with the state Congress on Monday announcing that it has decided to break ties with Badruddin Ajmal-led All India United Democratic Front and the Bodoland Peoples Front. 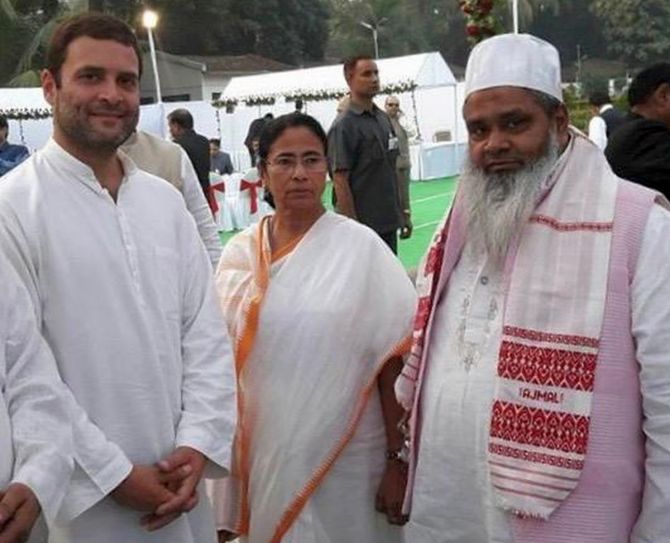 The AIUDF said the unilateral decision of the Congress is unfortunate.

A core committee meeting, chaired by state Congress president Bhupen Bora, observed that the AIUDF's "behaviour and attitude in relation with the Bharatiya Janata Party has baffled the members of the Congress", party spokesperson Bobbeeta Sharma told reporters.

"The continuous and mysterious praise of the BJP and the chief minister by AIUDF leadership and senior members have affected the public perception of the Congress party," she said.

Sharma said that after a long discussion, the core committee members of the state Congress unanimously decided that AIUDF can no longer remain a partner in the 'Mahajot' and the AICC will be informed accordingly.

AIUDF legislature party leader Hafiz Bashir Ahmed in a statement said the Congress' unilateral decision to remove the party from the alliance was "unfortunate" as it is the need of the hour for secular and democratic parties to remain united and "intensify efforts to keep the communal BJP in check".

"The alliance should not be weakened due to the personal views of a few persons. The AIUDF has always opposed the BJP's communal policies and will continue to do so in the future. The Congress should not create a divide in the alliance but consider ways to strengthen it," Ahmed added.

A discussion was also held on the alliance with the BPF as its leadership has been expressing their unwillingness to remain a part of the Grand Alliance on various platforms, she said.

The state Congress president was given full authority to make a decision on the matter and it was decided to inform the high-command the decision to break ties with the party, Sharma said.

The meeting also endorsed the earlier decision of giving full authority to the state president, working presidents and chairman of the legislative assembly committees constituted for the forthcoming by-polls to decide on election strategy and candidate selections, she said.

The 10-party 'Grand Alliance' or 'Mahajot', led by the Congress, was formed ahead of this year's assembly elections in the state.

The alliance had won 50 seats in the assembly polls with Congress securing 29 seats, the AIUDF 16, the BPF four and the CPI-M one.

The Congress' Lok Sabha MP Gaurav Gogoi had hinted on Friday that it was time for the party to be "independent of the Grand Alliance" as it is the only party that can "take on the BJP".

He had admitted that there was a need to strengthen the organisation of the party across the state, including in those constituencies where there are MLAs of the Alliance, the Kaliabor MP said.

Inside the Assam assembly, the party may still consult other opposition parties if and when the BJP government brings anti-people policies, he added.

The Congress Core committee meeting also adopted a resolution expressing deep concern over the unprecedented deteriorating relation with Mizoram and Meghalaya over the border dispute and condemned the alleged failure of both central and state governments in maintaining cordial relations between neighbouring states.

The Centre has also "not given due importance" to Assam's flood and erosion problem and the core committee resolved that the party will launch a strong protest on the issue.

The killing of truck drivers in Dima Hasao by insurgents and the daylight murder of Nandita Saikia, a college student of Dhemaji, with a machete proves that the government has failed to control the law and order situation in the state, Sharma claimed. 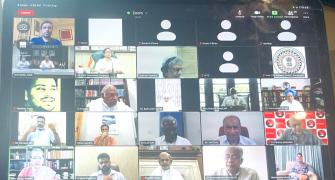 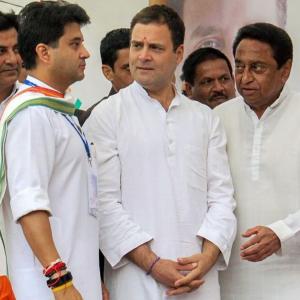