As Delhi’s air quality continued to register alarming deterioration, the Supreme Court on Monday prohibited the plying of 15-year-old petrol and 10-year-old diesel vehicles in the national capital region even as the Bharatiya Janata Party-led central government and the Aam Aadmi Party dispensation indulged in a blame game over the rising air pollution. 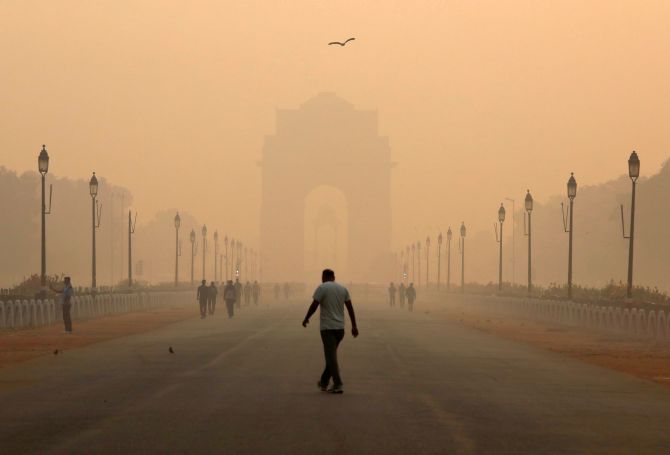 IMAGE: A man walks in front of the India Gate shrouded in smog in New Delhi. Photograph: Anushree Fadnavis/Reuters

Meanwhile, according to a World Health Organisation report, over one lakh children under five years of age died in India in 2016 due to exposure to toxic air. The report noted that about 98 per cent of children in the same age group in low and middle-income countries were exposed to air pollution.

In the report, titled ‘Air Pollution and Child Health: Prescribing Clean Air’, deaths of about 600,000 children under 15 years of age in 2016 were attributed to the joint effects of ambient and household air pollution.

Another report by Greenpeace also presented a grim picture of India’s pollution level.

According to the report, three of the world’s largest nitrogen oxide air pollution emission hotspots, which contribute to formation of PM2.5 and ozone, were in India, with one in Delhi NCR region.

Authorities also asked 113 industries to shut down for not converting to Piped Natural Gas in the national capital. 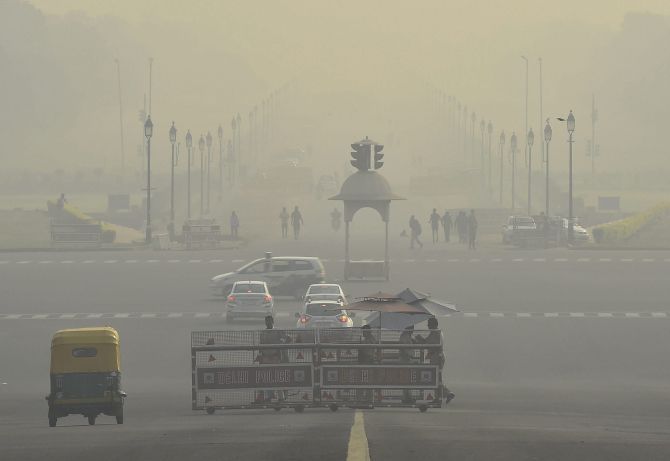 The Supreme Court on Monday prohibited the plying of 15-year-old petrol and 10-year-old diesel vehicles in the national capital region and made it clear that such vehicles would be impounded if found on the roads in Delhi-National Capital Region.

Terming as “very critical” and “horrible” the prevailing pollution situation in Delhi-NCR, the apex court directed that a list of 15-year-old petrol and 10-year-old diesel vehicles be published on the website of the Central Pollution Control Board and transport departments of the NCR area.

The BJP-led central government and the AAP dispensation accused each other of not taking effective steps to curb it.

Chief Minister Arvind Kejriwal blamed the Centre, and the governments of Haryana and Punjab and accused them of not being ready to do anything despite the efforts by the Aam Aadmi Party government.

“The pollution was in control in Delhi throughout the year, but this time (winters) every year, Delhi has to face severe pollution due to the Centre, BJP-led Haryana and Congress-led Punjab governments,” he tweeted in Hindi.

“Despite our all-out efforts, they are not ready to do anything. Farmers of these two states are also fed up with their governments,” he said.

Vardhan said Kejriwal “cannot absolve himself of responsibility” by targeting the Centre and the state governments.

He said the Centre had undertaken a series of measures like Graded Response Action Plan for Delhi and the national capital region and setting up of air purifiers.

“This is your responsibility. We have been tracking farm fires with the help of satellites and compared to previous years, it has been consistently going down. It is wrong to blame Haryana, Punjab and the central government. Your work is being done by the central government,” Vardhan said.

Delhi BJP chief Manoj Tiwari asked the party-ruled municipal corporations to step in to tackle the rising air pollution in the city, claiming the AAP government had “failed” to take effective measures for it.

Meanwhile, the Supreme Court-appointed Environment Pollution Control Authority agreed to the recommendations made by the CPCB for the first 10 days of November when the air quality is likely to deteriorate further due to festival season and stubble burning in neighbouring states.

The recommendations included closure of all construction activities that generate dust pollution between November 1 and 10.

The Central Pollution Control Board-led task force also recommended shutting down of coal and biomass based industries, excluding thermal and waste-to-energy plants, from November 4 to 10, intensification of efforts by Transport Department to check polluting vehicles and controlling traffic congestion in Delhi-NCR between November 1 and 10.

Authorities asked 113 industries to shut down for not converting to Piped Natural Gas. Of the total units, 67 are located in Bawana and Narela industrial areas, an official statement said Monday.

In a meeting chaired by Lt Governor Anil Baijal here, officials said 1,368 show cause notices and 417 closure directions were issued against polluting units by the Delhi Pollution Control Committee.