Sri Lankan police on Saturday fired tear gas and water cannons to disperse anti-government protestors here as the ongoing agitation demanding the resignation of President Gotabaya Rajapaksa over the worst economic crisis intensified as it entered its 50th day. Sri Lanka is near bankruptcy and has severe shortages of essentials from food, fuel, medicines and cooking gas to toilet paper and matchsticks. For months, people have been forced to stay in long lines to buy the limited stocks.

Sri Lanka's economic crisis has created political unrest with a protest occupying the entrance to the president's office demanding his resignation continuing for the past 49 days.

The crisis has already forced prime minister Mahinda Rajapaksa, the elder brother of the president, to resign on May 9.

There has been an intense call for President Gotabaya Rajapaksa to also resign however, he has refused to do so.

Saturday marks the 50th day of the 'Go Rajapaksa' protest which has also seen the death of a parliamentarian.

The Sri Lankan police have on occasions used force to control the unrest.

"The continuous protest demanding the resignation of President Gotabaya Rajapaksa has reached its 50th day today. The day is to be marked with protest marches with wider participation," the organisers said.

News website newsfirst.lk reported that tear gas and water cannons were fired by police to disperse protestors near the World Trade Centre in Fort, Colombo.

According to the Colombo Gazette newspaper, a protest was staged near the residence and office of Prime Minister Ranil Wickremesinghe, disrupting traffic along Flower Road.

The protest was staged by 'No Deal Gama', it said.

Sharing a video of the protest in which the agitators were seen carrying black flags and shouting anti-government slogans, the Daily Mirror newspaper tweeted, '50 days of the Galle Face Struggle -- People's Representatives and many civil activists march from Kollupitiya Junction to Galle Face.'

The protest against the government started on April 9 when agitators walked into the Galle Face promenade central Colombo and camped there blocking the entry gate to Rajapaksa's presidential office.

They expanded activities at the site by naming it GGG 'Gota Go Gama (village)'.

A reference library, a theatre, a political podium with cultural and religious events have been set up at the protest site.

Volunteers delivered food and drink at the site as numbers swelled in participation with every passing day.

The chorus for the resignation of Rajapaksa gathered momentum as people came to be hit by the ongoing worsening economic conditions - long queues at fuel pumps and cooking gas stores, scarcities of essentials, businesses slumping, extended hours of power cuts.

The participants feared a crackdown on the protest on a few occasions.

But the backing of the legal community saw authorities restraining themselves against physically attacking the site for fear of facing rights abuse charges.

However, on May 9, a group of government supporters did attack the site injuring the protesters.

A backlash followed with forcing the country into an island wide curfew.

In the violence ensued at least 10 people died. Properties of some 78 ruling party politicians were attacked or suffered arson.

Mahinda Rajapaksa, his son Namal and several seniors are still being quizzed on the violence.

At least two ruling parliamentarians are remanded for their responsibility to attack the peaceful protesters.

Meanwhile, police said they had obtained a court order preventing the protesters from entering certain key roads of the central Colombo's Fort area.

"Our struggle would only end when the Rajapaksa family leaves the political arena and be hauled before the people's court for all the wrongs they have done," Chameera Jeewantha, a protester who has been at the site all 50 days said. 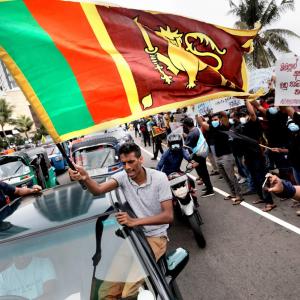